A Causal Role for Long-Term Potentiation in Chronic Pain 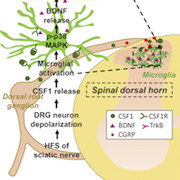 Chronic pain has long been associated with peripheral nerve damage or local inflammation. However, chronic pain often has no clinically obvious cause. A new study proposes that long-term potentiation (LTP)—a long-lasting strengthening of synapses between nerve cells based on recent patterns of activity—in response to high-frequency stimulation (HFS) could underlie this phenomenon, with microglia being a particularly important contributor.

A study from researchers in the US and China led by Long-Jun Wu, Mayo Clinic, Rochester, Minnesota, US, shows that induction of LTP at C-fiber synapses in the spinal cord upon HFS of the sciatic nerve produced chronic pain-like behavior in mice. Importantly, this LTP did not cause damage to the stimulated sciatic nerve; nor did it spur inflammation. Furthermore, the authors identified microglial brain-derived neurotrophic factor (BDNF) and colony-stimulating factor 1 (CSF1) as critical factors for spinal LTP and subsequent pain.

“This was a very interesting paper, providing evidence for a causal link between LTP and chronic pain,” according to Makoto Tsuda, Kyushu University, Fukuoka, Japan, who studies the interaction between glial cells and neurons but was not involved in the current work, in an email to PRF. “In particular, the fact that the authors demonstrated a requirement for microglia in HFS-induced chronic pain without any damage to peripheral nerves is quite interesting because the current concept of microglia-mediated pain modulation has mainly been established in the context of nerve injury.”

LTP at synapses in the hippocampus is considered one of the mechanisms underlying memory formation. In the pain field, LTP, particularly at C-fiber synapses in the dorsal horn of the spinal cord, is viewed as a synaptic model of chronic pain. But exactly how LTP leads to pain in rodents is not fully understood, and concerns over injury to the stimulated nerve or the presence of inflammation has confounded the interpretation of findings from this model.

“When we talk about plasticity in the nervous system, there is a big debate about what the function of this plasticity actually is. LTP is thought to be crucial for memory formation. However, the evidence to prove that isn’t very strong. So the aim for this study was to really dig deep and try to understand what role spinal plasticity plays in pain, and can this plasticity directly translate into pain behaviors,” Wu told PRF.

To better understand how LTP at C-fiber synapses can cause pain, co-first authors Li-Jun Zhou, Jiyun Peng, and colleagues developed a nerve stimulation protocol that would reliably produce LTP but not damage the stimulated nerve. By electrically stimulating the sciatic nerve in mice at various frequencies and voltages, the team discovered that HFS (100 Hertz [Hz], 10 volts [V], for 0.5 milliseconds, repeated four times every 10 seconds) reliably induced LTP at C-fiber synapses in the dorsal horn. There was no evidence of nerve damage using this protocol, as expression of ATF3, a common marker of nerve injury, did not differ between HFS and sham control mice; nor were there differences in markers of macrophages and neutrophils, revealing an absence of inflammation.

Following induction of LTP, the animals displayed increased sensitivity to mechanical and thermal stimulation of the hind paw, compared to controls. This persisted for up to 21 days after HFS. Since previous work showed that spinal LTP depended on N-methyl-D-aspartate (NMDA) receptors (Liu and Sandkühler, 1995), the researchers administered an NMDA antagonist via intrathecal injection to the animals. As expected, this blocked spinal LTP and subsequent pain hypersensitivity.

“We really tried to separate the injury from the plasticity,” Wu said. “In the pain field, peripheral nerve injury is used to induce pain and even spinal plasticity. What this study shows is that you can titrate the HFS stimulation to cause plasticity with no obvious or overt damage to peripheral neurons and yet still produce long-lasting pain behaviors. It’s quite remarkable and exciting to us that only four seconds of HFS in total can produce such profound and persistent effects,” said Wu.

The researchers went on to examine the spinal cords of mice following HFS, and discovered upregulation of calcitonin gene-related peptide (CGRP) in the dorsal horn that persisted for at least 21 days, with immunohistochemistry showing an increase in CGRP-positive terminals there. As with hind paw sensitivity, the increase in CGRP afferents was prevented by an intrathecal NMDA receptor antagonist.

HFS also caused an increase in spinal microglial markers. Activation of microglia has been demonstrated previously in numerous animal models of neuropathic pain and is sufficient to elicit LTP at C-fiber synapses, independently of neuronal activation (Clark et al., 2015).

As sciatic nerve HFS led to upregulation of CGRP-positive terminals, Tsuda thinks it’s likely they play an important role in the development of LTP and subsequent pain, though exactly how crucial they are is uncertain.

“It would be interesting to see whether selective HFS stimulation of CGRP-positive peptidergic C-fibers is sufficient to produce microglia activation, LTP, and chronic pain hypersensitivity,” according to Tsuda.

Homing in further on microglia, the researchers selectively ablated these cells from the central nervous system of mice. Sciatic nerve HFS was now unable to induce spinal LTP; nor did it lead to mechanical or thermal hypersensitivity. Additional experiments would show that the microglia were crucial for the development, but not the maintenance, of pain in response to HFS.

Microglial activation is known to cause the release of BDNF, which has been linked to chronic pain. So the researchers generated mice in which they selectively deleted BDNF from microglia. Compared to controls, these animals showed attenuated LTP and mechanical hypersensitivity upon HFS. Further, previous research using the spinal nerve ligation model of pain showed that BDNF depletion from microglia reduced pain in male but not female mice (Sorge et al., 2015). However, in the current study, BDNF depletion had the same effect in both sexes, suggesting differential roles of BDNF in nerve injury versus non-nerve injury models of chronic pain.

How exactly HFS activated spinal microglia remained an outstanding question for the investigators. Previous reports suggested that nerve injury results in the expression of the cytokine colony-stimulating factor 1 (CSF1) in injured dorsal root ganglia (DRG) neurons. CSF1 can activate microglia by binding to CSF1 receptors expressed on those cells.

So the researchers measured CSF1 levels in response to HFS and discovered a gradual upregulation of CSF1 in DRG neurons, from one to seven days after HFS. In the dorsal horn, CSF1 was increased in CGRP-positive neurons, suggesting that this cytokine may play a role in spinal plasticity following HFS. Expression of the CSF1 receptor was also increased on spinal microglia, which the researchers could prevent by administering an anti-CSF1 antibody 30 minutes before HFS. This suggested that CSF1 signaling was necessary for spinal microglial activation following HFS. 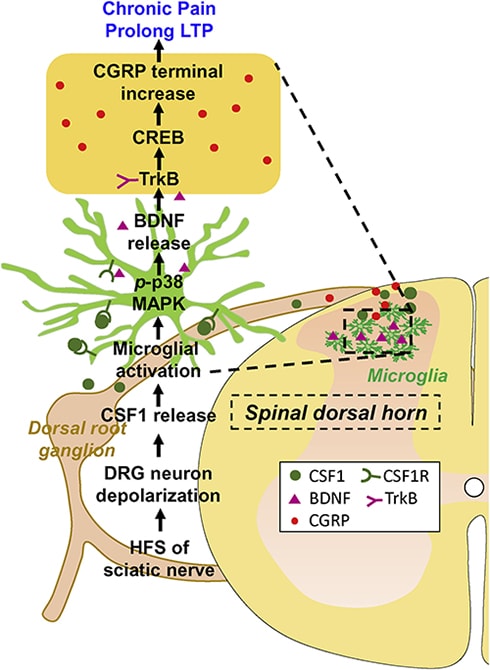 Interdependence in the pathway

Both BDNF and CSF1 play key roles in LTP-induced hypersensitivity in mice in the current study. But whether they work independently of each other, or if there is a relationship between them, remained unknown. So the investigators next administered an anti-CSF1 antibody to mice before HFS. This reduced both BDNF levels and CGRP upregulation in response to HFS, compared to mice that underwent HFS without the antibody.

Next, examining cultured spinal cord slices, the researchers observed that CSF1 produced increases in microglial markers, as well as in CSF1 receptor and BDNF expression, and these changes were reduced by co-treatment with a p38 mitogen-activated protein kinase (MAPK) inhibitor. As p38 MAPK is exclusively expressed in dorsal horn microglia and its activation is crucial for microglial activation, the in vitro findings suggest that CSF1 is sufficient for microglial activation and BDNF release.

The role of microglia in chronic pain is well appreciated. However, exactly how these cells initially become activated is still uncertain. Based on the current results, it may hinge on the pain condition at play.

“It all depends on the context,” said Wu. “During peripheral nerve injury, ATP released from dorsal horn neurons will bind P2X4 channels on microglia and activate them. In the context of HFS-induced LTP and subsequent pain, there is no obvious nerve injury, and we found that CSF1 is upregulated and likely plays a major role in activating microglia. Regardless of the different inputs or methods of activation, there is likely to be convergence downstream, possibly on p38 MAPK, as we and others have shown.”