A New Proposed Definition of Pain

After nearly 18 months of collaboration, the IASP Definition of Pain Task Force is suggesting a new definition to better reflect current knowledge 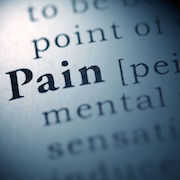 After nearly 18 months of collaboration, the IASP Definition of Pain Task Force is suggesting a new definition to better reflect current knowledge

The International Association for the Study of Pain (IASP) Definition of Pain Task Force has proposed an update to the organization’s official definition of pain to help better guide future pain research and patient care. After reviewing decades of research, the Task Force now suggests that pain be defined as “an aversive sensory and emotional experience typically caused by, or resembling that caused by, actual or potential tissue injury,” and is also providing six accompanying notes for clarity.

Researchers who spoke to PRF agree that an updated definition is long overdue and applaud the effort to create one. However, they also say that the specific definition proposed by IASP is insufficient. This will likely set the stage for lively discussion and debate.

“I would have liked to see something that was more evidence-based rather than to just reassert the same phrase that reflected the conventional wisdom 50 years ago,” said Kenneth Craig, University of British Columbia, Vancouver, Canada, who was not involved with the Task Force. “We now recognize that pain beliefs, attitudes, threat appraisals, coping mechanisms, and attention are exceedingly important. Even thinking about pain can have powerful implications for how severe the experience is. The continued emphasis on sensory and emotional factors is based on the outdated biomedical perspective on pain. The definition should more directly acknowledge cognitive and social factors as integral to the experience.”

The new proposed definition has been published on the IASP website, with an open call for public comments and criticism until September 11, 2019. The Task Force is chaired by Srinivasa Raja, Johns Hopkins University, Baltimore, US.

More than sensory and emotional aspects

It’s no easy task for anyone to define what pain is—pain researchers and clinicians themselves tend to squabble over what should and shouldn’t be included in the details. But one thing most agree on is that the definition published by IASP back in 1979—that pain is “an unpleasant sensory and emotional experience associated with actual or potential tissue damage, or described in terms of such damage”—does not reflect the field’s current understanding of pain, which has emerged from decades of research and clinical care experience over the past 40 years.

“There have been dramatic transformations in the way in which we understand and treat pain since that definition was first formulated, and restricting one’s characterization of pain to its sensory or emotional qualities ignores a vast literature of research,” said Craig.

That’s one reason why Craig, along with Amanda Williams, University College London, UK, published a topical review in PAIN three years ago calling for a review and revision of the IASP definition to help guide policy, research, and clinical care in the future (Williams and Craig, 2016).

“Pain is a very common thing,” said Williams. “But it’s quite a challenge to come up with a simple definition that can explain it well. It’s one of the reasons why Dr. Craig and I said what was needed was a working party of people from different areas to tackle the job.”

So, in 2017, the IASP Council heeded that call by creating the Definition of Pain Task Force to do just that. Raja was tapped to lead the effort.

“Judith Turner, who was president of IASP at the time, wanted a group of international experts with broad areas of expertise who could work together to revisit this old definition, incorporating our new knowledge surrounding pain,” he said. “That effort was further supported by her successor in the role, Lars Arendt-Nielsen.”

Raja convened a group of 13 experts, including himself, who have collaborated on a monthly basis over the past year-and-a-half, reaching out to specific subject matter experts when needed, to better hone the definition and its accompanying notes, to reflect current thinking about pain.

“It’s a challenge. Pain is not a new condition, but everyone has their own perception of what it is,” said Nanna Brix Finnerup, Aarhus University, Denmark, who serves on the Task Force. “It’s even more difficult to come up with a single sentence that can express that kind of complexity.”

Yet despite those challenges, the Task Force ultimately agreed on a suggested revision to IASP’s earlier definition of pain—again, “An aversive sensory and emotional experience typically caused by, or resembling that caused by, actual or potential tissue injury.”

“We tried to capture the full range of the pain experience,” Raja said. “Our hope was to create a definition that could be used by everyone in the pain field, from patients who are experiencing pain to the clinicians who are treating it and the researchers who are studying it. The ultimate goal is that it can be used to inform new research avenues, as well as improve patient care.”

Raja said the Task Force worked hard to consider a definition from all angles.

“We were committed to recognizing the complexity of the pain experience, in addition to the one-line definition,” he said. “The Task Force further devoted significant effort in refining the accompanying notes to emphasize that biological, psychological, social, and life experiences also influence an individual’s pain experience.”

Yet he acknowledges that there is likely room for fine-tuning. It’s why IASP made the proposed new definition available to the public and is seeking comment. The Task Force will take this feedback into account, and provide a summary and final recommendation to the IASP Council in November 2019.

A spirited discussion in the making

It’s highly likely that the feedback on the proposed definition and accompanying notes will result in significant discussion—and ample disagreement.

Miroslav Backonja, University of Washington, Seattle, US, who was not on the Task Force but has worked on past taxonomy efforts for IASP, said that the proposed definition, while improved, sidesteps the question of whether pain is only a symptom or a medical condition with its own clinical course.

“That is conveniently absent, to start,” he said. And, in the proposed accompanying notes, Backonja continued, “it says pain is always a subjective experience. For many, the choice of term ends the conversation right there—it’s subjective so we don’t need to continue the discussion, as opposed to stating that pain is a person-specific experience, which would open conversation about it. With so much now known about pain, we should dive deeper into what we see in the clinic as well as what we can extrapolate in terms of mechanisms from the research. We could do more here.”

Williams, who also did not participate in the revision process, added that she is glad to see the word “unpleasant” replaced with “aversive,” to better highlight how distressing the experience of pain can be. But in her opinion, the new definition hasn’t changed all that much from the old one. She agrees that putting emphasis on the subjective nature of the pain experience may be an issue.

“The problem with making such a big issue of subjectivity is that it discounts people who can’t verbally report pain, as well as animals, who we know also experience pain,” she explained. “It’s not that long since the field thought babies didn’t experience pain. So this definition is a bit limiting.”

Craig said that the proposed definition missed an opportunity to provide a “richer characterization of the nature of the pain experience," he said.

“With all of the research that has occurred since the last definition was published, this new proposed definition should better reflect our current understanding of the nature of pain,” he said. “This definition would be better if the cognitive and social features of the experience were acknowledged and, when referring to tissue injury, the term ‘associated with’ was used, rather than ‘caused by.’ ”

Craig has already submitted his feedback to the Task Force; Williams and Backonja said they would be doing so shortly. Raja said that he and his team welcome their and others’ comments.

“We are open to input from everyone,” said Raja. “There may be important suggestions that will come in that mean we should reconvene and consider. We plan to meet after the five-week open period to review them to see if any edits should be made. It’s important to us that this definition is comprehensive and can work for the greater research and clinical communities.”