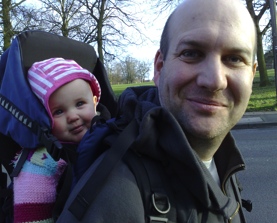 We’ve known for a while that people with chronic back pain move differently. Normally when you are going to wave your arm or leg the deep spinal muscles kick in just beforehand, perhaps to provide stability.  In back pain the activity of some of the deep back muscles is delayed in response to spine and limb movements. This has been demonstrated in various studies, most of them by Paul Hodges and an array of collaborators.  The delay appears to be a reliable marker that something different is going on with spinal control in back pain. It’s an idea that has permeated the culture of physical therapies in recent years, with patients all over the world desperately trying to suck in their bellies and the ghost of Joseph Pilates enjoying the fact that his rehab regimes have gone global!

A new study, just published in the journal Clinical Neurophysiology by Jesse Jacobs and colleagues from the University of Vermont, shines more light on this topic. They asked whether this back pain-related delay in abdominal muscle activity was reflected in the way the brain controls those muscles in response to arm movements. Comparing 10 patients with back pain with 10 healthy people, they used electroencephalography (EEG) to measure where, when and how much the cortex was active when participants were asked to quickly raise and lower their arms. They also looked at an EEG feature called the Bereitschaftspotenial (probably the best word you will read today, call it “the BP”!):a good marker of the brain activity that prepares this early switch-on of spine muscles. This is tricky labwork and requires impressive technical skill.

They found much wider cortical activation in the back pain group, with both sides of the brain showing activation (those without back pain only showed activity on the opposite side to the raised arm). This adds to the body of evidence demonstrating increased cortical reactivity in back pain patients. They also found that “the BP” was related to the delay in activation of the spinal muscles in the back pain sufferers. This is the new and most interesting part, as it provides more evidence that the very specific delays observed in trunk muscles in low back pain are reflected by precise changes in brain function. Those changes go right to the top.

Jacobs and colleagues suggest that the expansion of cortical involvement might reflect an increasing role for higher brain centres in controlling movement after low back pain; that movement becomes less automatic and more “executive”. They found no relationship between these changes and measures of pain or disability and conclude that the findings support the theory that after back pain people adopt long term alterations in the way that they move, even after pain improves, and that this in turn supports a model of back pain where abnormal movement and loading of spinal tissues is at the core of the problem, and retraining posture and movement are a possible solution.

This study is clever stuff, it is an impressive technical achievement and the authors clearly know what they are doing. However, it left me with a few questions.  For example the sample size studied is unlikely to have been sufficient to accurately interrogate relationships within the data. That coupled with the very low levels of pain and disability seen in the back pain group might explain the lack of relationship between these changes and pain and may well have masked other telling relationships. Other studies that have related brain changes to pain have done so in patients with more severe pain and disability. Performing this study with a bigger group with more severe pain would be fascinating and might uncover more of the detail in this picture.

Miserly methodological issues aside I would suggest an alternative possible interpretation to the findings. These results provide more evidence that alterations in brain function are characteristic of low back pain. It is possible that the changes in movement and spinal control are epiphenomena. If spinal motor control is indeed becoming “more executive” then perhaps treatment should be focused on factors that might influence this such as cognition, body perceptions, and the meaning of the pain to the individual.

Neil O’Connell is a researcher in the Centre for Research in Rehabilitation, Brunel University, West London, UK.

Lorimer: Actually, Neil is an experienced and highly respected clinical physiotherapist who has widened his scope of practice to also become a researcher and teacher of new physiotherapists.  He is a clear thinker and astute observer. Based on my conversations with him over the years, he is one of the sharpest tools in the shed.  We were thrilled that he accepted our invitation to cast a discerning eye over this paper because he is as well placed as anyone on the planet to do it. Thanks Neil.

Objective: To determine whether low back pain (LBP) associates with altered postural stabilization and concomitant changes in cerebrocortical motor physiology.

Methods: Ten participants with LBP and 10 participants without LBP performed self-initiated, voluntary arm raises. Electromyographic onset latencies of the bilateral internal oblique and erector spinae muscles were analyzed relative to that of the deltoid muscle as measures of anticipatory postural adjustments (APAs). Amplitudes of alpha event-related desynchronization (ERD) and of Bereitschaftspotentials (BP) were calculated from scalp electroencephalography as measures of cerebrocortical motor physiology. Results: The APA was first evident in the trunk muscles contralateral to the arm raise for both groups. Significant alpha ERD was evident bilaterally at the central and parietal electrodes for participants with LBP but only at the electrodes contralateral and midline to the arm raise for those without LBP. The BP amplitudes negatively correlated with APA onset latencies for participants with (but not for those without) LBP.