From Macrophages with Love: How Mitochondria Transfer to Nociceptors Resolves Inflammatory Pain 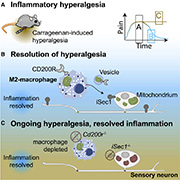 “This paper is really significant for both the pain field and neuroscience in general. It’s one of the first papers to demonstrate in vivo transfer of mitochondria between immune cells to neurons. It shows that the immune system resolves pain by restoring mitochondrial health in nociceptors by transferring healthy mitochondria into these neurons,” said Geoffroy Laumet, a pain researcher from Michigan State University, US, who was not part of the study,

The paper was published in Neuron on 16 February 2022.

Monocyte-derived macrophages are well understood to infiltrate the DRG and reduce pain sensitivity in conditions of neuropathic pain (Niehaus et al., 2021). Macrophages do this by being programmed into different states. At one end (M1), you have pro-inflammatory, pain inducing states, and at the other end (M2), there are the anti-inflammatory, regenerative cells that stimulate recovery. It’s this M2 macrophage state that interested Eijkelkamp and his team in the context of inflammatory pain.

The authors began by investigating whether tissue inflammation is sufficient to cause macrophage infiltration into the DRG, as is seen after traumatic nerve injury. Here, they used the well-established carrageenan model of acute inflammatory pain. Injecting carrageenan into the hindpaw of mice caused stereotypical mechanical hypersensitivity which was resolved in three to four days.

Since the timing of macrophage infiltration corresponded with the reduction in mechanical hypersensitivity, the authors hypothesized that the macrophages were adopting an anti-inflammatory state to reduce pain.

To test this hypothesis, they selectively depleted macrophages in the DRG by injecting diphtheria toxin (DT) into mice expressing the DT receptor on monocytes and macrophages. These mice failed to resolve inflammatory mechanical hyperalgesia, resulting in inflammatory pain which lasted for at least six days. These findings indicated that macrophages and neurons are interacting very early after transient inflammation to resolve the pain.

“The fact that a small inflammation is enough for macrophages to infiltrate the DRG within a day or two is really amazing. There’s a strong case in the literature that immune cells contribute to pain, but it wasn’t clear if they were involved in early inflammation. These findings show DRG macrophages are engaged already at the beginning of inflammation and involved in pain resolution,” Eijkelkamp commented.

These findings pointed to a curious fact. Peripheral inflammation resolves within several days of carrageenan injection; however, pain persisted long after this timepoint in macrophage-depleted mice. This suggested a pain sensitization that was independent of tissue inflammation, causing the authors to explore whether macrophages are required for resolving pain.

To test this more specifically, they assessed what happens to pain resolution if you suppress the immune system during carrageenan inflammation. Here the authors injected dexamethasone, a steroid which reduces inflammation, into macrophage-deficient mice after carrageenan administration. The authors reasoned that the steroid would be unable to reduce the persisting pain after the hindpaw inflammation had resolved in macrophage-depleted mice. This is exactly what happened.

“We saw that even decreasing paw inflammation [with dexamethasone] itself didn’t stop the pain in mice lacking macrophages in the DRG. Instead, you need macrophage-neuron signaling in the DRG to stop the pain,” said Eijkelkamp.

But which pathway was causing this M2-like macrophage-led recovery? For one, the authors knew that neurons have a high metabolic demand, and had previously published a paper showing that deficiency in mitochondrial function (i.e., metabolism) in sensory neurons prevents the resolution of inflammatory pain (Willemen et al., 2018).

“Coupled to this, we knew from the stroke literature that astroglia cells can donate mitochondria to neurons in the brain, so we thought maybe there was a similar mechanism at work in the DRG to resolve pain after inflammation,” said co-first author Hanneke Willemen.

To investigate whether macrophages were indeed transferring mitochondria to DRG neurons to restore their metabolic function, the team set up a MitoTracker experiment. Here, they tested whether fluorescently labeled mitochondrial markers were being transferred from macrophages to DRG neurons, in vivo, three days after carrageenan injection, when pain recovery is underway.

The results were striking – mitochondria were seen in neurons that contained macrophage-derived label and had to be transferred from macrophages to DRG neurons, most prominently in DRG neurons that innervate the inflamed paw.

“This was a big experiment and everyone was excited to know whether our hypotheses were true. There were six of us analyzing all the data, and Niels [Eijkelkamp] offered us a bottle of wine if we were able to complete analysis of the data the same week. We were all measuring each neuron individually from a lot of mice. You can imagine the hours involved,” Willemen said.

“I even got my son involved. We sat together circling the neurons," said co-first author Michiel van der Vlist.

Subsequent flow cytometry experiments found that macrophages released CD45+ extracellular vesicles containing mitochondrial markers. The hypothesis was that these mitochondria-containing vesicles were sufficient for pain resolution after carrageenan injection. To test this, the authors intrathecally injected vesicles isolated from macrophage supernatant after carrageenan injection, which caused a rapid but transient resolution of inflammatory hyperalgesia.

The authors next hypothesized that the transfer of mitochondria-containing vesicles to neurons was mediated by receptor-ligand docking interactions. The team knew that M2-like macrophage vesicles express the CD200 receptor (CD200R) and neurons express the ligand CD200. The thought was that neurons deficient in CD200 wouldn’t be able to receive the mitochondria-containing vesicles, thereby preventing pain resolution.

“But that’s when the project nearly crashed. The CD200 knockout mice didn’t show anything, exactly the same pain dynamics as wild-type mice. However, our former department head Eric Hack nagged us to try the experiments again in CD200 receptor knockout mice, and then it worked – we saw the lack of pain resolution,” van der Vlist said.

This was clear evidence that mitochondria transferred from macrophages to DRG neurons and resolve inflammatory pain, and that it was mediated by CD200R. However, the team were aware of another CD200R ligand – iSec1 – which they found to be present surrounding DRG neurons.

A new mechanism of pain resolution

“The findings in this paper have led to many interesting new questions. For example, is it the whole part of the mitochondria that is transferred, or only a part of it? What is the help signal that is released from nociceptors that signals macrophages to transfer mitochondria? Could it be possible that people with chronic pain have perturbations in producing these neuronal help signals? These are intriguing ideas that the field can tackle next,” Laumet said.

Laumet was also intrigued by the possibilities of new pain treatments down the line.

“I think this paper brings a new avenue of therapeutic strategy for pain. It might be possible to somehow administer the mitochondria or mitochondria-containing vesicles to patients with chronic pain. In other fields, an emerging therapeutic strategy is to inject naked mitochondria (in liposomes) into target tissues to treat chemotherapy-induced cognitive symptoms (Alexander et al., 2021). The findings in this paper indicate this strategy could also be an interesting potential pain treatment,” offered Laumet.

Eijkelkamp agreed, mentioning that they were investigating similar strategies in animal research.

“We’re interested if we now see mitochondrial complications in chronic pain patients. For example, could we use nanoparticles with mitochondria to treat chronic pain? It’s an exciting possibility,” Eijkelkamp said.