From animal models in research to potential opioid bans, controversies in pain research took center stage during the 2022 NAPS debates. 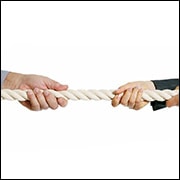 From animal models in research to potential opioid bans, controversies in pain research took center stage during the 2022 NAPS debates.

Editor’s note: The North American Pain School (NAPS) took place 19-24 June 2022 in Montebello, Québec City, Canada. NAPS – an educational initiative of the International Association for the Study of Pain (IASP) and Analgesic, Anesthetic, and Addiction Clinical Trial Translations, Innovations, Opportunities, and Networks (ACTTION), and presented by the Quebec Pain Research Network (QPRN) – brings together leading experts in pain research and management to provide trainees with scientific education, professional development, and networking experiences. This year’s theme was, “Controversies in Pain Research.” Five of the trainees were also selected to serve as PRF-NAPS Correspondents, who provided firsthand reporting from the event, including interviews with NAPS’ Visiting Faculty members and Patient Partners, summaries of scientific sessions, and coverage on social media. Here, PRF-NAPS Correspondent Jessica Archibald, a PhD candidate at the University of British Columbia, Canada, provides coverage of the debates that took place during the final evening of NAPS.

Debates can be traced back to the philosophical and political gatherings of ancient Greece and India. Within this formal discourse, opposing arguments can be heard and their subject matter understood – with all of their complexities. Bidirectional communication between those with contrasting views is a valuable skill to develop – not only as human beings but as scientists.

Using argumentation to challenge scientific discoveries and theories enhances how these concepts can progress and helps to shape clinical standards in our society. It’s not surprising that the North American Pain School organizers recognize the value of scientific debate and choose to include this type of gathering during the NAPS experience.

The famous NAPS debates take place during its final evening. Audience members are asked to declare their opinion on the matter at hand both before and after the debates, and whichever team’s argument has inspired the most audience members to change their initial opinion is declared the winner. After a three-course dinner, two debates took place (one between trainees and one between postdoctoral fellows) to argue their opposing views on the following statements:

Trainees: Mice and rats are inappropriate models of human pain, and can and should be replaced in current research.

Postdoctoral fellows: Opioids for chronic non-cancer pain should be banned from use.

Briefly, nociception – the nervous system detecting a noxious stimulus that has or could damage tissue – is a complex process of chemical and electrical signals. However, it’s not nearly as complex as pain itself, which is nociception processed through the filters of an individual’s life history (i.e., their (epi)genetic history, past experiences, hopes, fears, etc.). So the question is: Are animal models accurate models of human pain, and should they be replaced?

These trainees began by highlighting the mechanistic understanding of pain we have derived from animal research using the poignant example of the calcitonin gene-related peptide (CGRP). CGRP is widely distributed in nociceptive pathways, is involved in migraine pathophysiology, and has levels that can be measured in plasma or cerebral spinal fluid. Preclinical studies using animal models found that CGRP levels have a positive correlation with pain and – after CGRP's release from neurons – can act as a neuromodulator that increases glutamatergic signaling, enhances neurotransmission, and leads to central sensitization that contributes to headache (Schou et al., 2017Iyengar et al., 2017). As a result of this research, medications that block these effects of CGRP have become a welcome addition to the resources utilized by clinicians to treat migraine. Many patients have an improved quality of life thanks to this discovery. The “Con” Team argued that if we replace animal models of pain, such discoveries would be stifled.

Their second argument was a practical one – costs and feasibility. Experiments utilizing primate or human participants require more funds and more time. Without animal research, they highlighted the lack of drugs, vaccinations, and medical procedures we would have today and cited numerous historical examples such as ending polio, rubella, and smallpox.

These trainees began by reminding the audience that pain is a complex multifactorial phenomenon (i.e., biopsychosocial) and that understanding an individual’s subjective experience is vital to developing better pain management strategies. Beyond nociception, they emphasized the importance of the individual’s life history, previous experiences, negative states of mind (e.g., helplessness and catastrophizing), as well as their social environment. To highlight this concept, the team discussed the gate-control theory.

The gate-control theory proposed by Melzack and Wall in the 1960s is an integrative model of nociception and pain that implies there is an interaction between the psychological and physiological (Melzack and Wall, 1965). This theory emphasizes the significant role that psychosocial factors play in the perception of pain. The term “gate-control” refers to the proposed mechanism of a “gate-like” function modulating the number of afferent impulses from the periphery entering the spinal cord at the dorsal horn through inhibitory processes at the neuronal level. It is proposed that higher cortical functions (i.e., “top-down modulation”) contribute to this gating mechanism where afferent impulses are modulated – illustrating a link for psychological phenomena to directly affect the experience of pain.

The final vote tally of this debate was the closest result in the history of NAPS after the winners were declared victorious by a single vote. The audience ultimately sided with the “Con” Team and believe that we should continue utilizing animal models in pain research. This slim victory points to a changing landscape in our understanding of pain, and the prevalence of its biopsychosocial model.

Opioids have often prevailed as a panacea dating back to Sumerian clay tablets. Over the years, these compounds have influenced and advanced medicine as a source of anesthesia and pain relief, as well as leading to discoveries such as the endogenous opioid system. Following the recognition of pain as the fifth vital sign, there was increased pressure on healthcare providers to prescribe scheduled and efficacious medicine. Today, we are aware of the devastating consequences resulting from these prescribing practices, and their continuing effects on our society. This has led us to re-evaluate the role and utilization of these drugs, but the challenge is to reduce opioid misuse while not limiting patients who need these drugs. So the question for the second debate at NAPS became: Given the lack of compelling evidence for their efficacy against chronic non-cancer pain, should opioids be banned from use in this context?

These fellows started the debate by focusing on the word “ban.” They argued that banning all opioids for chronic non-cancer pain patients is falling into the classic “pendulum swing” trap, and there is likely a “middle ground” for the use of opioids in this demographic. Opioids are a powerful pain management resource when used in a safe, informed, and individualized manner with appropriate dose prescription and monitoring practices. They proposed that instead of an outright ban, we should instead focus on cooperative tapering, which allows for the flexibility of individualized cases without destabilizing and creating new health risks for vulnerable populations. Furthermore, having opioids banned would likely lead to an increase in illegal supply chains, resulting in more unsafe and unreliable substances.

This team then made an emotional plea to the audience by telling the story of Kyle – a chronic non-cancer pain patient who was prescribed opioids for his postsurgical pain. Opioids affected Kyle’s quality of life, and he became “another statistic” as tolerance and addiction became a part of his daily life. The team explained that “the medical system had provided opioids in an unsafe way, and it is now our duty to be vigilant in making sure a bigger mistake does not occur.” They went on to argue that resources could be better utilized to provide opioid education to patients. As an example, they asked the audience to envision a woman suffering intense pain due to endometriosis, and the one thing that brings her pain from a 10 to a 4 are opioids. Would you take that away from her? Is that ethical? She meets regularly with her doctor, she is educated on the risks, and takes them 1-2 days a month. They urged the audience to trust that people can make their own informed decisions.

This team made well-informed arguments as to why we ought to consider banning opioids prescribed for chronic non-cancer pain. They informed the audience on how policy decisions are based on population level data, and – considering that the harms of the opioid epidemic are so severe and widespread – it is time to make a shift to safer non-opioid alternatives. The opioid crisis emerged from insufficient regulation, was market and profit driven and has led to thousands of deaths and severe addiction for a small, clinically relevant effect that may be comparable to less harmful treatments.

These fellows suggested we ban opioids, not with the intention of stigmatizing, but providing better options for chronic non-cancer pain patients and a safe, supervised tapering strategy. They also argued that banning opioids would promote the exploration of more effective pain management strategies. This is an intermediary step in the process of shifting into a world with effective pain management strategies whose side effects do not lead to addiction and thousands of deaths.

The final vote tally was not nearly as close as the previous debate, and the NAPS audience decided we should not ban opioids for chronic non-cancer pain. For the “Pro” Team and their supporters, this once again illustrates a changing landscape as we actively reconsider opioid treatments to manage pain. 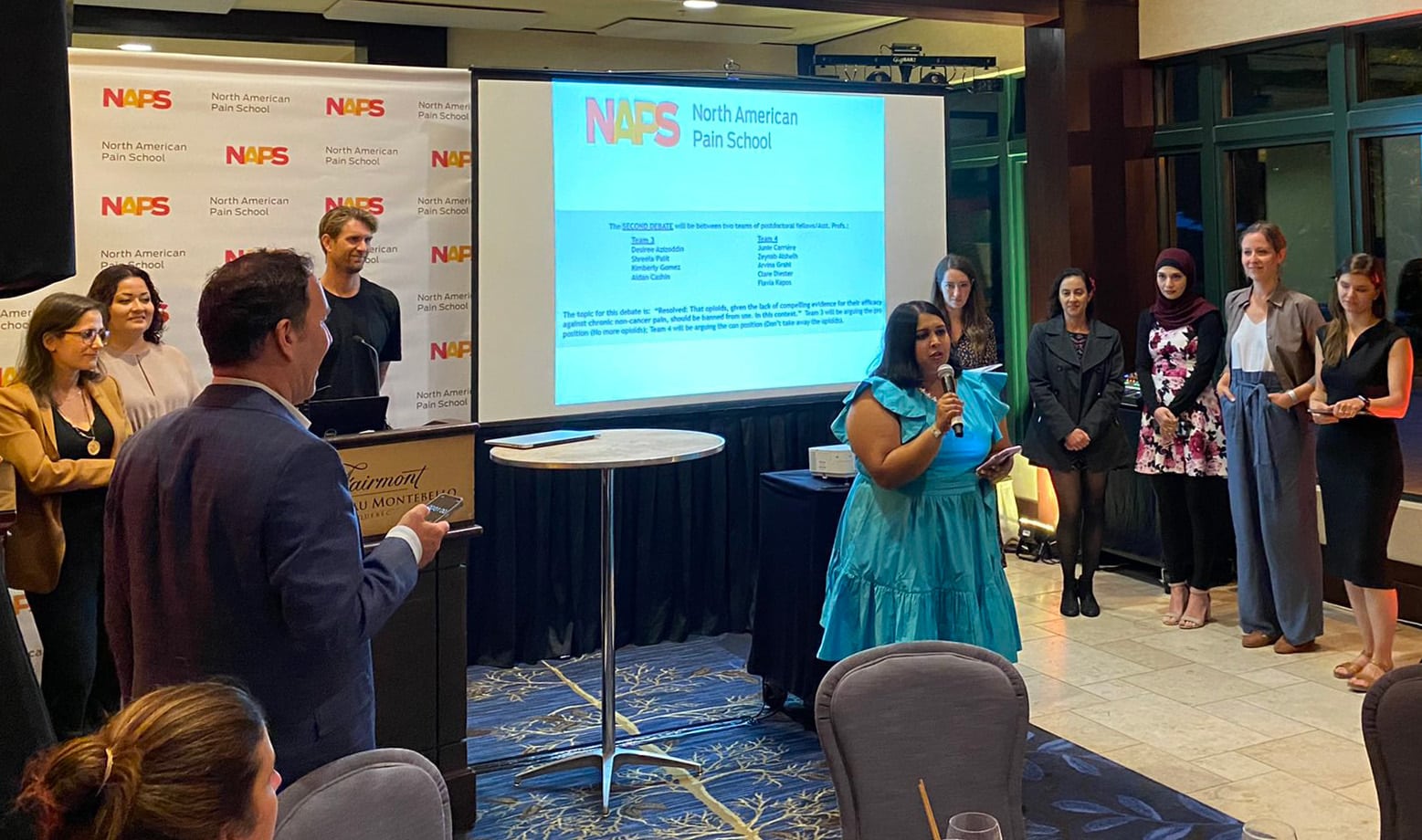 I am confident that everyone in the audience benefited from listening and participating in these debates – even if someone was required to defend a different point of view from their own. My hope is that we all step into scientific debate with curiosity.

Jessica Archibald is a PhD candidate at the University of British Columbia, Canada. You can follow her on Twitter – @ArchibaldJes.