How Does Dopamine in the Anterior Cingulate Cortex Impact Chronic Pain? 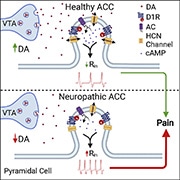 Activity in the anterior cingulate cortex (ACC), a region of the medial prefrontal cortex (mPFC), has been reported to be involved in pain processing both in human and animal studies (Johansen et al., 2001Kwan et al., 2000). How the ACC modulates the symptoms of chronic pain, however, remains to be discovered. A recent study, led by Philippe Séguéla's group at McGill University in Montreal, Canada, has shown that interactions between dopamine receptors and hyperpolarization-activated cyclic nucleotide-gated (HCN) channels decrease ACC excitability and provide top-down pain inhibition.

"This study was built upon previous discoveries from our lab and others, showing the role of monoamines (i.e., dopamine, serotonin, and norepinephrine) in the ACC in chronic pain. We were particularly interested in dopamine, as studies in patients with Parkinson’s disease report non-myogenic pain, alluding to a link between dopamine deficits in pain. We also know that dopamine activity in the mesolimbic pathway is mechanistically linked to chronic pain, but less is known about the contributions of the mesocortical pathway in the ACC, another brain region rich in dopaminergic inputs,” commented Séguéla, describing the rationale of the study to PRF.

"There are several unknowns about chronic pain, but one of the most critical questions to address is the brain mechanisms underlying pain responses. This study adds to the field by providing a framework for treating pain disorders via targeting dopamine signaling in the cortex,” offered Loren Martin from the University of Toronto, Canada, who was not involved in this study.

This work was published on 30 November 2021, in Cell Reports.

Using slice electrophysiology, the authors first assessed how dopamine changes the excitability of pyramidal neurons in layer 2/3 of the ACC, a region of the mPFC implicated in pain. They observed that more than half of the pyramidal neurons in the ACC are inhibited after application of dopamine. A deeper assessment of these cellular responses revealed an increase in threshold for action potential firing and a decrease in input resistance, suggesting an overall reduction in cellular excitability. Importantly, once dopamine was washed out, the activity of these pyramidal neurons normalized, indicating that dopamine-induced inhibition was reversible.

To understand which dopamine receptor is responsible for this inhibition, the authors interrogated the involvement of D1 and D2 receptors by using selective ligands. They found that only the D1 receptor agonist SKF81297, like dopamine, inhibited ACC pyramidal neuron activity.

An important electrophysiological property of ACC pyramidal neurons is persistent firing, a cellular substrate for working memory. “Patients with chronic pain also commonly report deficits in working memory; this high comorbidity suggests a mechanistic link between the two pathways,” said first author Kevin Lançon from McGill University. In this study, the application of SKF81297 significantly decreased, or suppressed, persistent firing in a majority of ACC pyramidal neurons. Through this series of in vitro electrophysiological investigations, the authors collected substantial evidence showing that D1 receptor activation exclusively inhibited activity of pyramidal neurons in the ACC.

To understand whether these responses were driven by changes in the expression of HCN channels, or the availability of existing HCN channels, HCN-channel mediated currents (Ih) were measured. A voltage-dependent increase in Ih was reported after application of dopamine, indicating that dopamine facilitates the activation of existing HCN channels rather than altering their expression on the cell surface. Importantly, in brain slices collected from neuropathic mice who underwent spared nerve injury (SNI), Ih was decreased at physiological membrane potentials, suggesting abnormal HCN channel activity in neuropathic pain.

Building on the concept that dopamine signaling is critical for pain modulation, the authors tested the effects of systemic L-DOPA, a dopamine precursor, on neuropathic pain behaviors. Animals were also given carbidopa, which inhibits the conversion of L-DOPA to dopamine, to prevent the peripheral metabolism of L-DOPA. They observed, regardless of whether L-DOPA was administrated continuously or 2 weeks after SNI, that L-DOPA significantly reduced mechanical and cold allodynia (i.e., pain evoked by innocuous stimulations), as measured by von Frey and acetone tests.

Brain slices were also collected from the SNI animals treated with L-DOPA for electrophysiological assessment. The authors reported comparable cellular excitability between sham and L-DOPA-treated SNI animals. The Ih dysfunction observed in SNI animals was also reversed after L-DOPA treatment. These findings indicate that ACC neuronal characteristics translate to neuropathic pain behaviors, and modulation of dopaminergic pathways could be a viable strategy for treating allodynia that results from nerve injuries.

A hallmark feature of neuropathic pain is non-evoked, ongoing pain. In collaboration with Frank Porreca from the University of Arizona, US, pain aversiveness was determined using the conditioned place preference (CPP) paradigm in SNI mice. “Allodynia is a surrogate pain measurement, which isn’t the same as ongoing pain in humans. Since animals have no ability to ‘self-report’ pain to human experimenters, the next best thing would be to study their learned behaviors. Animals can be trained to associate a certain cue/environment that relieves their pain, and the CPP paradigm allows us to assess their motivation to seek such cues,” Porreca told PRF.

In this study, bilateral injections of SKF81297 in the ACC produced a place preference in SNI animals, indicating a relief of neuropathic pain aversiveness via D1 receptor activation. The authors then queried whether the motivation to seek pain relief is related to dopamine signaling. To test this, SNI animals were treated with gabapentin, a gold-standard therapy for neuropathic pain. The authors discovered that if ACC dopamine signaling was blocked via administration of SCH23390, no gabapentin-place preference can be detected. Interestingly, the impact of dopamine signaling on pain relief place reference can be generalized to other types of pain. In animals with post-surgical pain, administration of SCH23390 also blocked lidocaine-place preference.

“Results from this study suggest that a dysregulation of corticolimbic dopaminergic signaling may lead to a ‘top-down’ pathological exacerbation of chronic pain states. This could facilitate the development of pain therapies that work to restore cortical dopaminergic homeostasis, or interfere with ACC hyperexcitability. This also highlights the potential of developing drugs that target the dopamine system, either as a replacement of opioid-based treatments, or as an adjunct,” said Martin, discussing the impact of the study with PRF.

The clinical use of dopamine-based therapy in chronic pain, however, must be cautioned, as the manipulation of dopamine signaling can lead to motor side effects. “The interaction between dopamine receptors and HCN channels shown in this study is a new mechanism that can be exploited for the development of future analgesics,” Séguéla told PRF. “As chronic pain patients often report deficits in executive functioning, future studies could also dive deeper into how ACC activity controls working memory for the development of therapies which improve overall high-order cortical functioning in chronic pain states,” Lançon added when discussing the clinical translation of this study’s findings to PRF.