A new survey study shows that people living with fibromyalgia are already substituting CBD for opioids and other pain drugs, despite what the clinical trial evidence says. 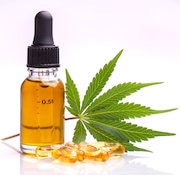 A new survey study shows that people living with fibromyalgia are already substituting CBD for opioids and other pain drugs, despite what the clinical trial evidence says.

Fibromyalgia is a common condition characterized by widespread pain and accompanying symptoms like fatigue, sleep problems, and cognitive issues. The few medications available to treat fibromyalgia, including the antidepressants duloxetine and milnacipran, and the anti-seizure drug pregabalin, only provide modest pain relief, with many patients experiencing significant side effects. As such, many people with fibromyalgia are looking for alternatives to help them manage their pain, including cannabidiol (CBD), one of the active ingredients (known as cannabinoids) in cannabis.

Now, a new online survey study reports that nearly three-quarters of almost 900 study participants with fibromyalgia who used CBD did so as a substitute for other pain medications, including opioids. The researchers, led by Kevin Boehnke, University of Michigan Medical School, Ann Arbor, US, and colleagues further show that most of these study participants reported that they decreased or even stopped the use of their pain drugs. In addition, the participants who used CBD in lieu of pain medications reported greater pain relief than those who did not substitute CBD. Interestingly, these real-world findings contrast with recent work showing a dearth of evidence to support the use of cannabis and cannabinoids to ease chronic pain.

The findings are “quite striking,” said Ian Gilron, Queen’s University, Kingston, Canada. “They speak to a huge need for better treatments and better clinician supervision. The results clearly show, because of the lack of effective treatments, that people are willing to try new things, even if the evidence for their effectiveness isn’t quite there yet. It’s something that both researchers and clinicians should be paying attention to,” according to Gilron, who was not involved with the new research.

The natural landscape of CBD use

The new study is a secondary analysis of a large online survey the researchers had conducted previously to understand how common CBD use is in people with fibromyalgia (Boehnke et al., 2021). That earlier work found that approximately 60% of 2,701 study participants with fibromyalgia had tried CBD in the past or currently used it. About one-third of participants currently used CBD, primarily for pain, anxiety, and sleep. Many reported improvements in their symptoms.

In the new study, Boehnke and colleagues wanted to learn whether the survey participants with fibromyalgia were using CBD in place of pain medications, especially in light of the 2018 US Farm Bill. This bill legalized cannabis plant products provided they contain no more than 0.3% tetrahydrocannabinol (THC), the psychoactive ingredient that causes marijuana’s hallmark “high” sensation. The result was that the market was soon flooded with a variety of different CBD products.

“We know that people are very interested in using CBD and, now that the 2018 Farm Bill passed, it’s becoming much more widely available,” Boehnke explained. “Given that so many FDA [US Food and Drug Administration]-approved drugs aren’t well tolerated by people with fibromyalgia, my colleagues at the University of Michigan and the National Association of Fibromyalgia and I were interested in understanding the natural landscape of CBD’s use.”

In the new study, Boehnke and colleagues included 878 adults from the original survey who reported they were experiencing chronic pain. The researchers collected demographic information and also asked questions about CBD use, including whether study participants substituted it for other medications, and whether it helped their pain and associated symptoms.

The researchers discovered that 72% of participants reported substituting CBD products for nonsteroidal anti-inflammatory drugs (NSAIDs; substituted by 59% of participants), opioids (53%), gabapentinoids (35%), and benzodiazepines (23%). What’s more, of that group, most participants reported either reducing or stopping use of other pain medications. Boehnke said the extent to which people were substituting and then weaning off other medications surprised him.

The survey results also indicated that most participants substituted CBD for their pain medications because they wanted fewer side effects and better management of their symptoms. And, those who substituted indeed reported that they had larger improvements in health and pain, compared to those who did not substitute.

“We saw that 50% of those substituting CBD products for other drugs completely stopped using the other medications,” Boehnke said. “While there are a lot of limitations in this kind of survey, especially with regard to the different products people were using or had access to, that is a big number. Most people said they were making the switch because of the side effects of other medications. And while CBD is not without risk, if you look at the side effect profile, people don’t die of CBD overdoses. They don’t get intoxicated on it. And they feel like CBD is helping them.”

The “real” world versus clinical trials

In 2018, the International Association for the Study of Pain convened a task force to look at the evidence supporting the use of cannabis and cannabinoids (including CBD) for the treatment of pain. Gilron, who was a member of the task force, said the group of 20 clinicians and researchers did a series of systematic reviews to investigate both the efficacy and safety of cannabis and cannabinoids as a treatment for chronic pain conditions.

In a position statement published in March 2021 in PAIN, the group concluded: “Reviews of preclinical research and clinical safety and efficacy of cannabis and cannabinoids for pain relief have identified important research gaps. Due to the lack of high-quality clinical evidence, the International Association for the Study of Pain (IASP) does not currently endorse general use of cannabis and cannabinoids for pain relief. IASP recognizes the pressing need for preclinical and clinical studies to fill the research gap, and for education on this topic.”

Gilron said that making any recommendations about the use of substances like CBD is a challenge. These are substances that have been used for thousands of years – there are even ancient Chinese medical texts that reference it – but there is a lack of randomized, controlled clinical studies to test whether the substances actually work compared to placebo.

“When doing these sorts of reviews, we want to look at the highest-quality evidence, which, for the most part, are randomized controlled trials,” he said. “There were actually no trials of cannabinoids for fibromyalgia that met our review’s eligibility criteria. That means there’s no good quality evidence to say whether these substances work or not, which, of course, informed our position statement. But because we cannot currently endorse the use of CBDs doesn’t mean we dismissed the lived experiences of people with pain who found benefit with their use.”

When Boehnke was asked about how he squares his new results with the IASP Task Force conclusion, he said that he doesn’t see a conflict.

“They look at the most rigorous studies – clinical trials. The absence of evidence means that you can’t draw firm conclusions about whether CBD works. But the fact of the matter is that people are turning to CBD and saying they find it helpful. While we don’t have the clinical trials, I think it’s just as important to understand what people are actually doing in the real world versus what the science says they should do.”

Gilron said the current study results are important and can help researchers with the design of future studies to test the efficacy of CBDs for pain management.

“The survey identified different subgroups of people who seem to get benefit,” he said. “That could give us some direction in creating studies in the future. Because, if we are going to recommend CBD to help with pain, we need more high-quality research. And we need to do studies where people haven’t already tried it so we can see what the effect really is.”

Boehnke added that he thinks the survey results highlight the need for clinicians to have more upfront conversations with their patients about what those patients may be doing to help manage their pain.

“Doctors need to talk to their patients about whether they are currently using CBD or are contemplating using it, and it’s important they do so in a way that enhances the therapeutic alliance between them,” he said. “They need to know what kind of products they are using. The results show us that many people are already using CBD, so when we can have a better sense of what people are doing and why they are doing it, we are in a better position to help people come up with more effective strategies to live with these conditions.”