Behavioral and electrophysiological findings support a complex picture of pain in invertebrates. 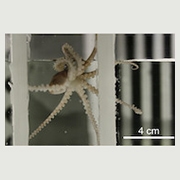 Behavioral and electrophysiological findings support a complex picture of pain in invertebrates.

While it is generally recognized that invertebrates experience the nociceptive aspects of pain, in the form of reflexive responses to noxious stimuli, there has been much debate about whether they experience the affective component of pain. Now, new research in octopuses may have settled the question.

Using conditioned place preference (CPP) and conditioned place avoidance (CPA) to assess affective pain experience, Robyn Crook, San Francisco State University, US, demonstrates that invertebrates – octopuses, in this case – avoid a place that had been associated with a noxious stimulus and prefer a location that had been paired with relief from pain. Crook also shows that octopuses exhibit discriminative pain experience including grooming, guarding, and concealment of injury. Finally, electrophysiology experiments show that the animals process noxious sensory information in the central nervous system.

“The data are so clear – there’s just no way to argue with any of this,” said Jeffrey Mogil, McGill University, Montreal, Canada, who was not involved with the study. “The other thing that’s nice about the paper is that there was a very focused question, and she’s given a very focused answer, and she’s done it in three different ways,” Mogil told PRF, referring to the affective pain, discriminative pain, and electrophysiology experiments.

Previous research from Crook and colleagues revealed that the nociceptors of invertebrates, in this case squids, display peripheral sensitization as well as spontaneous activity after bodily injury (Crook et al., 2013). Further, in 2014, Crook reported that this nociceptive sensitization is a way for squid to avoid predation by a natural fish predator, providing an evolutionary explanation for the phenomenon (Crook et al., 2014Walters, 2018, and recent issue of the Philosophical Transactions of the Royal Society B).

That invertebrates experience at least some aspects of pain is not a new idea, but to date there were few studies exploring the pain experience in cephalopod mollusks like octopuses. So in the new study, Crook began by using a CPP paradigm, creating a novel three-chambered CPP box designed to assess the affective component of pain in octopuses. In the first session of the experiment, an octopus could freely explore all chambers for 15 minutes, with Crook noting the chamber the octopus preferred the most. In the second session, the octopus received an injection of acetic acid (AA) or of saline, and was confined to the initially preferred chamber for 20 minutes. In the third and final session, the octopuses could once again freely explore all chambers.

“Showing these more subtle cognitive assays, where you ask the animal to make a decision based on how they feel, is a better way of capturing what really matters to us as problematic pain, which is the suffering component,” said Crook.

Crook also examined the behavior of octopuses with AA-induced pain who received lidocaine right before being confined to their least preferred chamber. Those animals strongly preferred that chamber, whereas saline-injected animals showed no preference for the lidocaine-paired chamber. This demonstrated that the analgesic's relief from pain was rewarding only to octopuses experiencing pain and was not innately rewarding. 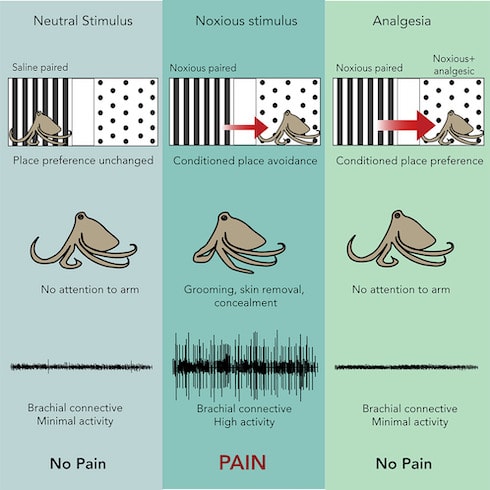 …and discriminative pain experience, too

Crook also measured various pain-related behaviors to learn if octopuses could experience the discriminative aspects of pain – the location, quality, and intensity of pain. The AA-injected octopuses indeed groomed and concealed the area of injection for the entire 20-minute trial period, behaviors that ceased upon lidocaine injection. The grooming in the AA-injected octopuses resulted in the removal of a small area of skin covering the injection site. This behavior was never displayed in saline controls or after lidocaine injection.

“What we saw that was interesting is that the wound attention behavior was really different from what we saw in other types of studies that we’ve done. I suspect that what it’s doing is trying to release the noxious stuff that is in the skin,” explained Crook. “We know that in the wild, as they move about in the reef, octopuses are stung by anemones, for example. So this is presumably a behavior that has evolved to deal with envenomation.”

In mammals, noxious sensory information is processed in the brain, which is required for affective and discriminative pain experience. To assess whether this held true for the octopuses, Crook made electrophysiological recordings from the octopus brachial connectives, which run between the central nervous system and the first major ganglion at the top of the arm nerve cord.

Injection of AA resulted in spontaneous (ongoing) nociceptor firing lasting more than 30 minutes. This neural activity was quickly silenced upon lidocaine injection overlying the area where AA had been injected.

With regard to evoked activity, Crook used von Frey hairs to provide mechanical stimulation at four positions along the octopus arm. She observed increased evoked activity after AA injection, which was suppressed after injecting lidocaine.

“She's got the beautiful electrophysiology backing up the behavior,” said Mogil.

Together, the findings support the claim that octopuses have a complex pain experience involving both affective and discriminative components. Crook is now moving toward demonstrating – by studying squid and cuttlefish – that other invertebrates also experience affective components of pain.

Time for a rethink?

The study's finding of a complex pain experience in a cephalopod means it's time for a more careful consideration of how humans treat invertebrates.

“It has implications for regulations on angling, which is a big thing in the world, and for practices such as throwing live lobsters into boiling pots,” said Mogil. “And so, at some point, there are ethical issues that need to be addressed as well.”

Crook agrees. “I think there are a lot of interesting questions that come up when you show an animal like an octopus that diverged from our lineage at least 500 million years ago has managed to evolve much of the same capacity” for pain experience, Crook told PRF.

“From the perspective of animal welfare and ethics," she continued, "those are really interesting questions that force us to think about the way we treat animals, but also from the broader perspective of evolutionary biology, there’s this big question that guides my research, which is how many different ways there are to make a complex brain,” Crook said.

"And it’s not just a really basic task, like a reflex, that we share. It is a deeply complex task of the emotional aspects of pain that suggests there’s strong evolutionary pressure driving the selection of affective state,” said Crook.