Resolving Pain: Macrophages Are the New Boss in Town 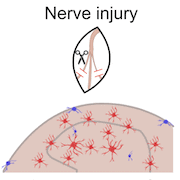 When it comes to chronic nerve injury pain, pro-inflammatory immune cells – microglia, in particular – receive the lion's share of attention. But new work shows that a specific population of macrophages found in the spinal cord activate an anti-inflammatory program after peripheral injury that may contribute to the resolution of neuropathic pain.

Using single-cell RNA sequencing, researchers led by Mark Zylka, University of North Carolina, Raleigh, US, show that mice with nerve injury developed prolonged pain, as expected. But those with a sham surgery – a more superficial injury – recovered, thanks to the macrophages, in this case a spinal population marked by expression of the macrophage mannose receptor.

The macrophages from the superficially injured animals also had increased expression of the anti-inflammatory mediator CD163 and alleviated nociceptive hypersensitivity via the cytokine interleukin-10. Further, hypersensitivity could be eased in nerve-injured animals by increasing macrophage CD163 expression. Together, the results point toward macrophages as key players in the resolution of pain and whose activity is blunted during nerve injury.

“It’s a beautiful story,” said Annemieke Kavelaars, a neuroimmunologist at MD Anderson Cancer Center, Houston, US, who was not involved in the study. “It’s very strong work – very convincing data.”

Homing in on a macrophage cell type using scRNA-seq

“We wanted to take a step back and take a broader look to find novel cell types involved in pain resolution, to look more generally at these processes over time,” rather than focusing on microglia, said Zylka.

To model neuropathic pain, in this case in adult male mice, first author Jesse Niehaus, a graduate student in the lab, performed spared nerve injury (SNI) surgery or a sham surgery that delivered a more superficial tissue injury (SI) in which the nerve is exposed but left unharmed. Then, 14 days later, he performed the scRNA-seq analysis on lumbar sections of the spinal cord.

Niehaus categorized the roughly 20,000 cells into 66 cell types and then broadly classified those into seven principal cell types, according to their molecular identity. Then he measured the relative proportions of those cell types in the SNI and SI animals.

Two cell types, which the researchers named Macro1 and Macro2, were similar macrophage cell types that expressed the macrophage mannose receptor (Mrc1). Genetically, these cells resembled border-associated macrophages, which localize at connective tissues in the central nervous system. Accordingly, Niehaus found the MRC1+ macrophages closely associated with the spinal meninges and vasculature of the spinal cord.

The team next quantified meningeal (MM) and perivascular (PVM) macrophages in naive (uninjured), SI, and SNI mice over 14 days. The PVM population did not expand significantly from baseline in either SI or SNI mice, but MM cells expanded rapidly after SI but not SNI. An experiment using EdU (a thymidine analog) to label proliferating cells showed that the MM cell population grew after SI but not SNI. Together, the results suggested that SI prompted a macrophage expansion, potentially from both migration and proliferation, a response that was somehow blunted in nerve-injured animals.

In order to distinguish between subpopulations of spinal cord cells involved with injury, Niehaus and colleagues then performed gene expression analysis on the 66 subtypes detected in the earlier experiment. After injury, the researchers saw changes in the expression of genes involved in cell proliferation and in immuno-regulatory pathways. Notably, RNA for an anti-inflammatory protein called cluster differentiation factor 163 (CD163) was reduced in Macro1 and Macro2 cells in SNI animals compared to those with SI. Histological staining showed that CD163 levels increased over time after nerve injury or sham surgery in both MM and PVM cells, but in SNI animals that expression was diminished specifically in MMs relative to SI animals.

“Immune responses are so dynamic over time,” Niehaus said. Following the scRNA-seq experiments, “on the surface level, it was clear that macrophages had the biggest effect,” in both SNI and SI animals, relative to other cell types. But when he tracked the cells over time in the animals, more fine-grained details emerged. “That time course made us see it’s the distinction of superficial versus nerve injury,” where major differences were arising between the SNI and SI animals.

That might have only become apparent because of the way Niehaus designed the control arm of the study. Whereas some researchers simply use uninjured animals as controls, or measure pain responses on the contralateral side from the nerve injury, Niehaus used a sham surgery that is less severe than the nerve injury, but is still a significant trauma in itself. That likely activated the macrophage resolution pathway, which may not have been detected with another type of control. “It was fortunate that we did our controls this way,” he said. 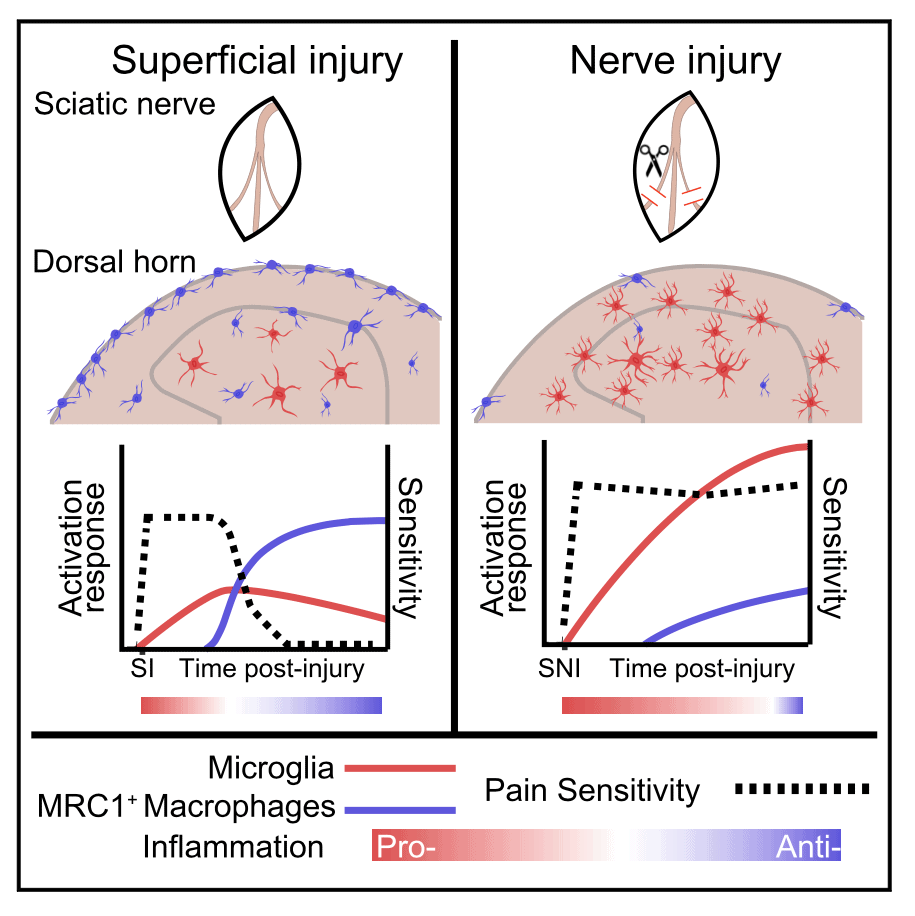 Because I'm the boss

When Niehaus tracked the changes in CD163 over time in SI animals, he noticed that the increase in CD163 levels coincided with the resolution of mechanical hypersensitivity in the mice, suggesting that MRC1+ cells could play a role in resolving the hypersensitivity. To test that, the researchers depleted the mice of the Macro1 and Macro2 macrophages.

“Jesse came up with the really good idea to use clodronate” to deplete the macrophages, Zylka said, referring to a chemical that, when endocytosed, induces apoptosis.

The group encapsulated clodronate in liposomes (Lip-C), which they then chemically modified through addition of the sugar mannose (mannosylation). This allowed the group to target Macro1 and Macro2 cells, which recognize mannose through the MRC1 receptor. “Because there were no other cells expressing MRC1, mannosylation was a useful way to target the macrophages,” Niehaus said.

Intrathecal treatment of naive (uninjured) mice with Lip-C had no effect on pain behaviors, but SI animals treated with Lip-C displayed severe mechanical hypersensitivity compared to SI mice treated with empty liposomes. “That was the first hint that macrophages in the sham SI animals were promoting resolution: When the cells were gone, the pain persisted as if the animals were nerve injured,” Zylka said.

SI mice depleted of the macrophages also showed elevated staining for IBA1, a marker of pro-inflammatory, activated microglia. This suggested that the macrophages might keep microglia in check.

“That showed that microglia have a boss, and that boss is the macrophage,” Zylka said.

“That’s clearly what their data show,” Kavelaars said, “that the presence of those macrophages keeps the microglia under control or maybe even actively silences them when they have become activated.”

The team next wanted to know: In nerve-injured animals, could coaxing the macrophages toward an anti-inflammatory state help resolve hypersensitivity? To find out, Niehaus performed the opposite of the depletion experiment. Here, he treated mice intrathecally with mannosylated polyethylenimine nanoparticles (mPEI) containing a plasmid for Cd163, the anti-inflammatory factor, four days after SNI.

But grossly overexpressing CD163 proved to be too much of a good thing, as higher doses of the nanoparticles containing the Cd163 plasmid led to greater expansion of MRC1+ macrophages, but no further improvement in reduction of hypersensitivity.

“It introduced proliferation to the point where you could barely see expression of the mannose receptor. These cells were only proliferating, not expressing receptors,” Niehaus speculated. When he examined the spinal cord, he found the space packed with macrophages.

Consistent with the anti-inflammatory effects of CD163 upregulation, the treated mice also had increased expression of interleukin-10 (IL10), a cytokine shown to promote resolution of nerve injury hypersensitivity. In addition, staining for IBA1 was reduced in animals with upregulated CD163.

Zylka and his team were somewhat surprised that macrophages emerged as the key players, but Kavelaars was not.

“It fits very well with the work we’ve been doing. It’s great to see how, coming from a totally different perspective with this unbiased approach, they ended up at a similar conclusion – that macrophages can actually help resolve pain through an IL10-dependent mechanism,” said Kavelaars (Willemen et al., 2014).

Kavelaars said she would have liked to see the authors investigate whether activation of IL10 receptors on nociceptors might have also contributed to the resolution of pain. She hypothesizes that IL10 working at nociceptors could dampen nerve activity but also may indirectly curb microglial activity. That is a mechanism she has recently been investigating in other models of chronic pain (Laumet et al., 2020).

There is also the issue of sex differences. The experiments in the current study were all performed in male mice, and Zylka plans to continue the project by looking at females, where it’s possible that the mechanism may be different.

“That could be,” said Kavelaars, “but in our hands, in everything we’ve done with resolution [of hypersensitivity], we’ve never seen male-female differences.”

According to Kavelaars, “one other interesting question is, what is activating those macrophages in the SI situation? How do they know what to do?” Kavelaars suspects a role for T cells, but the study did not examine that possibility.

The findings add to an increasingly complex picture of neuroimmune interactions following injury, and how hypersensitivity gets resolved in some cases and not in others; that decision may rest on individual differences in the immune system. In any case, Niehaus said, from a therapeutic perspective, “we want to help the system help itself. The immune system is more elegant in resolution of inflammation than we will ever be.”