Analgesia From General Anesthetics: A “Pain-Off” Switch in the Central Amygdala 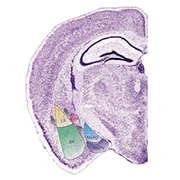 General anesthetics used in surgeries are well known to cause loss of consciousness. This has often been assumed to account for the ability of these drugs to also produce analgesia. A new study in mice now poses a strong challenge to this conventional wisdom.

Researchers led by Fan Wang, Duke University Medical Center, Durham, US, show that analgesia caused by the general anesthetic agents isoflurane and ketamine is independent from the sedative effects of these drugs. Instead, these agents suppress pain through recruitment of an extremely potent “pain-off” switch comprising a distinct population of GABAergic neurons in the central amygdala (CeA). Furthermore, a number of optogenetic and viral-genetic experiments show that these cells produce a profound antinociceptive effect when activated, including in a model of neuropathic pain, and underlie the analgesic effect of isoflurane and ketamine. And, the neurons projected widely throughout regions of the brain known to regulate pain.

“This is a great advance in understanding the pharmacology of anesthetics. They have many effects on the CNS, yet we didn’t know why they exert such a strong analgesic effect. This paper clearly shows that CeA neurons activated by general anesthetics are the most important players for reducing pain” in this circumstance, said Fusao Kato, a pain researcher at Jikei University School of Medicine, Tokyo, Japan, who was not part of the study.

“A critical point of this work highlights that analgesia is not a property of anesthetics. Rather, anesthetics, with very distinct molecular mechanisms, interact with and take advantage of evolved neural circuits involved in endogenous control of nociception,” wrote Nora McCall, Jessica Wojick, and Gregory Corder, University of Pennsylvania, Philadelphia, US, in an accompanying News & Views.

The research and News & Views appear in the July 2020 issue of Nature Neuroscience.

Isoflurane activates neurons in the CeA

In a previous paper, Wang’s group showed that general anesthesia causes sedation by activating a set of neurons in the hypothalamus (Jiang-Xie et al., 2019).

“Classically, we think that humans and animals do not perceive pain under general anesthesia because the brain is largely shut down and that analgesia is a consequence of loss of consciousness,” said Thuy Hua, co-first author along with Bin Chen, both from Duke.

But the group was keen to distinguish the analgesic effects of anesthetics from the sedative consequences. They hypothesized that the analgesia could be due to an active mechanism of pain suppression, possibly by tapping into the same central circuit involved with the sedation.

To test this idea, the authors used the immediate early gene Fos as a marker of neuronal activation to see if brain regions showed activation in response to isoflurane anesthesia. They identified three clusters of Fos-activated neurons: one in the CeA; another in the bed nucleus of the stria terminalis (ovBNST); and a third cluster of sleep-promoting neurons in the hypothalamus that were the focus of Wang’s earlier work.

The investigators turned their attention to the neurons activated by general anesthesia in the CeA (CeAGA neurons), due to the region’s well-known role in endogenous pain modulation. A deeper dive into the identity of these CeAGA neurons using immunofluorescence techniques found that they were all GABAergic, but they showed heterogeneous expression of other molecular markers such as pre-enkephalin (Penk1) and protein kinase C (PKC) delta (Pkc-d). The heterogeneity of the CeAGA neurons meant that selectively targeting them in future experiments would be tricky.

Wang and colleagues therefore turned to Capturing Activated Neuronal Ensembles (CANE). This is a viral-genetic method that allowed them to label and manipulate CeAGA neurons. The authors initially used CANE to express calcium indicators in CeAGA neurons in order to measure their activity in vivo during anesthesia. Strikingly, 90% of CeAGA neurons showed activity during exposure to isoflurane anesthesia.

A common mechanism of action

Different anesthetic drugs such as isoflurane, ketamine, and dexmedetomidine have different receptor targets. Isoflurane, for example, is a GABA receptor agonist, while ketamine is an NMDA receptor antagonist. All of these agents are analgesic, and Wang reasoned that their mechanism of action could be via common activation of CeAGA neurons.

“At low doses, chemically diverse anesthetics all have an antinociceptive effect without inducing loss of consciousness, and therefore I thought that there could be a common mechanism of action,” Wang told PRF.

A “pain-off” switch in the CeA

The group’s experiments so far had shown that a population of neurons in the CeA is activated by isoflurane and ketamine. The authors next investigated what functional role these CeAGA neurons might play in modulating nociception in mice.

For this purpose, the authors turned to optogenetics as a tool to manipulate CeAGA neurons. They used CANE to express the excitatory light-sensitive protein channelrhodopsin-2 (ChR2) or the inhibitory light-sensitive protein enhanced archaerhodopsin (eArch) selectively in CeAGA neurons in different groups of naïve mice. They then measured the sensitivity of the animals to various noxious stimuli.

“This is an important finding,” Hua told PRF, “and shows that groups of GABAergic CeAGA neurons have the bidirectional capability of enhancing and suppressing pain, if silenced or activated, respectively.”

The authors next asked whether CeAGA neurons provide tonic antinociception under normal conditions. They reasoned that if these neurons were silenced in an innocuous environment, then this environment would become aversive to the animals.

Indeed, by combining optogenetics and the conditioned place aversion (CPA) behavioral paradigm, the authors showed that mice avoided the side of a chamber where CeAGA neurons were inactivated. Conversely, using conditioned place preference (CPP), the authors saw that mice preferred the side of the chamber where CeAGA neurons were activated. These findings showed that ongoing activity in CeAGA neurons prevents aversion to the status quo, even in the absence of noxious stimuli.

But what happens during chronic pain? The authors next tested whether activation of CeAGA neurons could alleviate pain following chronic constriction injury of the infraorbital nerve, a mouse model of neuropathic pain characterized by mechanical allodynia in the face.

Optogenetic activation of CeAGA neurons dramatically alleviated mechanical hypersensitivity, as well as “self-caring” pain-like behaviors such as face wiping. Together, the results showed a strong analgesic role of these neurons in a chronic pain model.

The authors next used CANE to express a fluorescent protein in CeAGA neurons in order to trace their projections to other brain areas. The projections were extensive, targeting regions such as the prefrontal cortex, nucleus accumbens, insular cortex, various thalamic nuclei, and pain modulatory regions such as the periaqueductal gray and parabrachial nucleus.

The authors used this tracing method while examining neuronal Fos activation in different brain regions upon formalin injection into the paw. CeAGA neurons projected to many areas of the brain activated upon formalin injection. Strikingly, optogenetic activation of CeAGA neurons reduced neuronal Fos activity in target regions of the CeAGA projections.

“I did not fully expect CeAGA neurons to have such widespread projections,” Wang told PRF “nor that CeAGA neurons can inhibit nociception-elicited activation in almost all of these regions. Some of the CeAGA targets were not previously on my radar as nociceptive processing centers, so I’m excited to find out more about the role of these regions in pain.”

While the authors had shown that ketamine and isoflurane activate overlapping clusters of neurons in the CeA, the investigators had one final experiment to perform: to test whether a low dose of ketamine, which produces analgesia but not sedation, did so via CeAGA neurons.

So the authors optogenetically silenced CeAGA neurons in mice that received capsaicin. Under control conditions, low-dose ketamine reduced nocifensive behaviors such as paw licking in response to capsaicin. But this analgesia was completely abolished upon silencing of the CeAGA neurons.

“One hypothesis is that different anesthetics cause analgesia by directly activating CeAGA neurons, but others act through disinhibition of local microcircuits in the CeA,” Wang said.

Chen and Hua agreed, saying that electrophysiological experiments could help to elucidate those CeA microcircuits. They added that looking at the biomolecular profile of the heterogeneous population of CeAGA neurons might also help to explain how they respond to different anesthetics. Chen plans to do so using RNA sequencing.

Kato said the new study shows the importance of thinking about CeAGA neurons in the context of wider brain connectivity and known endogenous pain modulatory pathways.

“We know that changes in tactile allodynia are partly due to descending modulation from areas such as the RVM [rostral ventromedial medulla], but this paper doesn’t investigate a direct involvement of descending pathways in the analgesic mechanisms of anesthetics like isoflurane. So a question remains: Are these descending pathways required for anesthetic pain relief, or is it only dependent on modulation of higher pain areas by the CeA?”