A Mislabeled Line? Well-Known Itch Afferents Can Code Pain, Too

Whether MrgprA3 neurons drive itch or pain depends on how the cells are activated; distinct spinal cord pathways underlie each sensation 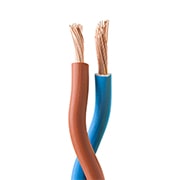 Whether MrgprA3 neurons drive itch or pain depends on how the cells are activated; distinct spinal cord pathways underlie each sensation

How the nervous system encodes pain and itch – two distinct percepts – is hotly debated. A new study challenges the long-standing labeled line theory for itch, which argues that the detection of itch versus pain arises from activation of distinct, non-overlapping groups of peripheral sensory afferents. Instead, evidence now suggests that afferents previously believed to be specific for signaling itch can also signal pain, depending on how they are switched on.

“The idea that the same afferent can be activated in different ways, thereby contributing to both itch and pain, is really exciting,” said Sarah Ross, University of Pittsburgh, US, who was not involved in the study.

The results add to growing evidence that itch afferents, like many other types of C-fibers, can convey more than one form of sensory input. Further, the findings are now prompting pain and itch researchers to revise existing theories for the differential coding of pain and itch.

The new work focused on a sensory afferent population marked by the expression of the Mas-related G protein-coupled receptor A3 (known as MrgprA3 in mice and MrgprX1 in humans) that has been proposed as the beginning of the labeled line for itch. This theory emerged from the previous observation that in mice, activation of MrgprA3 peripheral terminals innervating the skin caused scratching but not pain behaviors (Sun et al., 2017). Likewise, loss of function of the MrgprA3 afferents impaired itch but not pain in mice (Han et al., 2013, Roberson et al., 2013).

But rather than setting out to explore differential coding of pain versus itch, Behrang Sharif, a PhD student at McGill University and the first author of the study, was initially interested in targeting MrgprA3 afferents to develop new experimental models of itch. To do so, he requested the MrgprA3-Cre transgenic mouse line, which provides genetic access to the afferents, from Xinzhong Dong at Johns Hopkins University, Baltimore, US.

“We received the animals under the impression that the MrgprA3 afferents were going to be an itch-specific population,” Sharif said.

The original premise was to drive itch behaviors like scratching in mice by switching on MrgprA3 afferents using the excitatory form of two different genetic tools: chemogenetics and optogenetics. Chemogenetics uses chemical compounds (in this case, clozapine-N-oxide, or CNO) to engage G protein-coupled receptor (GPCR) intracellular signaling cascades in order to ramp up neuronal excitability. In contrast, optogenetics uses light to directly open ion channels, depolarize neurons, and elicit action potentials. In terms of thinking about how these tools might switch on neurons, chemogenetics can be compared to a switch that allows for gradual brightening or dimming, while optogenetics is more of an on/off switch.

Using these strategies, the authors first targeted MrgprA3 afferents in the nape of the neck so that they could compare their findings to previous studies (Sun et al., 2017). Consistent with the idea that MrgprA3 afferents are itch afferents, the group found that when they injected CNO intradermally into the skin to activate MrgprA3 afferent terminals, mice responded by scratching the nape of the neck. This result closely mimicked the effect of injecting the MrgprA3 agonist chloroquine into the skin, suggesting the mice experienced itch, though scratching caused by CNO was less robust than scratching driven by chloroquine.

… and switching on pain?

Then came the plot twist.

“When we optogenetically stimulated MrgprA3 afferents in the nape of the neck with light, we saw aversive responses – mice tended to bite or withdraw from the light source – that weren’t consistent with itch behaviors at all,” explained Séguéla.

So the authors performed analogous behavior experiments, this time activating MrgprA3 afferents in the skin of the cheek. When MrgprA3 afferents were activated with either chloroquine or CNO, mice scratched, indicating that they were experiencing itch. But, once again, optogenetic stimulation produced a different effect: Now, instead of scratching, mice predominantly wiped their cheek, a pain-like behavior, in response to light.

These data suggest that MrgprA3 afferents aren’t truly selective for itch. Rather, they can code for both itch and pain, potentially flipping the labeled line theory on its head.

Discussing these controversial findings, Ross said that “the optogenetic and chemogenetic tools were introduced into the MrgprA3 afferents in different ways [via a genetic allele versus viral expression, respectively], which could lead to differences in the proportions of MrgprA3 afferents that were activated. Nevertheless, the authors manipulated the same type of neuron with the two tools and clearly saw different behaviors.”

“The labeled line theory is so prevalent within the community that we were really surprised to find multimodality within these neurons,” said Séguéla.

Also surprised by the findings – and still in need of a little more convincing – was Mark Hoon, National Institutes of Health, Bethesda, US, who was not involved with the research.

The authors shared an additional concern: that the pain behaviors resulting from optogenetic stimulation of MrgprA3 afferents might be the by-product of genetically manipulating the neurons. To address this possibility, they instead manipulated an ion channel called P2X3 that is native to nonpeptidergic neurons (including those expressing MrgprA3) and is known to drive pain behaviors when activated.

“Using more natural conditions, we were able to demonstrate a role for MrgprA3 neurons in pain in non-transgenic mice. For us, that removed a lot of the concern about artificial stimulation of neurons via opsins,” said Séguéla, referring to the light-sensitive proteins used in optogenetic experiments. 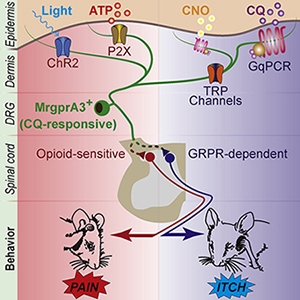 To understand which cellular events within MrgprA3 neurons might give rise to itch versus pain, the authors asked whether TRP channels played a role in both behaviors. Specifically, the temperature-sensitive TRP channels TRPA1, TRPV1, and TRPC3 have all been implicated as potential downstream effectors for MrgprA3-induced itch, though the level of expression of these receptors in MrgprA3 neurons has been debated (Wilson et al., 2011, Than et al., 2013, Xing et al., 2020).

When the researchers pretreated wild-type mice with a blocker of TRPA1, TRPV1, or TRPC3, they saw a reduction in the number of scratches directed to the nape of the neck in response to skin injection of chloroquine. In contrast, blocking TRP channels did not affect the frequency of pain behaviors spurred by optogenetic stimulation of MrgprA3 afferents in hindpaw skin.

Taken together with the results from the P2X3 experiment, these findings point to a possible cellular mechanism underlying the different behavioral outputs of MrgprA3 primary afferents: Metabotropic activation engages TRP channels by way of GPCR signaling to cause itch, while the direct activation of ionotropic channels causes pain.

“We show that primary afferents can encode at least two different types of information,” Sharif explained. “How is that information retained by a cell? How is itch versus pain information presented to the postsynaptic neuron?” he added, are the key questions moving forward.

As a first step toward answering those questions, the authors also asked whether MrgprA3 afferents engage different spinal pathways to give rise to itch versus pain. To find out, they manipulated two receptors known to differentially modulate itch versus pain: the gastrin-releasing peptide receptor (GRPR) and the mu-opioid receptor (MOR), respectively.

GRPR is thought to act as a gate for spinal itch transmission, but not pain. Therefore, the investigators asked whether GRPR blockade specifically suppressed itch evoked by MrgprA3 afferent activation. As expected, a GRPR blocker delivered to the spinal cord significantly decreased scratching in response to chloroquine injected into the nape of the neck. However, the same GRPR blocker had no effect on pain behaviors resulting from optogenetic stimulation of the hindpaw. Notably, a pain-relieving MOR agonist, DAMGO, suppressed those pain behaviors.

These results suggest that different spinal pathways are engaged depending on the mode of MrgprA3 afferent activation, and also reaffirm that behaviors caused by optogenetic stimulation are indeed pain behaviors.

Based on the new findings, is it time to put the labeled line theory to rest?

“In my opinion, it’s clear that coding of pain versus itch doesn’t only come from the type of afferent that is activated. It has to come from a combination of different afferent subtypes, the pattern of afferent activity, and the temporal input. Instead of trying to force new data to fit with previous theories, I think it’s time to move on to new ones,” said Ross.

“There could be an enriched labeled line theory,” Séguéla said. “MrgprA3 neurons definitely have the right components to induce itch – specific TRP channels, for example – so in this sense, there is a labeled line, but the line is able to transmit more than itch, and these neurons can also act as nociceptors.”

And, according to Hoon, existing coding theories don’t have to be pitted against one another. “A lot of people equate the idea of not believing in a labeled line with not believing in selectivity. But the two are not mutually exclusive, because they are separate ideas,” Hoon said.

As for cracking the code of pain and itch, Hoon explained that “until we have a fairly good grip on what’s happening in the periphery – the full complexity of inputs onto afferents from non-neuronal cells – it’s hard to solve what the coding inputs and outputs are. But that’s from the perspective of someone who works in the periphery,” he joked.

“The authors do a good job of raising important considerations for the field, as we are applying new techniques like optogenetics and chemogenetics to the issue of peripheral coding and more broadly, to information coding throughout the nervous system,” he said.

“We observed that chemogenetic and optogenetic manipulation of one type of sensory neuron can give rise to different outputs,” Séguéla said. “But the output of any type of neuron, peripheral or central, could be different depending on the mode of stimulation – on the way we interrogate the neuron. I think this opens the door for many investigations on how rich the repertoire of neuronal outputs might be.”

Tayler Sheahan, PhD, is a postdoctoral scholar at the University of Pittsburgh, US. Connect with her on Twitter @shea_tay