Does Dendritic Spine Plasticity Contribute to Pain? The Evidence Is Mushrooming 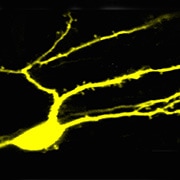 Dendritic spines – small protrusions from the dendrites of neurons – have been familiar to neuroscientists for more than a century, especially to those studying the neuronal mechanisms of learning and memory. But the contribution of these structures to neurological diseases is still poorly understood. How changes in dendritic spine structure may play a part in pain is even less well known. Now, by examining changes in the structure of dendritic spines in vivo – over time, before and after nerve injury, in the same neurons – a new study provides fresh insight into the role of dendritic spine dynamics in pain.

Researchers led by Andrew Tan, Yale University School of Medicine, New Haven, US, and VA Connecticut Healthcare System, West Haven, US, use two-photon imaging to visualize structural changes in superficial dorsal horn dendritic spines in mice. They find that, seven days after spared nerve injury, there was an increase in the number of mushroom-shaped spines, compared to three days after injury; spines with this shape are more established, stable structures that have been linked to excitation in nociceptive circuits. The spines were also longer and had larger heads, which are the bulb-like areas at the tips of the spines. The group also observed increased formation of new spines at seven days post-injury, compared to three days, when the spines were instead decreasing in number.

Together, the results build upon the investigators’ previous work linking alterations in dendritic spine structure to pain, and proves the value of two-photon imaging in such research efforts.

“Technically, it’s extremely impressive – a real tour de force – to have been able to image live animals and record the same cells on multiple occasions,” said Andrew Todd, a pain researcher who studies spinal cord pain and itch circuits at the University of Glasgow, UK. “To be able to do this at all is certainly a major feat.”

Still, Todd cautioned that several major questions remain, including which specific population of neurons the dendritic spine changes are occurring in, as well as whether or not the alterations truly underlie the symptoms of neuropathic pain.

The research appeared May 27 in the Journal of Neuroscience.

Bringing the study of dendritic spines “into the future”

Tan’s work on dendritic spines goes back about a decade, when he first started examining the link between these structures and pain. Previous work from his group identified dendritic spine alterations, similar to those seen in the current study, in superficial dorsal horn sensory neurons after spinal cord injury (Cao et al., 2017). But those earlier findings came from observations only in postmortem tissue.

“All of our previous work had been done using a very classic, old-school neuroscience technique,” agreed first author Curtis Benson, also of Yale, referring to the use of Golgi-staining of tissue samples. “But that really only gives you a snapshot of what we know to be a very dynamic process, at least from research in the brain. So we really wanted to see, for ourselves, the dynamic nature of spines in the spinal cord.”

So the investigators turned to two-photon imaging, which has been used in the brain, but had not been used before to visualize dendritic spines in the spinal cord or to picture changes over time, before and after injuries that researchers know can spur neuropathic pain. For this effort, they collaborated with co-study author Keith Fenrich, University of Alberta, Canada, who had previously developed a method whereby a glass window is surgically implanted over the surface of the spinal cord in mice, allowing for visualization of vascular and myelin tissue while the animals remain alive for weeks (Fenrich et al., 2012). The group optimized the technique for their new study, especially so that they could peer deeper into the spinal cord, where they could resolve single neurons and dendritic spines. 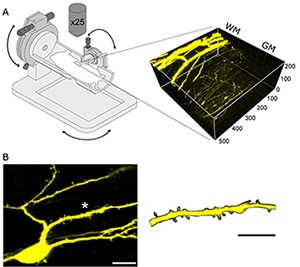 Dendritic spines over time: live and in action!

With their optimized imaging method ready to go, the researchers were set to examine possible changes in dendritic spine dynamics that might be associated with pain, using a spared nerve injury model in mice. Focusing on dorsal horn neurons in lamina II of the superficial dorsal horn, the team first confirmed that they could visualize dendritic spines in those neurons five days after the animals had received the window implant. Postmortem histology analysis would reveal that most of the cell bodies of imaged neurons resided in the inner region of lamina II.

Next, the group used the two-photon imaging in uninjured animals at one hour, three days, and seven days after the animals had recovered from surgery. The researchers were looking for changes over time in dendritic spines of the same neurons, particularly for alterations in spine length (defined as the distance from the base of the spine neck to the farthest distance on the spine head) as well as in spine head width (the maximal width of the dendritic spine head). The researchers saw more fluctuation in spine length and spine head width at three and seven days, compared to one hour. At seven days, they also observed an increase in the amount of fluctuation in the length of mushroom-shaped spines compared to one hour. Together, the findings told the team that the spines were more stable at the early stage of imaging.

“The first time we looked through the microscope and saw spines in a living animal was pretty exciting for us, for sure,” said Benson. “They’re stable over the course of hours, and it requires days for us to see changes.”

It was then time to see how nerve injury affected the spines. The researchers imaged the same dorsal horn neurons before and after spared nerve injury (injured animals exhibited the expected mechanical and thermal hypersensitivity, as well as tactile allodynia). They saw no changes in spine length or spine head width at three days after injury, compared to uninjured animals. However, at seven days after injury, they saw notable increases in spine length fluctuation and spine width fluctuation (when looking at both total spines and thin-shaped spines) but no differences in mushroom-shaped spines, which thus appeared more resilient to the effects of nerve injury. 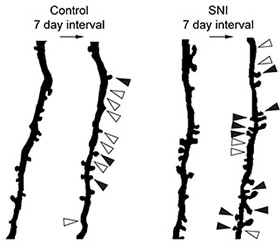 Putting all the results together, and consistent with the researchers’ earlier study of postmortem tissue, the data showed that early after injury, the thin-shaped spines were removed faster than they were later after injury. The later time point of seven days after injury featured increased gain and turnover of spines, especially the mushroom-shaped variety. In short, the findings indicate the presence of a temporal component to altered spine dynamic after nerve injury.

Are the dendritic spine changes truly reflective of an underlying mechanism?

With these new results in hand, the researchers say they feel more assured of the contribution of dendritic spine dynamics to pain.

“What we think is the really important part is that now that we’ve corroborated a lot of the postmortem data, we are more confident that dendritic spines are a morphological correlate for pain,” said Tan.

However, Todd cautioned that it’s difficult to know at this point if the dendritic spine changes are actually reflective of an underlying pain mechanism, since it’s unclear whether the area of the spinal cord examined in the study is directly involved in generating neuropathic pain symptoms.

“Was it genuinely a region receiving sensory inputs that underlie neuropathic symptoms, or is it just a denervated region in which there’s no intact input?” Todd asked. “You have to be very careful about being sure that the mechanism actually underlies the pain.” However, most of the difficulty, he added, lies in the imaging methodology available to researchers. “One of the problems with all of these imaging studies in the spinal cord is that there’s a very narrow window of dorsal horn that you can access.”

Another limitation, Todd said, is that it’s unclear in which particular cells the altered spine dynamics are occurring. “There isn’t strong evidence that these cells are excitatory. Even if they are excitatory, there are multiple different populations of excitatory interneurons that have different places in circuits,” according to Todd. “Knowing which population of cells this phenomenon occurs in, or whether it’s a general change affecting several different cell types, is absolutely going to be the next step” for research to take.

In short, Todd said, “the finding of the seven-day changes being significant, particularly the increase in mushroom spines – that’s certainly very impressive. Correlating that with the actual pain symptoms, both in terms of the time course and the somatotopy, let alone the neuronal population, is trickier to do.”

When asked if the dendritic spine changes are driving the pain, rather than only being associated with the pain, Tan said the former is likely the case, when one considers the role that dendritic spines play in transducing electrical activity, an increase of which is the hallmark of pain.

“It comes back to the idea that form follows function,” Tan added. “If the structure changes, its function must change, too,” referring to neurons.

If you know the structure, maybe you can fix it

The researchers view their two-photon imaging system as an approach to learn more not only about how neuropathic pain develops, but also as a potential bioassay for testing the effects of drugs on different types of pain.

“If we can find a method or a target to correct the structure,” Benson said, “we can correct the excitability or the function of the neurons, regardless of what conditions are setting the structure up. We see this imaging technique as broadly applicable to multiple disease states and pain conditions.”

The rationale for developing drugs to correct dendritic spine structure is solid, the researchers believe, considering that, for instance, their previous work with postmortem tissue showed that targeting an inhibitor to Rac1, a regulator of dendritic spine dynamics, reduced changes in the spines that occurred after spinal cord injury. Tan also said his group is looking at whether existing clinically available drugs could accomplish the same feat. He’s also examining gene therapy approaches that could correct dendritic spine abnormalities.

Finally, the researchers are also hoping to address this question: What is the molecular trigger of the changes in the dendritic spines?

“That’s a fascinating question that we’re trying to explore now using transgenic animals,” Tan said. “I think the trigger is inflammation. We know that a lot of pain has an inflammatory component. There’s an interplay between microglia and astrocytes, and the presynaptic and postsynaptic neuron, and we know that a lot of the changes involved in central sensitization in the spinal cord associated with neuropathic pain are maintained by astrocytes.

“This looks to be temporally dependent,” Tan added. “You have inflammation early – the trigger – and then over time, this inflammation leads to the locking-in of pain through the structural reorganization of dendritic spines. Now we’re trying to build a picture of this phenomenon using our in vivo imaging approach. We can look at how inflammation leads to neuronal restructuring that locks in neuropathic pain.”

In the end, the researchers hope their work will spur increasing recognition that to fully understand pain, one must go beyond the molecules and ion channels that contribute to it; neuronal structure also matters.

“We think the neurons themselves, as structures, are also important to study,” said Tan. “Dendritic spines change in response to a stimulus but, interestingly enough, they can also lead to changes in the stimulus, too. They both incorporate activity as well as change that activity through their structure. Maybe dendritic spines are both a cause and consequence of pain.”

Neil Andrews is a science journalist and the executive editor of PRF.