The rubber hand illusion is stronger in people with schizophrenia

Home / The rubber hand illusion is stronger in people with schizophrenia 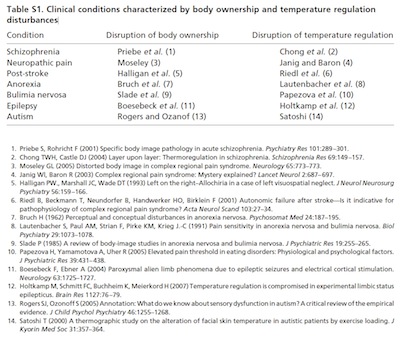 In our paper in PNAS a couple of years ago, in which we showed that the RHI is associated with a drop in skin temperature of the ‘replaced’ hand, we proposed the idea that the result is relevant to a range of psychiatric and neurological disorders (check out the table we put in as supplementary info:

Well, now there is some evidence to support that idea. A group from Nashville Tennessee has put down their guitars and investigated the rubber hand illusion in people with schizophrenia.  The used the usual method to induce the illusion – synchronous stroking of the real hand and the rubber imposter – the control condition was the usual control condition – asynchronous stroking of the real hand and the rubber imposter.  They measured self-reported vividness of the illusion, proprioceptive drift (the perceived location of your own hand, estimated with your eyes closed) and change in skin temperature on both hands.  They compared the schizophrenia group to a group of supposedly matched (although it is difficult to know how 21 controls can be matched to 24 patients – I suspect they mean 21 controls of similar age and gender distribution).

Here is what they found: (i) The usual – the illusion induces a drift and a drop in skin temperature on the real hand. Notably, these results were not as straightforward as one might predict – there was no proprioceptive drift for the controls and the drop in skin temperature was greater when the right hand was stimulated than when the left hand was stimulated. (ii) The effects were larger in patients than they were in controls. This supports previous findings using only self-report (iii) In the schizophrenic patients, the vividness of the illusion and change in skin temperature were related to measures of delusions.

One unexpected finding of their study was that of an out of body experience induced by the experimental protocol. They describe it at length and it is really quite intriguing – a good read. Rather than describe it again here, suffice to say that the illusion seemed to crack this individual’s entire sense of body ownership, not just that related to his arm. The experimental results and case study underpin the conclusion that schizophrenia is associated with a weaker and more flexible sense of body ownership.

The authors speculate on neural mechanisms and they focus on the usual suspect – the temperoparietal junction and the infraparietal lobe. These are the most frequent brain areas implicated in frank body disownership caused by damage – somatoparaphenia – and right temperoparietal seizure is associated with out of body experiences. They also raise the possibility of NMDA glutamate dysfunction in the mechanisms. That NMDA antagonists can mimic some of the symptoms of schizophrenia and are consistent with the development of schizophrenia seems consistent.  The vividness of the rubber hand illusion is augmented in schizophrenic participants if they take ketamine, which is an NMDA antagonist. Finally, ketamine is the surest way to induce an out of body illusion experimentally.

So, the paper itself is well worth a read – it is a fascinating story and some of the data are sufficiently different to published findings (including our own) to induce some speculation from the authors. Check it out here – it is freely available for download.