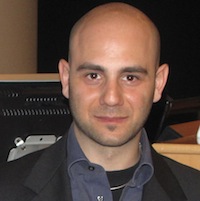 Imagine a cold winter day. Everything is covered by snow. You are getting ready to go out. Coat, scarf, wool cap, but on the table next to the main door there are your brand new gloves, one is blue the other one is red. How do we choose which glove corresponds to which hand? Most people automatically prepare, or imagine, moving one hand into the position of one glove. If the imagined movement actually “puts” the chosen hand into the correct glove and position, we are fine. Otherwise your children will have to look for the neighbors to tighten boots for them.

This imagined movement is what is known in experimental psychology as mental imagery. In particular, as it involves an imagined or simulated body movement, it is referred to as motor imagery. In the case of people required to judge the laterality of a visually presented body part, the recruited simulation is defined mental rotation. Such movement simulations reflect temporal and kinematic properties of the real movements and therefore mental rotation of hands is sensitive to multisensory and sensorimotor information from, for example, proprioception and posture.

Over the last decade there has been increasing work on the importance of similar multisensory mechanisms on body-ownership, i.e. the feeling or conscious experience that our body as well as body segments belong to us. Such an apparently obvious link between the body and the sense of ownership is not taken for granted, for example in some clinical conditions such as somatoparaphrenia. In order to investigate the mechanisms leading to a healthy as well as a impaired sense of ownership, a fascinating illusion that is easy to try on yourself with a friend is the rubber hand illusion. Using this method it is has been shown that seeing a fake hand positioned close to your body and being stroked simultaneously with your own (hidden) hand, determines a proprioceptive illusion leading to a bias in the perceived position of your hand (towards the fake hand) and to an illusory sense of ownership of the fake hand. Brain imaging studies have showed that hand-movement imagery (e.g. mental rotation) and illusory ownership for a fake hand (e.g. during the rubber hand illusion) are associated with activity in partially overlapping brain networks, including the premotor and the inferior parietal cortices. Despite the shared mechanisms and the common neural substrate, however, the potential influence of illusory hand ownership on hand movement imagery ability has not been investigated so far.

In a recent study (Ionta et al., 2012) we were able to show that illusory ownership of a fake hand due to the rubber hand illusion alters thinking about hands using hand movement imagery. In particular, we found that in the mental rotation of hands visually presented only in the view corresponding to the rubber hand’s one (palm-view), people reacted faster and more accurately as a function of the synchrony between the visual stroking applied to the rubber hand and the tactile stroking applied to the participants’ hand. Our results showed that during the baseline (no stroking) and the asynchronous visuo-tactile stroking condition, the mental rotation speed for palm-view hands was not affected by the orientation of the hand itself. However following the synchronous visuo-tactile stimulation, the response times for the mental rotation of palm-view hands was more dependent of the orientation, reflecting the biomechanical difficulty of assuming an awkward position and suggesting a stronger reliance on sensorimotor mechanisms.

Previous neuroimaging studies showed that increased activity in the premotor cortex is associated with both mental rotation (Munzert et al., 2009) and bodily illusions (Lenggenhager et al., 2011; Naito et al., 1999). Similarly, there is a correlation between the strength of activity in the inferior parietal cortex and both the spatial demand in mental rotation (Wolbers et al., 2003) and the rubber hand illusion (Ehrsson et al., 2005; Ehrsson et al., 2004). Finally, the direct and within-subject comparison between brain activity associated to the rubber hand illusion and mental imagery of hand movements, results in the activation of a common neural substrate centered on the premotor cortex (Evans and Blanke, 2012).

Our data suggest that the illusory hand ownership due to the rubber hand illusion facilitated the activation of sensorimotor representations, leading to a stronger reliance on biomechanical constraints. In addition our results confirmed that in the absence of synchronous visuo-tactile stimulation on a fake hand visible from the palm view, the mental rotation of palm-view hands is based on visual rather sensorimotor mechanisms. Accordingly, the absence of the orientation-dependent response times for the mental rotation of palm-view hands has been repeatedly reported in both healthy subjects (Wilson et al., 2004; Zacks and Michelon, 2005) and a large variety of clinical conditions (Coslett et al., 2010; Craje et al., 2010; Funk and Brugger, 2008).

The dissociation between two different mental processing of the same stimuli (palm-view hands), based on sensorimotor versus visual mechanisms is not surprising, e.g. taking into account the evidence reported also in motor impairments affecting motor but not visual imagery of the same stimulus (Steenbergen et al., 2007; Tomasino and Rumiati, 2004; Tomasino et al., 2003).

In conclusion we propose that the rubber hand illusion selectively facilitates the recruitment of sensorimotor mechanisms for the mental rotation of hands presented from a corresponding view. This evidence suggests that bottom-up visuo-tactile multisensory stimulation can have an impact on high-level cognitive processes. 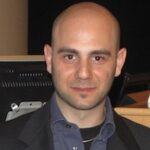 Silvio received the MSc in Experimental Psychology at the University of Rome “La Sapienza” (Italy) in collaboration with the Social and Cognitive Neuroscience Laboratory. For his PhD in Functional Neuroimaging he moved to the Institute of Advanced Bio-Medical Technologies at the Deptartment of Clinical Sciences and Bioimaging, University of Pescara-Chieti “G. D’Annunzio” (Italy). He spent a first post-doctoral position at the Laboratory of Cognitive Neuroscience at the Brain-Mind Institute, Ecole Polytechnique Fédérale de Lausanne (Switzerland) and is currently working at the Rehabilitation Engineering Laboratory, Swiss Federal Institute of Technology (ETHZ), Zurich, Switzerland.