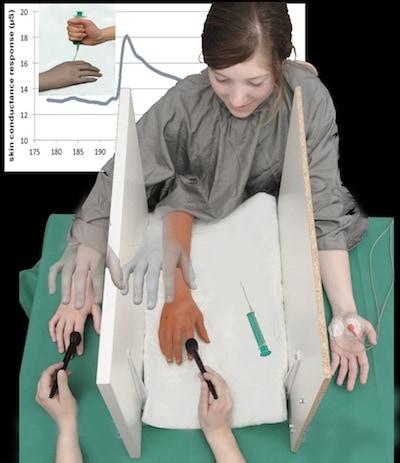 To the avid BiM reader the Rubber Hand Illusion (RHI) is probably well-known and old hat (for the not-so avid reader see below*). It is a popular paradigm because it can be used to investigate a) functionality of multisensory integration in corresponding brain areas and b) pre-existing mental representations of the body, i.e. body image [1].

We used the RHI to investigate how the brain of patients with Complex Regional Pain Syndrome (CRPS I) creates a representation of their body[2]. Why?  Because we know that patients suffering from CRPS have disrupted mental representations of the body and sensory deficits linked to maladaptive cortical plasticity in somatosensory regions. They feel that their affected hand does not belong to their body [3], they have a distorted spatial body representation [4] and sensory discrimination on the affected hand is reduced [5].  What we don’t know is how higher-order multisensory integration processes and areas connected to higher-order sensory functions work to create a representation of the body in CRPS.

We set out to investigate this by applying the RHI to CRPS patients. For control measures we also included patients with other types of hand pain and healthy participants in our study.

The results we received were completely unexpected: despite feelings of disownership towards the affected limb and despite (bilateral) centrally disrupted sensory processing, CRPS patients are able to perceive illusory ownership over a rubber hand – to the same extent as healthy participants and patients of the control group. What does this mean?? It means that higher-order sensory functions concerned with multisensory integration of body-relevant stimuli are unaffected in CRPS.  Or in other words: the intact illusion strength might be a functionality of premotor and posterior parietal areas that is similar to the functionality of these areas in healthy subjects. Clearly confirmatory imaging studies are required. Nevertheless, intact higher-order sensory integration in CRPS has also been observed elsewhere (e.g. here or here [5]) and thus corroborate our conclusion of preserved functionality of associated areas connected to multisensory integration in CRPS.

There is one more interesting finding that emerged in our study and it refers to the interaction between bottom-up multisensory integration and top-down influence of higher-order cognitive-affective body representations. In our sample we assessed the body image of patients with CRPS and patients with other types of hand pain using the German translation of Galer & Jensen’s Neglect-like questionnaire [3]. It turned out that those patients who strongly felt their affected limb was foreign and not belonging to their overall body anymore also experienced a much weaker illusion. Thus it appears that the distorted body image affected the (otherwise intact) multisensory integration of body-relevant stimuli [2].

This is an important discovery because it bears implications for the treatment of CRPS. It shows that we should not only go about training the brain in a bottom-up way to improve perceptual problems in CRPS but also include (psychotherapeutic) interventions that address the distorted body image which appears to affect sensory functions in a top-down manner. 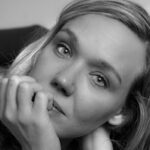 Annika’s PhD thesis, titled Body Schema and Body Image in Complex Regional Pain Syndrome, was a collaboration between the Department of Pain Management and the Institute of Cognitive Neuroscience, Biopsychology at Ruhr-University Bochum.

Annika’s research interests are in the neural correlates of the body schema and the interaction between body schema and body image in chronic pain – and in particular in Complex Regional Pain Syndrome.