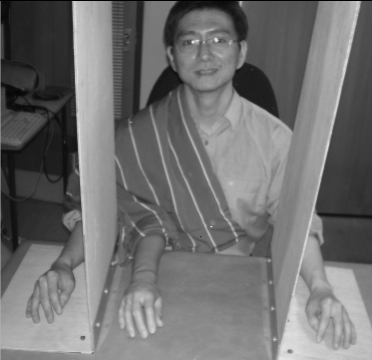 …we wanted to see if we could manipulate our sense of ownership of our bodies and reproduce a temperature disruption, that is exactly what we saw.

Our sense of our physical self comes from what we’re born with and the constant messages the brain receives from all parts of our bodies. We’ve now shown that this is a two-way street. The mind can also influence the body’s tissues. We have demonstrated that the mind can control a specific body part.

and here’s the science:

The sense of body ownership represents a fundamental aspect of our self-awareness, but is disrupted in many neurological, psychiatric, and psychological conditions that are also characterized by disruption of skin temperature regulation, sometimes in a single limb. We hypothesized that skin temperature in a specific limb could be disrupted by psychologically disrupting the sense of ownership of that limb. In six separate experiments, and by using an established protocol to induce the rubber hand illusion, we demonstrate that skin temperature of the real hand decreases when we take ownership of an artificial counterpart. The decrease in skin temperature is limb-specific: it does not occur in the unstimulated hand, nor in the ipsilateral foot. The effect is not evoked by tactile or visual input per se, nor by simultaneous tactile and visual input per se, nor by a shift in attention toward the experimental side or limb. In fact, taking ownership of an artificial hand slows tactile processing of information from the real hand, which is also observed in patients who demonstrate body disownership after stroke. These findings of psychologically induced limb-specific disruption of temperature regulation provide the first evidence that: taking ownership of an artificial body part has consequences for the real body part; that the awareness of our physical self and the physiological regulation of self are closely linked in a top-down manner; and that cognitive processes that disrupt the sense of body ownership may in turn disrupt temperature regulation in numerous states characterized by both.