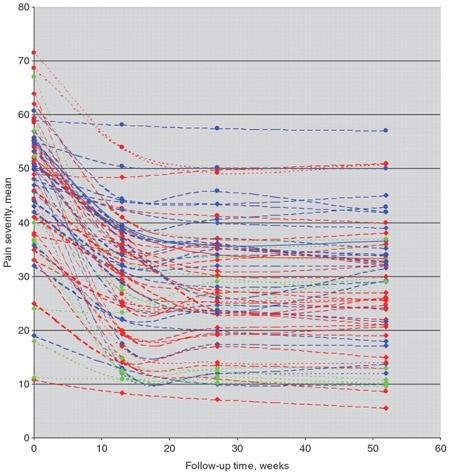 Every now and then I stumble across a paper that evokes the reaction “I wish I’d though of that”. Such a paper recently turned up in the journal Rheumatology by Majid Artus and his colleagues at Keele University. They performed a systematic review that aimed to assess not the effectiveness of interventions but instead the overall pattern of symptom development over time of back pain sufferers who take part in clinical trials and how it might vary between different types of intervention. They included 126 controlled trials of acute or chronic non-specific back pain.

This figure shows neatly what they found. It plots the responses from individual trials and what you see is a common pattern – people seem to get better and the effect size is not trivial. “Fabulous!” you might conclude, “treatment is good!“

Perhaps, but look closely. The blue lines are studies in which the treatment arm from the active treatment group was selected, the red where the comparator treatment group was selected and the green where usual care, waiting list controls or placebo group was selected. No glaring differences jump out. They then performed a meta-analysis subgrouping groups by the type of intervention received. This is always tricky as which treatments you lump into a group is open to debate. Nonetheless they found that variation in treatment response did not seem be explained by different types of treatment. The authors suggest that this may mean that factors that are not specific to the type of treatment given may account for the improvements seen. In other words Fun Boy Three and Bananarama (thanks to Melvin Oliver and James Young) may have been right when they sang “It ain’t what you do it’s the way that you do it, and that’s what gets results”

But perhaps there may be a bigger story in here. It is interesting that the placebo treatment/waiting list control/no treatment group didn’t differ from the treatment groups. In some ways it is a shame that the placebo group couldn’t be separated from the no-treatment and usual care groups in the analysis but as the authors note there simply weren’t enough no-treatment/waiting list groups to analyse reliably. Dr Artus kindly shared his data (always the sign of a real scientist) and it is interesting that the existing data from waiting list control and usual care arms does not hint at a smaller effect size.

If this finding is supported by future studies it might suggest that we can’t even claim victory through the non-specific effects of our interventions such as care, attention and placebo. People enrolled in trials for back pain may improve whatever you do. This is probably explained by the fact that patients enrol in a trial when their pain is at its worst which raises the mucky spectre of regression to the mean and the beautiful phenomenon of natural recovery.

We expect to see natural recovery play a big role in acute back pain trials but in this review 48% of the included data was from chronic back pain trials. There is a (seemingly plausible) argument I have often heard that in chronic conditions any improvement seen after a treatment (or in a trial) must be the result of the treatment since the patient has had their problem for so long:  “why would it get better now?”. It is common for the authors of trials that compare 2 treatments for back pain and find no difference to point to the fact that both groups improved from baseline as evidence that both treatments are equally (and meaningfully) efficacious. If the results of this review are maintained with future data then this is a genuinely shaky position (unless a no-treatment group is included in the trial for a direct comparison) and what we may well be observing is simply a statistical phenomenon.

In that case the song lyrics might go something like “It ain’t what you do and it ain’t that you do it”. And that’s a bad result.