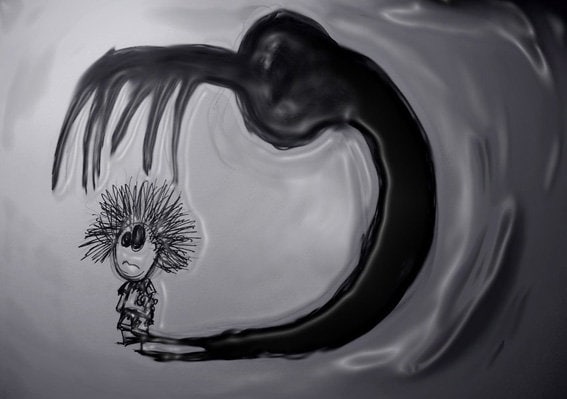 Genesis: To cut a very long story short, Smudj was born from a very dark period in my life. So dark that not a pin prick of light could be seen. I was on the knife edge of suicidal, wanting to be sliced into oblivion.

Close to a year before Smudj smeared its way on my page, my body had developed an autoimmune syndrome called Fibromyalgia. It fell upon me over a two week period. One day I was a healthy 30 year old, the next day my body was being torn apart by pain so severe and barbaric that no words have the courage to encapsulate the true horror of it. 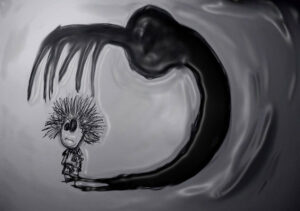 The pain was uncompromising, merciless and relentless. It was primordial, raw and naked. Never had I felt this depth of physical pain before. It sliced through my neck, shoulders, back legs, arms. Everywhere. I could not walk for 4 months. I could not dress myself. I could not hold a book or even a pencil. My mother had to spoon feed me because it was too painful to hold eating utensils.

My central nervous system was so over active that the slightest touch would send electrical signals screaming throughout my body. I could only bear to have a shower once a week: each droplet of water was akin to a needle piercing my skin. There was no rest anywhere, at anytime. Due to the pain I could not sleep more than a couple of hours a night. Without sleep the body cannot dream and to compensate the brain will dream while one is awake. My brain was drenched in images that tried to make sense of a body that had become a torture chamber. While awake I could see termites burrowing into my skin and eating my muscles. I knew I was hallucinating, but it did not stop me from surrounding my bed with crackers and frozen chops in the hope that the “termites” would eat these offerings instead of me. 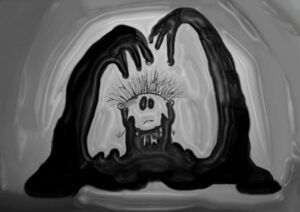 For three years this severe pain went on, but by the end of the first year, all I could think about was escaping the pain. I lost my career, my relationship and the majority of my friends abandoned me: even my beloved dog had to be put down because of cancer. No one in my family could stand being in the room with me for long periods because they felt too impotent to do anything. Time evaporated not into weeks, or days, or hours, or minutes. I was only existing from one eternal moment to the next. My body felt as if it was being mutilated by an invisible madman and all I could do was lie in bed trying not to move for fear that my body would be jolted with burning, electric shocks: nerve pain was rampaging through every fibre of self. No one in the medical profession knew what was wrong with me and no one could stop what was happening. I came to intimately know there are worse things then death and I was being hollowed out by it physically, mentally and spiritually. In order to leech these toxic thoughts coursing through me, I instinctively began to draw them out. 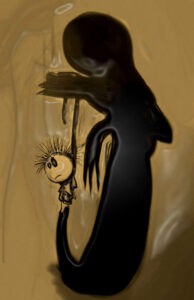 I was being smudged out of the world. My will to live blurred. Reality as I knew it disappeared and it would never be the same again. And in this crack of knowing, the dark, inky shadow of pain and depression began to swallow me whole.

I would like to say part of my recovery included a montage of me in slow motion with inspirational music overlayed on my images. But, in reality, it was (is) slow, frustrating, painful, and at times, just plain scary. It was (is) day in, day out of physio, stretching, massages, initiated by never ending cycles of pain and sleeplessness. I researched, trialed and screwed up different techniques and dietary frameworks until I got it right for my body. It is physically, psychologically, socially and financially draining.

People with chronic pain do not just go through one stage of grief, we go through multiple deaths coming, without reprieve, from all directions, as relationships with dreams, people, self and the world around us change and explode. The person I knew as “me” was altered, bucked from her self controlled trajectory in both minute and monumental ways. My psychology contracted, stagnated and then started to expand, metamorphosing into another of which I am still trying to understand. I had undergone a psychic death and continue a psychic rebirth, and, as with all births, the labor pains are hard and arduous.

To those who are dealing with chronic pain, I know you are struggling. I know at times you feel hopeless. I know you feel deserted and betrayed by body, the medical community, people you know and circumstance in general. Like you, I have been in the darkest and most painful of places, both physically and psychological. I was told that there was no hope, no cure, to just get use to this being your inverted life, and for awhile, I excepted their words as my reality until my own voice started to internally object and remind me of what I was capable of, of what I had already achieved. Very angrily it started saying:

Get up. Get researching. Get moving. Get asking questions. Stop accepting an outcome by people who have no freaking clue what they are talking about and who have not the freaking idea of who you are. 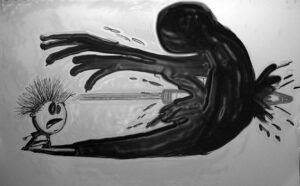 I have improved radically since the first few years of fibro. I can walk, dress, feed myself, I can hold a book, wield a pencil, put my thoughts on paper and clothe them in ink and colour. My goal of becoming a renowned cartoonist still spins with fever in my veins. I have wrestled my legs back and for the most part look “healthy”, but I still deal with the sensation of burning, numbing, aching pain, but nothing in comparison to the hell hole I endured. I have crawled, dragged, screamed and raged my self into Life again, and although I am still wanting for further healing, I no longer see a tunnel without end.

There is Light. There is Belief.  And Hope, that most fundamental strength of all human emotions, stands up anew, shakes off the cobwebs and walks through my world once more.

Rainer Galea is the cartoonist for Fluid Ink. Please check the site out and join to see more of Rainer’s cartoons that take a unique view on the human psyche and support human right issues. Cartoons are available to organisations that assist in human rights issues and educational programs. Please contact Rainer for further information.