Graded motor imagery, one shark and two men on a mission

Home / Graded motor imagery, one shark and two men on a mission 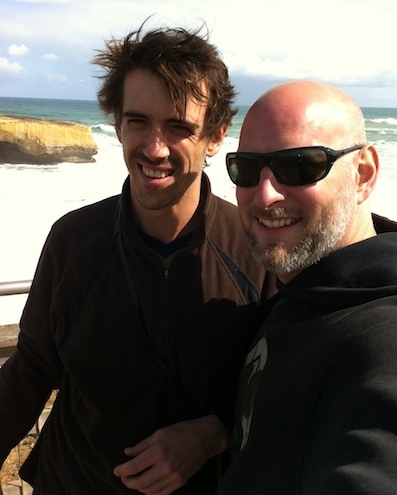 We recently got an email from the guys at Neuro Orthopaedic Institute, or NOI as they are more commonly known.  Now, none of us at BiM are part of NOI but we like the stuff they do and thought that this latest venture was worth giving a shout out for. The feedback we got from people who attended has been great.  This is what they did….

Tom Giles and Tim Beames, on the road

Blogging about Graded Motor Imagery (GMI) on Lorimer’s website, who would have thunk it! The concept of GMI has moved well beyond the embryo and there’s no hiding the tummy bulge now. It’s been the NOI TnT Tour Down Under, merging the pinnacle of Australian tourism and clinical neuroscience around the country in 20 days with a course in Adelaide, Melbourne, Sydney, Brisbane and Darwin.

I’m Tom and am the official ‘Recognise’ tech head. Being a roadie has given me a glance at who gets into this stuff, and it’s cool stuff. There was somebody on the Adelaide course whose leg went blue when she stuck it behind the mirror in a practical session and others who felt pain or danger in the middle of some guided motor imagery.  Playing with mirrors, thinking (or not) about moving are potent things. It’s all about the radar – how strong it is and where you can move in under the pain fence to break out, using problem solving to be as sneaky as possible.

But can you be an official GMI practitioner? I don’t think so. It’s a constantly developing umbrella concept encompassing the neuromatrix paradigm, mindfulness, problem solving and most importantly is an individually tailored part of treating pain. Over to the rockstar GMI instructor Timmy Beames from London…

I found my way down under off the back of England’s successful Ashes victory in January – either that or the need for the Aussies to cement techniques they’re using with some of the most difficult to treat pain conditions?!

It is interesting as the instructor that so many people want to share their stories of patients that they are currently treating using the principles that underpin the GMI process despite complex presentations! I think it is time that we see beyond just managing a pain problem and consider the massive potential everyone has to change for the better.

For those who haven’t a clue what Graded Motor Imagery is, it is a therapeutic process that involves 3 different treatment components used in a sequential manner. They include: implicit motor imagery (i.e. the ability to identify left from right body parts or left/right trunk rotation) followed by explicit motor imagery (the imagining of a body part moving) and then mirror therapy (tricking the brain using mirrors). What Lorimer (Moseley 2004, 2005, 2006) has found is that this approach, when tailored appropriately for the individual, is successful in treating complex regional pain syndrome 1, phantom limb pain and pain from brachial plexus avulsion injuries. Anecdotally GMI as a whole or as separate components is successful in a number of many other pain and movement disorders.

The thoughts (I think?) about what happens are that it gives a graded activation of different neuronal populations and cortical networks. Reducing the threat of, e.g. a movement, means that the activation of these networks no longer creates an excessive pain response. By doing this repeatedly in many varied contexts it aims to give back the flexibility and creativity that the brain desires in order to promote health. Time to head to Darwin, watch out crocs!

p.s. the shark was released after landing it with a towel

Tom Giles works at the Neuro Orthopaedic Institute in Adelaide, Australia and has been involved in developing the new Recognise programme to use for implicit and explicit motor imagery. As a non-clinician he brings a fresh and lively opinion to the development of these techniques using innate knowledge nurtured by his love of fishing, surfing and surviving off the land. Clearly he did not write this bio.

Tim Beames is a physiotherapist who works for Tryptych in London and as a principal instructor for NOI in the UK. He got his Masters in Pain:Science and Society at Kings College  London under the superb tutelage of Dr Mick Thacker and was instrumental in removing the hook from the shark’s mouth.