Does charity start at homeopathy?

Home / Does charity start at homeopathy? 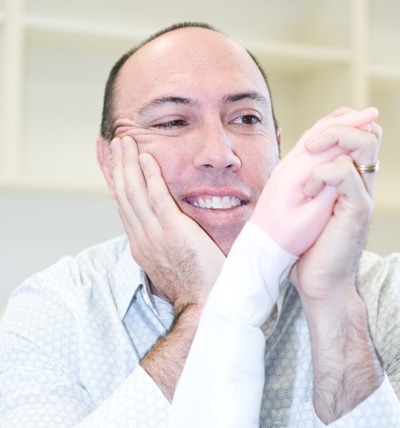 Well it was a bit predictable I guess, but the Australian National Health & Medical Research Council, a highly respected and independent body from almost anyone’s viewpoint, has released the findings of its mammoth investigation into the evidence supporting homeopathy. And the evidence is not good – there was no reliable evidence (i.e. from randomised controlled trials) from research in humans that it was effective for treating health conditions. That in itself may not seem altogether damning – a systematic review of the literature published in BMJ concluded that there is no evidence that opening a parachute while skydiving is effective for improving health outcomes either. That is – one might offer the ‘lack of evidence of effect does not constitute evidence of lack of effect’ response to this. But if this is you, don’t jump in just yet because the report itself goes on to clearly identify those health conditions to which this statement might apply (although clearly they don’t list all of them – that would be a list of all the health conditions that exist – instead they list those for which there was some investigation or data submitted in the review stage (see below). One way of summarising their conclusions might be to say: 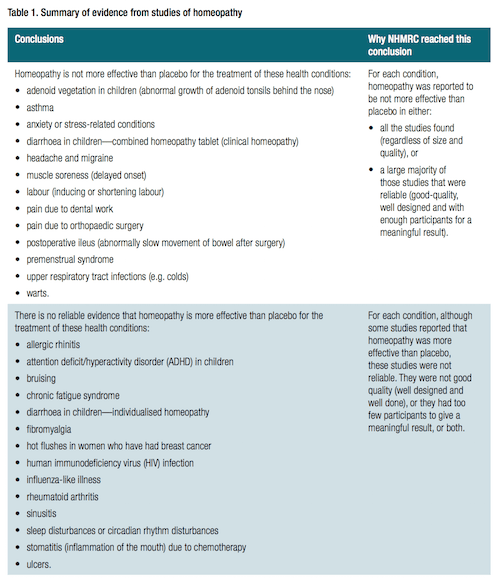 Another argument that might be offered is that this study was performed by a bunch of medically trained doctors, with their hands in the pockets of the pharma’s and their interests well and truly vested. Well you might be right on the first one – 2/7 of the working committee are medically trained – one is a GP and Professor of Evidence Based Practice and the other is a Rheumatologist and former board member at the Australian Centre for Complementary Medicine Education and Research. Also on the committee were a very accomplished Neuroscientist, a Consumer advocate, a pharmacist, a medical scientist and the Australian Government Chief Medical Officer. When such an important body as the NHMRC gathers a committee for a job like this, the potential candidates have to declare everything and anything, so the pharma’s would have no influence over the members. Other vested interests? I am sure there are some – I am on the record of saying that we can’t remove bias from what we do so we should do everything to declare its possible sources, which is what these guys have done.
A final argument against the findings is that the process locks out the real world practicing homeopathic practitioners – those who know what they do works and think the randomised controlled trial is too rigid, blunt or rigged to show the effect. Well this argument is a bit lame too – here is the full process of the review: 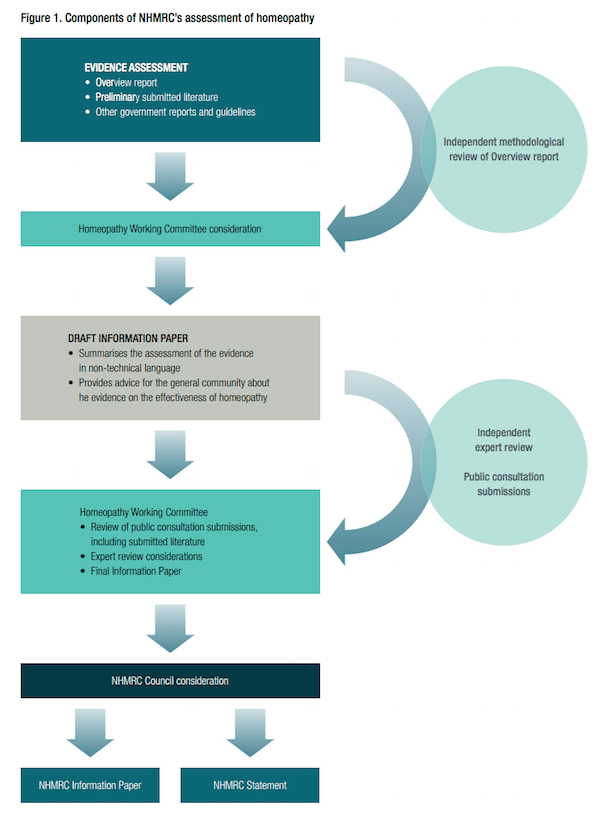 You will note here that although the process starts with a whiz bang tight-as literature review, there were two opportunities for Homeopathic interest groups and members of the public to submit there own information and review the draft versions of the report. Submissions included those from the Australian Homeopathic Association and the Australian Medical Fellowship of Homeopathy.
So, my interpretation of this report is that homeopathy might work, but it almost certainly works via the same things that a treatment that you might think is homeopathy works. We know relatively little about these mechanisms so we lump them all into the (in my view problematic) category of placebo effects. I once wrote that the placebo idea is a bit daft and I stand by that insofar as it describes the things we haven’t untangled yet. But, as Dan Moerman has discussed elegantly in his lovely book on this sort of stuff these effects we cast off as ‘merely placebo’ can be thought of as meaning responses or meaning effects. Clearly, homeopathic practice can tap into that. So why don’t we show a bit of charity and suggest people use it – it can’t be doing harm right?  Well here is the rub – the NHMRC is sufficiently concerned about the use of homeopathy as a first line for some health issues to include this in their official statement (and it was this bit that got the tongues wagging):
“Homeopathy should not be used to treat health conditions that are chronic, serious, or could become serious. People who choose homeopathy may put their health at risk if they reject or delay treatments for which there is good evidence for safety and effectiveness.”
Pretty clear advice that.

He has published 160 papers, four books and numerous book chapters. He has given over 120 keynote or invited presentations at interdisciplinary meetings in 26 countries and has provided professional education in pain sciences to over 7000 medical and health practitioners. He consults to governmental and industry bodies in Europe and North America on pain-related issues. He was awarded the inaugural Ulf Lindblom Award for the outstanding mid-career clinical scientist working in a pain-related field by the International Association for the Study of Pain, was shortlisted for the 2011 and 2012 Australian Science Minister’s Prize for Life Sciences, and won the 2013 Marshall & Warren Award from the NHMRC, for the Best Innovative and Potentially Transformative Project.

NHMRC Statement on Homeopathy and NHMRC Information Paper – Evidence on the effectiveness of homeopathy for treating health conditions.