More on the complex interaction between us and our environment….

Home / More on the complex interaction between us and our environment…. 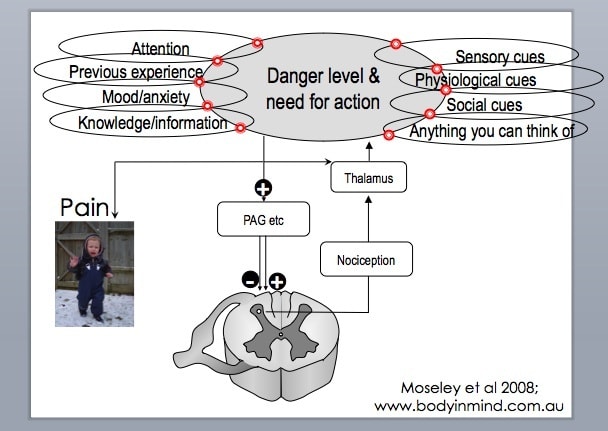 There is a very clever Belgian psychologist called Stefaan Van Damme.  He has done some excellent work on attentional mechanisms involved in pain.  More importantly, however, is that he is a jolly nice fellow.  Anyway, he came to Oxford and did a great little experiment (actually, we did a couple but the other one is not ready for the real world just yet because we can’t work out what it really means!) using a recognised approach to investigating how the brain allocates priority to different areas of space.  We have done some studies using the same approach, called temporal order judgments, in people with complex regional pain syndrome.  This is how it works – two identical stimuli are delivered to the same body part on each side of the body – usually the hands. They are delivered a slightly different times and the participant judges which stimuli they think occurred first.  By doing lots of lots of these, we can get an idea of how the brain is prioritising information from each body part.  Well, Stefaan’s experiment looked at what happened to the brain’s prioritisation if a photograph was displayed next to one hand or the other.  Not surprisingly, any type of photograph had an effect – the brain is ‘attracted’ to that side. However, the cool thing was that when the photograph implied that there was something dangerous to the hand – eg a picture of a knife, then this prioritisation effect was bigger on tactile stimuli than other photographs.  What’s more, if the picture implied a full-body threat – eg a picture of bus exploding, there was an effect for auditory stimuli, but not tactile stimuli. How cool is that?!? The prioritisation is specific to the modality – there is not much point allocating priority to tactile stimuli if your whole body will be damaged but there is if it is the hand in question that might be damaged.  Cool stuff Stefaan – well done. Here is the abstract…..

Threatening stimuli are thought to bias spatial attention toward the location from which the threat is presented. Although this effect is well-established in the visual domain, little is known regarding whether tactile attention is similarly affected by threatening pictures. We hypothesised that tactile attention might be more affected by cues implying physical threat to a person’s bodily tissues than by cues implying general threat. In the present study, participants made temporal order judgments (TOJs) concerning which of a pair of tactile (or auditory) stimuli, one presented to either hand, at a range of inter-stimulus intervals, had been presented first. A picture (showing physical threat, general threat, or no threat) was presented in front of one or the other hand shortly before the tactile stimuli. The results revealed that tactile attention was biased toward the side on which the picture was presented, and that this effect was significantly larger for physical threat pictures than for general threat or neutral pictures. By contrast, the bias in auditory attention toward the side of the picture was significantly larger for general threat pictures than for physical threat pictures or neutral pictures. These findings therefore demonstrate a modality-specific effect of physically threatening cues on the processing of tactile stimuli, and of generally threatening cues on auditory information processing. These results demonstrate that the processing of tactile information from the body part closest to the threatening stimulus is prioritized over tactile information from elsewhere on the body.