Around this time last year, our research at The University of Nottingham unexpectedly stumbled into the media spotlight: “Mind tricks may help arthritic pain; Illusions can halve the pain of osteoarthritis” the headlines read. See the original BBC news article complete with video here.

They were referring to our MIRAGE multisensory illusions box, which can create a powerful illusion that the hand or fingers are being stretched or shrunk. We do this by pulling or pushing on the fingers or hand while a live video image of the hand is stretched or shrunk at the same time. A chance discovery appeared to show that these illusions can reduce the experience of pain in osteoarthritis. Further investigation found that in a sample of 20 OA patients, 85% reported a reduction in pain in their hands (Preston and Newport, 2011). But what is going on here? Perhaps the findings support the idea that, like Chronic Regional Pain Syndrome and Phantom Limb Pain, at least some pain can have its origins in the cortical representation of the body. We can speculate to our heart’s content (and we frequently do), but the truth is we don’t really know so it’s my job to find out what on earth is going on.

The first step was to check that this wasn’t a chance result by running a more rigidly controlled experiment in a bigger sample. I have to say, I had my doubts (I still took the job though, you’ll notice). The original results seemed just a little bit too good to be true, but as I have worked my way through this project and seen the dramatic reactions from many of the participants, there is little doubt left in my mind that there is something wonderful and endlessly fascinating going on here.

The best are the cynical ones. The ones who take one look at MIRAGE and then look back at me with an air of incredulity. “But my pain is real pain”, they protest. “You’re not going to fix it with a computer!” These are my favourite. We go through the motions. They put their hands in the MIRAGE. They look at their hands, they look at me, they look back at their hands. They are poised, ready, just waiting to say “I told you so” and flounce out of the lab – or at least as much as their painful knees will allow. But then I perform the illusion. There’s a moment of baffled silence, and then before I can even ask for a pain rating come the exclamations. Despite their excitement, the participants seem at a loss as to exactly how to describe the feeling they are experiencing. Some have described it as being like a yawn or a morning stretch for their hand, some say that the painful part now feels numb, one described their hand as feeling “oddly warm”, and others seem unable to elaborate any further than “it just feels nice”.

Of course, I wasn’t the only sceptical one: the first thing anyone vaguely clinical asks is, “But isn’t this just a placebo effect?” The original discovery was made completely outside any clinical or treatment setting and so we don’t think it can have been a placebo or contextual effect, but showing that this is not the case is vitally important for novel findings such as ours. For this reason, we implemented a number of control conditions, including some smashing new illusions, such as pulling the hand wider, making the hand unexpectedly disappear and pulling the finger/hand at a slightly different time to seeing the image of the hand get longer. This last one is crucial because the sensory input is the same (you feel a pull and see a stretch), but the illusion that the hand is changing shape is absent because of the lack of integration between seeing the stretch and feeling the pull.

Interestingly, despite our assumption that the pain relief would only last for the duration of the illusion, at least four patients have spontaneously commented that their hand feels much lighter and less painful as they were leaving the room after the experimental session, with one reporting that the pain had still not come back 10 weeks later! The best reaction I have seen was from a participant who walked using a stick and had told me early on in the session that he found it very difficult to grip it properly because his fingers were so stiff and painful. As I handed him his walking stick on his way out, he remarked that he could now grip his stick just fine and it didn’t hurt anymore. As I watched him striding confidently off into the car park, he turned back and said “I better not tell my daughter, or she’ll have me doing the washing up!”

There is still a long way to go before we can fully understand the precise brain mechanisms involved in this seemingly bizarre discovery. But it is moments like these that makes all the cancelled appointments, endless cups of tea, and regular temper tantrums directed at that shambles of a taxi firm suddenly seem worthwhile.

You can read more about MIRAGE and our research at our Mirage Multisensory Illusions Blogspot. 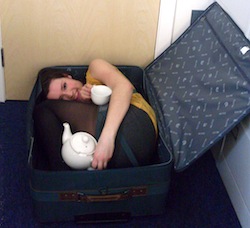 Helen has spent the last 8 months working as primary researcher on the arthritis trials. She is currently studying for an MSc in Cognitive Neuroscience and Neuroimaging at The University of Nottingham, and will be embarking on her PhD from September.

She likes sports, pub gardens, cheese, and most of all she likes a nice cup of tea! Unfortunately, she has just found out that the funding hasn’t come through for her trip to visit the Body In Mind group in Australia, which is truly devastating news. She has spent the last 24 hours trying to work out the most logistical way to fit herself and all of her worldly possessions into a suitcase in a desperate bid for the southern hemisphere.