A Reflection on the Mirror Box

Home / A Reflection on the Mirror Box 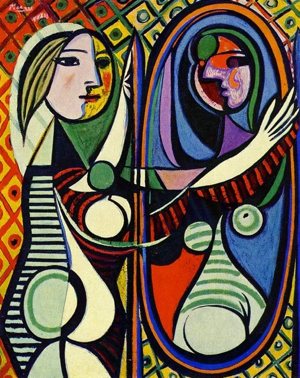 I met a fellow called Max. He was impressive with his command of the facts.  He does some cool studies.  He’s not one of the Luddies.  And certainly not one of the hacks.  That is what happens when one is a bit too low on sleep.  Which I am. But Max is not. Max works in beautiful Oxford and has done some excellent work looking at the use of mirrors in kids with spastic hemiparetic cerebral palsy.  This is a newish application of the mirror stuff and I reckon it is of great potential benefit. The thing I like about Max’s work, however, is the rigour with which he goes about answering a question, rather than trying to prove his theory is right. Here, he gives an excellent account of what he is up to:

In Pablo Picasso’s ‘girl before a mirror’, an impression is depicted of a beautiful and sunny girl looking at herself in a mirror. However, her reflection is not a thing of beauty but an image of a dark and hideous woman. The composition of the painting makes us question if we are looking at the girl’s perception of her own appearance or that the mirror reflection gives us an insight to the girl’s true character. The consideration is relevant because it influences our feelings towards the girl. For instance, do we need to feel compassion towards the girl because she feels ugly and has a low self-esteem of her appearance? Or do we need to be wary of the woman, because she is deceitful and does not show her true colours. This painting is an example of how perception can change complex processes such as feelings. More importantly from a human movement perspective, if perception can change complex processes as cognitive behaviour, can it change human movement?

There have been many interesting papers demonstrating how perception can change movement, none more so than the experiments by Franz Mechsner and colleagues in Nature. In their article from 2001 they presented findings revealing that highly complex, movements can be easily performed with only simple visual feedback. The authors argued that during in-phase finger tapping there is a spatial perceptual tendency for symmetrical bimanual coordination rather than co-activity of homologous muscles. These results raise the question as to whether manipulation of visual information can influence the movement of people with motor impairments.

Ramachandran et al. (1995) was, to my knowledge, the first to publish anecdotal evidence describing a visual illusion from a mirror reflection to manipulate action and perception in people with an asymmetry between body sides. Ramachandran and co-workers’ research focused on individuals with phantom limb pain following upper limb amputation. They placed a mirror in front of the participant along the mid axis of their trunk and asked the participant to position their non-affected arm on the reflective side of the mirror and their arm with phantom pain on the non-reflective side. The reflection of the non-affected arm becomes a superimposition on the affected arm, resulting in an illusory visual perception of a zero lag, symmetric movement between the two non-affected limbs. The authors reported that after a course of ‘mirror box’ therapy, painful spasms in the phantom limb were shorter and less severe when they occurred.

In later case studies, people with spastic hemiparesis after surviving a stroke were prescribed a course of ‘mirror box’ therapy (Stevens & Stoykov, 2004, 2003; Altschuler et al., 1999). A mentionable study was by Eric Altschuler and colleagues who presented some preliminary evidence for substantial improvements in the movement of the affected arm after four weeks therapy. The implication seems to be that, with the manipulation of visual feedback, painful sensations and movement difficulties could be overcome in adults with phantom pain following an amputation and hemiparesis following a stroke (Stevens & Stoykov, 2004, 2003; Altschuler et al., 1999; Ramachandran et al.,1995).

It would be a little excessive to summarise in this blog all the research that has been conducted on the ‘mirror box’. I therefore point the interested reader to an extensive review of the research and the development of ‘mirror box’ therapy in various populations published last year in the journal Brain (Ramachandran & Altschuler, 2009). However, I would like to highlight the research that investigated the effect of manipulating visual feedback in people with type 1 complex regional pain syndrome and found that incorporating ‘mirror box’ therapy as part of a pain management program reduced pain, swelling and functional disability (Moseley 2006; 2004; McCabe et al., 2003;). I personally think that this disorder is fascinating and it never stops to amaze me, particularly because it demonstrates quite clearly the existence of a complex interaction between the body and the brain.

Since 2006, my own research aims to gain insight into the contribution of visual information towards bimanual coordination in children with spastic hemiparetic cerebral palsy (SHCP). My methodology involved manipulating visual information during in-phase interlimb coupling and measuring movement and muscle activity. The availability of visual information was manipulated by placing a glass screen, opaque screen or a mirror (‘mirror box’) between the arms. Using this arrangement, visual information was available from both arms (glass condition), from one arm only (opaque screen condition), or from one arm and its mirror reflection (‘mirror box’ condition). Movement variability in children with SHCP was significantly greater in the screen condition than it was in the glass or mirror conditions; bimanual coordination in the mirror condition did not differ from the glass condition. However, during bilateral symmetric circular arm movements, mirror visual feedback induced lower neuromuscular intensities in the shoulder muscles of the less impaired arm than the other visual conditions did. In addition, the mirror lead to shorter relative durations of eccentric and concentric activity in the elbow muscles of the more impaired arm. These findings indicated that removing actual visual information of the more impaired arm and replacing it with a mirror reflection of the less impaired arm seemed to improve the motor control in children with SHCP during interlimb coupling compared to the other conditions without inducing negative effects on the performance of the movement (Feltham et al., in press, 2010).

Over the last 30 years different research groups found that the ‘mirror box’ has an effect on the movement of people with various neurological disorders. I fully believe that the ‘mirror box’ does something, because one only has to place their arms either side of a mirror from a sliding wardrobe door, for example, and move your arms incongruently to feel a funny sensation when looking at the reflection. So what are the underlying mechanisms that might explain the results? Well to be frank, we do not really know. I have postulated in a paper to be published in the journal Research in Developmental Disorders that there might be an increase in ipsilateral motor cortex excitability. Alternatively, but perhaps not mutually exclusive, the congruence between afferent (visual) feedback and the internal copy of the motor commands might explain the results for improved motor control in patients with an asymmetry between body sides. Future studies are required to not only investigate the underlying mechanisms of the ‘mirror box’ but also to investigate if prolonged exposure to mirror visual feedback still has a similar beneficial effect on motor control to acute exposures or that the effect extinguishes over time. These studies will be imperative if ‘mirror box’ therapy is to be fully understood and implemented effectively into clinical practice.

Max Feltham received a MSc. (2005) degree in Human Movement Science, with a major in Ergonomics from the VU University Amsterdam, The Netherlands and went on to complete his Ph.D. (2009) in Neural and Visual Control of Human Movement from the Manchester Metropolitan University, United Kingdom working at the Institute for Biomedical Research into Human Movement and Health. His research interests include the measurement of electromyography and kinematics to investigate the influence of visual information on motor behaviour in children with and without spastic hemiparetic cerebral palsy.  Since October 2009 he has been working as a postdoctoral researcher with the Movement Science Group at Oxford Brookes University. His work includes investigating the effect of exercise on heart rate in people with multiple sclerosis and the effect of long-term ‘mirror box’ training on motor cortex excitability in typically developed adults. He is, as you can see, a Dutchman living in England, so he has to pretend to like and watch and play cricket and football, which he claims he does. When he said he is planning his next scuba diving or skiing holiday, he had a much more authentic tone.  Clearly he did not write this bio.