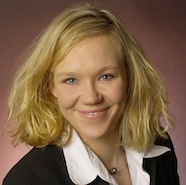 Imagine being offered one half of a Snickers Bar that on first glance was cut into two equal halves. Unless a machine bisected it, the right half would still be just a tiny bit larger. Why is that? Roughly said, the brain’s hemispheres are responsible for different functions. The right hemisphere is specialized in spatial abilities. When asked to bisect a line, humans tend to bisect it more to the left of its veridical centre, a phenomenon that is presumed to result from the right-hemispheric dominance in spatial tasks [1,2].

To examine this, we asked patients with CRPS on the hand, patients with pain of other origin than CRPS on the hand and healthy subjects to visually position their body midline. The task was carried out in the light and in the dark so that in the dark, participants would have to rely on their body schema when estimating their body midline. We found that in the dark, CRPS patients positioned their body midline significantly farther away from the objective body midline. And although all other participants positioned their bodymidline slightly towards the left from the veridical centre as well (remember Pseudoneglect), the amount of leftward deviation was largest in CRPS patients. This told us 2 things: a) only CRPS patients are impaired to encode the position of objects in relation to their body midline and b) it appears that not chronic pain per se but rather the CRPS-associated CNS changes in regions responsible for the body schema underlie this distorted visuo-spatial perception. Thus, the CRPS-asscoiated CNS changes that are involved in the distortion of the body schema also underlie the CRPS-specific distortion of visuo-spatial perception. Moreover, in CRPS these CNS changes appear to cause an accentuation of the leftwards bias (Pseudoneglect) that is presumed to result from the right-hemispheric dominance in spatial tasks [5]. Future research should focus on the close relation between the body schema and visuo-spatial perception in CRPS. 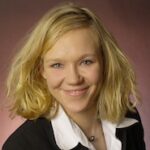 Annika did her Masters of Psychology at Nijmegen University in the Netherlands. Her PhD project was a collaboration between the Department of Pain Management and the Institute of Cognitive Neuroscience, Biopsychology at Ruhr-University Bochum.  Annika’s research interests are in the neural correlates of the body schema & the interaction between body schema and body image in chronic pain.