Presence Through the Eyes of a Child

Home / Presence Through the Eyes of a Child

Using a head-mounted display and body tracking suit, entering into a virtual reality, you can experience yourself as a child of about 4 years old.  You look into a mirror, or directly down towards your own body, but you see the child body instead.  The brain appears to be remarkably flexible in quickly accepting the proposition that your body is different – especially when you move your body the virtual body is seen to be moving the same as you feel yourself to be moving.  The virtual body has substituted your real body.

Alternatively you can be embodied in a virtual body of the same size as the child one, except that this is a shrunken down adult body. Otherwise everything is the same.  In both conditions people tended to have a strong illusion that the virtual body was their body.

The question we set out to answer with this arrangement is whether embodiment in the two different types of bodies would lead to differences in perception and also attitudes.  You remember as a child that things seemed to be enormous, that if you see them today they don’t look that way.  Is it just a question of your size, or is something more at work?  It has been shown that size illusions operate when you make people apparently small or big – like if you were the size of a Barbie doll, how would you see the world?  You see it bigger.  What we found though goes beyond that.  In the two conditions (child or shrunk down adult) both overestimated sizes of objects, as expected.  However, the child condition led to much greater size overestimation.  It must therefore be not just the size but the form of the body that is having this effect.

We also gave people an implicit association test.  This requires people to quickly categorise themselves according to child or adult attributes.  Their adult attributes (like their age, what they do etc) were obtained a while before the experiment from a questionnaire.  Those in the child condition nevertheless were found to identify themselves more with child like attributes than those in the adult condition.

The body has a kind of semantics, meaning is attributed to a body type.  In this case it was a child’s body, something of which we’ve all experienced. Perhaps embodying people in such a child-like body automatically leads the brain to bring to the fore types of mental processing that go along with being a child.  We have only shown this with respect to size perception, and implicit associations, but maybe there is more to this.  Also we do not know how long the effects last – much work remains to be done.

Check out some of his other posts such as Racial Bias and Virtual Embodiment, The Presence of Shy Men, or The Illusion of Violence. 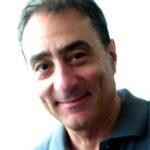 Mel Slater is an ICREA Research Professor at the University of Barcelona. He became Professor of Virtual Environments at University College London in 1997 where he still maintains a small research group. He won a UK Engineering and Physical Sciences Senior Research Fellow from 1999 to 2004, and received over 1.5M euros of funding for his work on the virtual light field approach to computer graphics, and over 1.5M euro of funding for a virtual reality Cave system at UCL. Thirty of his PhD students have obtained their PhDs since 1989. In 2005 he was awarded the Virtual Reality Career Award by IEEE Virtual Reality ‘In Recognition of Seminal Achievements in Engineering Virtual Reality.’ He leads the eventLab at UB. He is Coordinator of the EU 7th Framework Integrated Project VERE, and scientific leader of the Integrated Project BEAMING. He holds a European Research Council grant TRAVERSE  on the specific topic of virtual embodiment, and the general topic of a new area of application of virtual reality based on this theme. He recently started a new project under the John Templeton ‘Immortality Project’ scheme.