Effectiveness of conservative therapy for cervical radiculopathy – rooting out what works

Cervical radiculopathy is severe arm pain originating from a pinched nerve in your neck. It is different from non-specific neck pain and treatment guidelines should be different also. Surgery has proven to be very unsuccessful, so our systematic review focused on which conservative therapy would be most effective. The “blinding” of patient, therapist and outcome assessor is an important aspect of the Risk of Bias (RoB) assessment of individual trials. Due to the ‘hands-on’ nature of conservative therapies, this proves near impossible. Both therapist and patient are aware of which therapy is provided and as the outcomes are usually patients self-reporting, the outcome assessor isn’t blinded either. Only one trial (Klaber Moffet, 1990) managed to effectively do this: they compared traction with placebo traction and they reported no difference in effectiveness. Three trials compared intermittent to continuous traction and found no difference.

Other items RCTs struggled with, in regards to RoB, were the avoiding of other therapies for participants during the length of the trial and the similarity of patients between treatment groups at base line. We considered only 2 out of 11 trials to have a low RoB. We also looked at how strong the evidence for or against the effectiveness of an intervention was. Due to the small numbers of patients in each trial and the sometimes conflicting results, the general level of evidence was low to very low. Therefore, based on these results, no definite conclusions can be drawn nor guidelines issued. They mainly show low level evidence supporting that a collar is equally effective as physiotherapy at short term follow up. In general, after 12 months, there was no difference  when comparing traction, general physiotherapy, doing exercises, wearing a collar or doing nothing. Not surprising as the natural course suggests problems resolve in 6-9 months anyway. Also not surprising as each trial we found compared only one single intervention to one other which is not how one would normally treat patients. Not very helpful then, this review? Well, fortunately in the short term, and that is what matters when you are in pain, there is a difference! Our review indicated that wearing a soft collar and/or doing specific physiotherapeutic exercises provided better results in the first 3-6 weeks than doing nothing and even up to 12 weeks when compared to surgery. The most clinically relevant reduction (positive effect size) was by wearing a collar in reducing arm pain by some 20 mm on a 100 mm VAS in the first  6 weeks (-20.1, 95%CI -30.4 – -9.8) (Kuijper, 2009).

This then leads to some hypothesizing. Combining clinical experience with contemporary research, it would make sense that the kind of treatment of a radiculopathy would depend on the stage it is in: a more hands-off pharmaceutical approach in the acute inflammation stage, turning into a more active multi-modal approach aimed at the functional restoration of the ensuing physiological changes. Now there is a subject for some decent trials 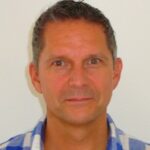 Erik  is a physiotherapist with a degree in sportsphysiotherapy as well manual therapy. As a former teacher of both physiotherapy undergraduates as well as post-graduate manual therapy students, he still teaches CPD courses nationally and internationally with a special interest in clinical reasoning and motor control dysfunction. Currently he mainly works as a clinician (together with his wife) in their own private practice in The Netherlands. He has published two reviews on cervical radiculopathy, one of which is the subject of this current blog. Erik has been a member of the Executive Committee of the International Federation of Orthopaedic Manipulative Physical Therapists (IFOMPT) since 2008