Breaking it, Faking it and Making it to the World Championships

Home / Breaking it, Faking it and Making it to the World Championships 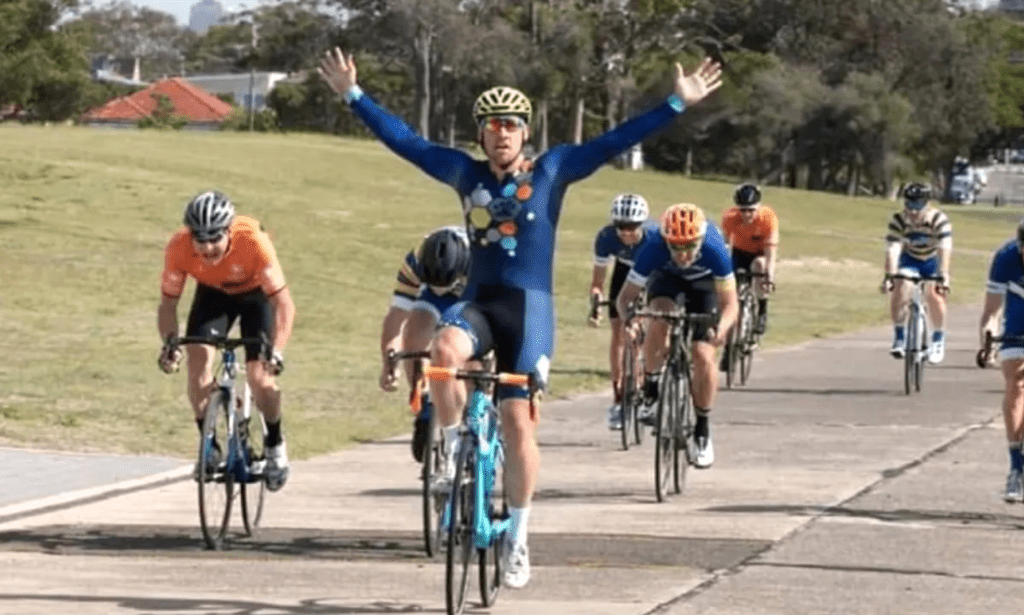 Dan Van Der Laan has been a trusted Ride Guide and supporter of Pain Revolution for the past two Rural Outreach Tours.  Here is his story:

Ever since I was a kid two things have been true. I have loved sport and competition and I have had an uncanny ability to get injured. These things remain. I need a competitive outlet and I have visited almost every hospital in the greater Sydney area, I am expecting a loyalty card. While I was used to getting injured it usually passed quite quickly and I would be back to sport in no time. However, something very different happened around 7 years ago.

I was riding on my way to a clinical placement as a physiotherapy student when I was hit by a car. Again, this sent me to hospital with most of my body sore. I had quite a bad fracture to my finger which was the main concern at the time.

After a few days (pretty much the whole time laying down) I was released. As soon as I stood up I felt pain in my right hip, which was the main point of impact, which didn’t feel good at all. But home I went to carry on hoping it would settle. Over the next few days I kept thinking this isn’t settling, so I set about trying to find out what was wrong.

I had an x-ray from the hospital, but they can miss things, so off to the doctors I went. An ultrasound showed some bursitis at the greater trochanter however I felt it was worse than that and it felt deeper. A little bit of knowledge here was bad, I started looking into all the potential issues I could have and decided I needed a MRI to really know what was happening. I talked the doctor into getting me a MRI which showed a labral tear with an associated cyst.

Then, I got a referral straight to a surgeon. No rehab, no real attempt at conservative management. I saw the surgeon who said I would likely need surgery but let’s try a cortisone injection first. Of course, with being primed I was going to need surgery, the cortisone didn’t do anything and I was in for surgery. I had the surgery 3 months after the original injury without ever really trying rehab or conservative management.

The Start of the Surgeries 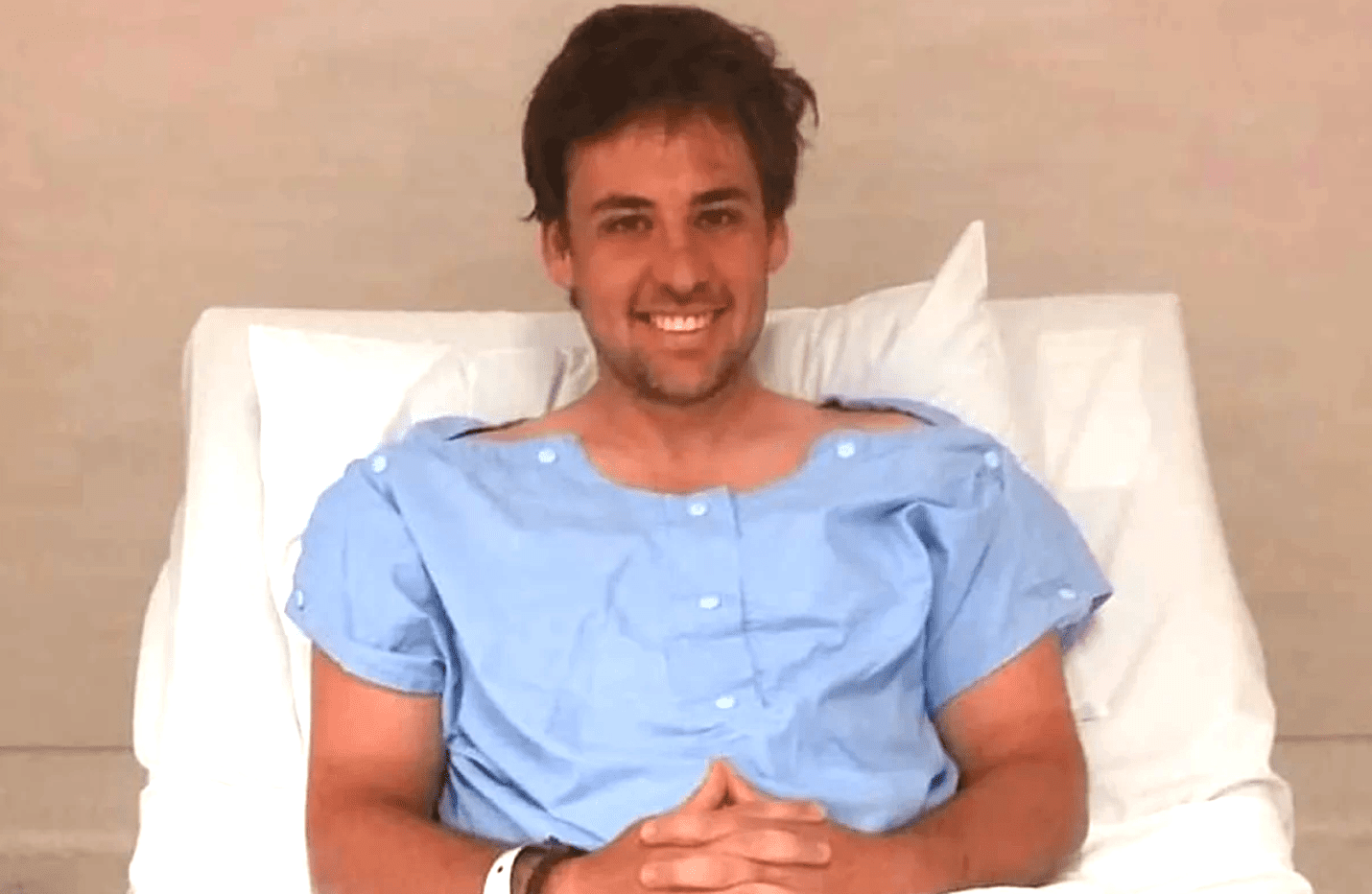 I was in and out nice and quick being an arthroscope with labral repair it was just day surgery. I was sent home with no real rehab instructions and just instructions to “rest it till you see me”. So I was back again a couple of weeks later. Wound check surgeon told me what he did he was extremely happy with his job.

I asked about rehab he said he “didn’t believe in physio and I was fixed now”. Despite this, the pain still persisted. Over the next few months I was in and out with I think it was 3 cortisone injections because I was told they would fix it. In the end, I gave up, started to do my own rehab (being a motor vehicle accident unless I was referred to physio I couldn’t actually receive it) and got back on the bike. It was tough and not the most comfortable at first but I found it slowly improved.

Finally, after about 6 months, I started to feel like I was getting better. 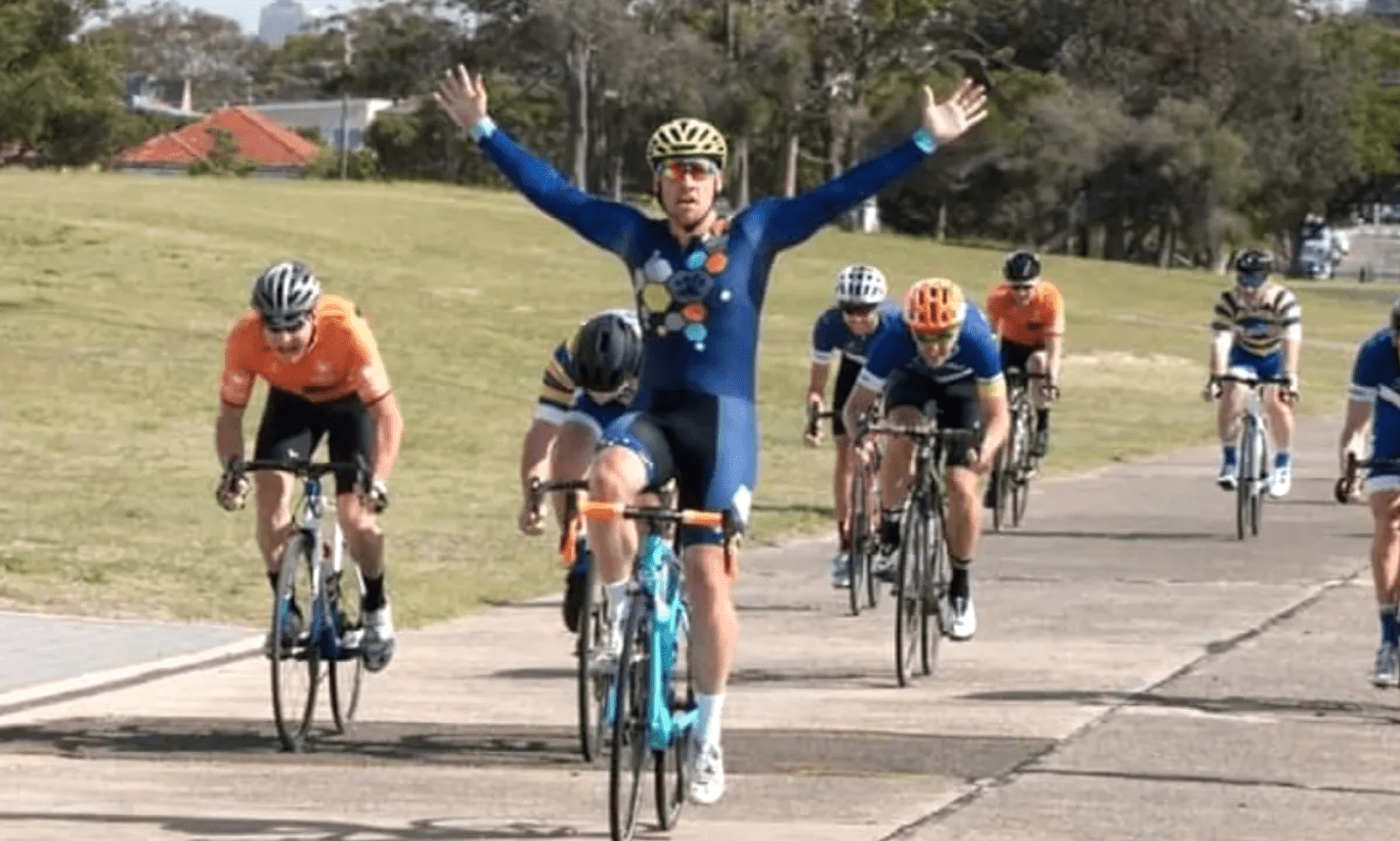 The Beginning of Persistent Pain

There was a good period here, however the pain never completely went away. I always had issues. Then I gradually found I was worsening. This time it wasn’t just pain. My hip was getting stiffer, unlike previously I was beginning to get pain at night.

By now I had graduated and was working as a physio. I found it tough to manage work and found I was often sore at the end of the day. I had started to get lower back and thoracic spine pain too. I wasn’t sleeping well because of the pain. It was stressing me. I wasn’t coping. I tried everything, physio rehab. I felt strong but I still had pain. I had developed such negative feelings about my hip and the accident. I decided I had to cut down and then quit work as I wasn’t coping.

During this process I got some more scans and found the repair had come loose and so I organised with a different surgeon to have a holiday then come back home and get another surgery. I went skiing in Canada. While the pain never went away over there I felt it a lot less. I coped better with it. I was able to ski and enjoy myself most the time but I never put it all together.

I returned home for a second arthroscope. I ended up spending over 3hrs under the knife and when I woke up I didn’t feel great like last time. I knew I wasn’t leaving straight away this time. My surgeon said the hip was worse than expected, with a lot more joint damage and he was under the belief the repair had been irritating the joint for a while.

I was back to the negative messages. It really wasn’t great. Over the next 6 months, I tried rehab again and a bunch of different injections (almost 10 all up) before deciding I needed a hip replacement. In November 2016, with over 4 years of persistent pain, and at the age of 25, I was going under the knife for a hip replacement.

This whole time I just wanted to get back to sport and my life I was desperate for it at this stage and I was willing to do any surgery that would let me get there.

I had the replacement and set about my rehab. I started swimming once the wound healed, this resulted in a wound infection around a month after the surgery back to hospital for a debridement and IV antibiotics for another few weeks. I ended up spending Christmas in hospital.

During all of this I realised I still had pain. I couldn’t figure it out. It wasn’t my hip but I continued to have trouble. It didn’t make sense. During my time off work when I was trying to get myself better I heard about Pain Revolution. I knew the names involved in it and I was interested. I decided I had to be involved in it so I contacted whoever I could find to volunteer my time. I had a passion for pain science through my own clinical work but never thought it would apply to me. I had colleagues discuss it with me, but I couldn’t see how it applied to me. My pain was “different” and I had “real injuries”. It took more time to realise that everything I’d learnt about pain DID apply to me!

Also, around this time I discovered I was eligible to be a para-cyclist due to the restriction in range at my hip from the original injuries and subsequent surgeries. I had a goal. As I sat in the hospital during the infection, I set out a plan to get myself better and compete as a para-cyclist. I wanted to go to the next Paralympics.

Early 2017 I joined the team for the inaugural Pain Revolution Rural Outreach Tour from Melbourne to Adelaide. I was a back-up ride leader and general dog’s body or helper. I was also there to learn. I had the opportunity to learn from and ask questions of some of the best minds in physio. That is exactly what I did. For the first time, I realised learning about pain was not only applicable to others, but also to me! It completely changed my perspective. 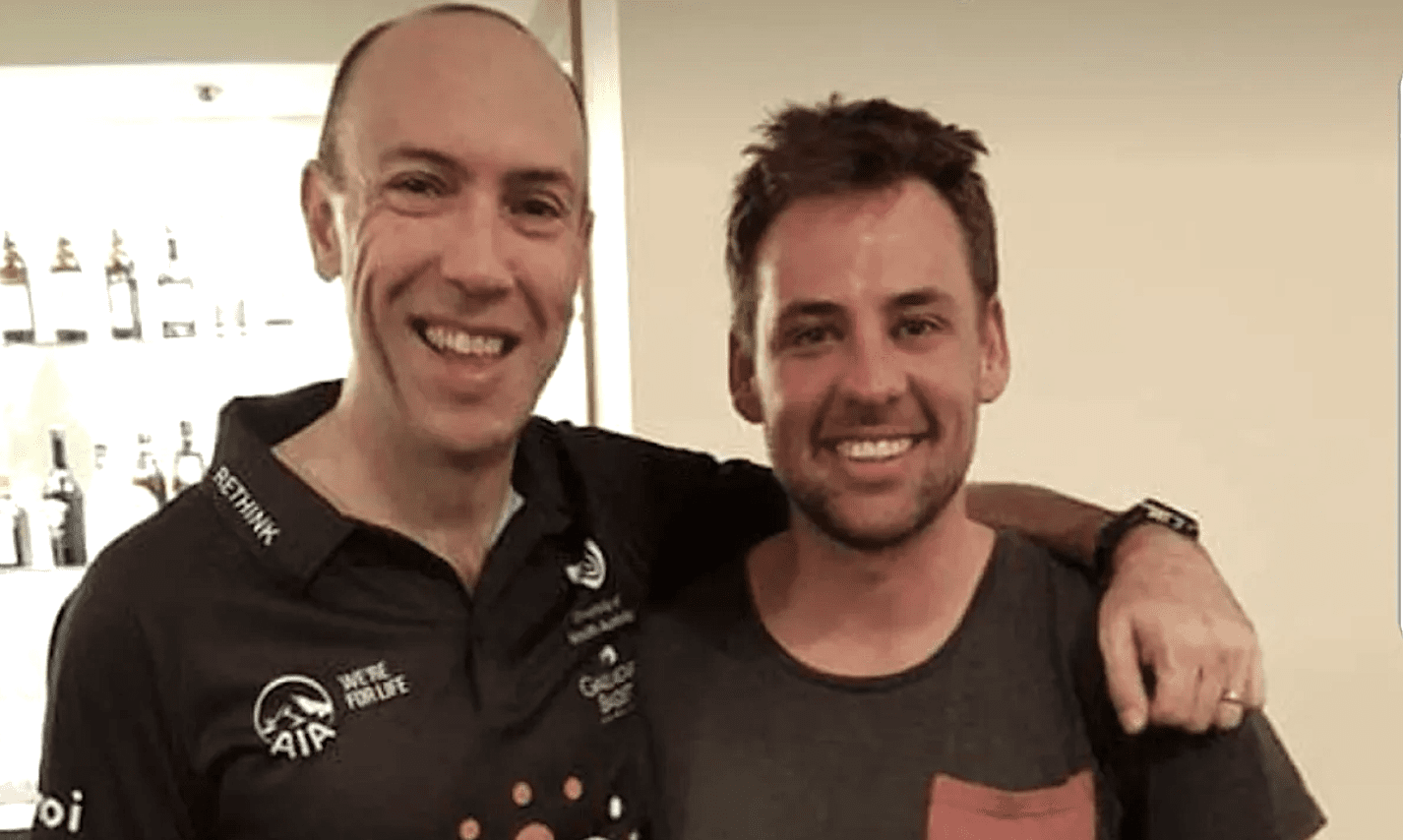 I learned how my mood affected my pain. When something else had upset me I would start to feel the pain. I found out how important sleep was. I discovered that every time anything would happen involving the legal case associated with my accident, I would feel much more pain.

I found control. I found a reason for feeling what I was feeling. For the first time, I truly felt like I understood it. I still had issues, though ever since the replacement I was unable to properly flex my hip. However, with my new understanding, it affected me less. I was able to control it more. I wasn’t getting as down about it. While I still experienced pain, it was much less and I knew there were things that I could do to make it feel better and it wasn’t just taking drugs or doing rehab, it was working on the other facets of my life.

Despite this attitude adjustment, I continued to have issues with my hip flexor. It appeared that it was just not working and I had some instability in the replacement. One more round of surgery didn’t improve anything. Then another, more invasive revision replacement which resolved the instability but not the flexor issues. With my new understanding, I found these surgeries affected me a lot less. I recovered quicker both with pain and function, which was a win I hadn’t expected. After that, I decided “that’s enough, I need to stop chasing the issues and deal with what I have.” 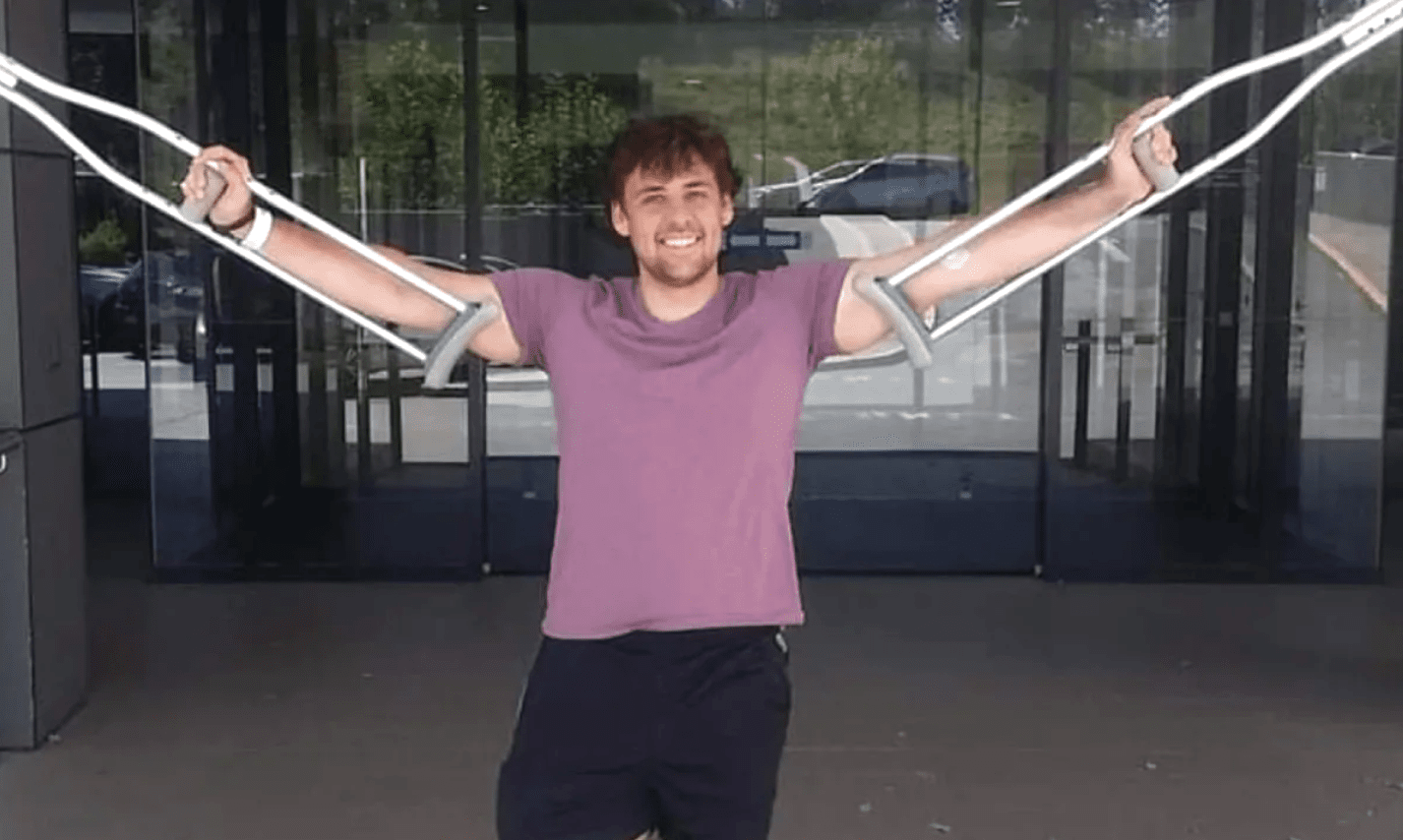 I set about returning to my dream of the Paralympics and I started to train. There was a lot of times in the period of reloading and returning to being competitive that the old me, and my old understanding of pain, would have just given up.

I had periods of pain during all of this but it didn’t stop me. With my greater understanding of the pain, my ability to deal with it and to find ways to get through it, everything changed.

Despite a number of setbacks and things still not going completely to plan, I have now managed to win 4 national championships in my para-cycling category and have been selected to represent Australia in March for the Para-cycling World Championships.

This is exactly what I was aiming for and a dream of mine as a kid.

It is a big step towards going to the Paralympics, but none of this would have been possible if I didn’t get involved with the Pain Revolution back in 2017 (and then again in 2018). I had given up on my competitive dream. However, the things I have learned from the great minds I got to spend time with has, and will continue to, hold me in good stead for being able to get on with life despite the pain.

Unfortunately, with World Championships being on at the same time as the Pain Revolution Tour, I won’t be there this year. I will miss it, and hope it is just as successful as ever. It is a great initiative and these are messages that are so worth spreading.

I hope the educational tour it can have the same impact on others dealing with persistent pain as it has on mine.

What I’ve Learnt about Pain (and myself!)

I sit here writing this less than 2 weeks after breaking my wrist during training. I have been able to keep training despite the injury and it will have minimal effect on my preparation, again, because of what I have learned and how I am able to understand and deal with pain. It applies to all injuries at all times.