From American flags to models of the spine – linking the impossible?

Home / From American flags to models of the spine – linking the impossible? 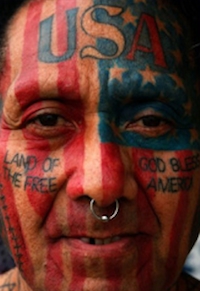 I have just come across an intriguing paper in Psychological Science by Travis Carter and his mates in Chicago.  They did an experiment in which Americans who were filling out political surveys did so with either a small American flag in the corner of the screen, or nothing in the corner of the screen. They analysed the participants’ responses to the survey, assessed explicit attitudes and beliefs via direct questions (eg How much do you like Obama?) and they assessed implicit attitudes and beliefs using the implicit association task (IAT). They reassesed participants up to eight months later.  Their data are pretty compelling – on all measures those who saw the American flag during the initial survey were more ‘Republican’ than those who did not.  More Republican in their attitudes, beliefs, fondness for politicians and evaluation of their political performance. This single exposure even seemed to change the way they voted!  Travis and his team then replicated the effect with a different party in power, which means it is about Republicans not the party in power.

Now there is no doubt in this Australian’s mind that the American flag is as sacred to Americans (I always feel a bit dodgy calling the USA America – on what continent is Canada? Peru? Brazil? Chile……nonetheless, I will follow what seems to be convention. Is it also convention in Canada? Peru? Brazil….) I, yet again, digress.  So, people from the USA seem to LOVE the Stars and Stripes – Old Glory – The Star-spangled Banner (so much so these nicknames get proper noun status!)  I am always impressed by the number of cars, buses, houses, bicycles, t-shirts and shops that proudly fly the flag.  Australia and England seem to only approach this level of flag-wavingness if their team is competing in something they have a faint chance of winning. Perhaps the USA is always competing in something, somewhere, with a better than faint chance of winning.

Anyway, that the meaning of the flag seems to permeate so deeply the workings of an American brain has clear implications for one of the bees in my bonnet – those anatomically inaccurate models of the lumbar spine. I know they hold none of the ‘meaning-power’ of the American flag for most of us, but what meaning-power do they hold for someone whose back pain is ruining their life?  We have shown that seeing a red light when you get a very cold noxious stimulus makes it hurt more than if you are shown a blue light – there is clear meaning there – and marketing people are pulling a semiotic swifty on us most of the time I imagine. What happens when someone with back pain, who is primed up to look for clues as to the meaning of their back pain, walks past your desk and sees the LAFT (living adaptable force transducer), formerly known as an intervertebral disc (see: Butler, DS & Moseley, GL, Explain Pain. Noigroup publications 129 pages), all red and swollen and slippable. Could that visual image change attitudes, beliefs and behaviour in people with back pain like the American flag seems to in Americans?  Indeed, could the very notion of a slippable disc modulate those variables in people with a back?  Keep a look out for Adriaan Louw because he is doing a project on this very type of thing, as part of his PhD. 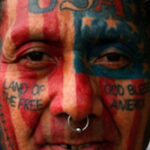 Finally, I can’t help but spare a thought for the Democrats – how do they get around this curly one? Tattoo an American flag on their forehead? Hang on – that’s already been done