Sex Differences in the Contextual Control of Conditioned Pain Tolerance

Recent work suggests context contributes to pain perception when experiencing or anticipating pain, and endogenous opioid systems are involved in a sex-specific manner. 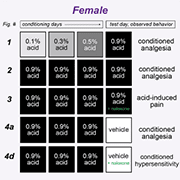 Recent work suggests context contributes to pain perception when experiencing or anticipating pain, and endogenous opioid systems are involved in a sex-specific manner.

The exact process underlying the transition from acute to chronic pain is unknown, but the persistence or strengthening of acute pain memories has been hypothesized to contribute to the development of chronic pain.

By repeatedly pairing a noxious visceral stimulus (acetic acid) with a unique context (a behavioral chamber), Trask and Sadler observed male mice developing conditioned hypersensitivity when re-exposed to a painful stimulus in an environment previously associated with pain. In contrast, female mice in the same situation display opioid-mediated conditioned analgesia.

These findings demonstrate that context influences pain perception when an animal is experiencing or anticipating pain. The divergent results in male and female mice also suggest there are sex differences in the biological processes mediating pain expectations.

Martin – in collaboration Jeffrey Mogil – had previously shown that environmental context influenced pain behaviors in male mice and humans, where males of both species exhibited stress-induced analgesia if tested in an environment previously associated with pain (Martin et al., 2019related PRF story). Martin was not involved in this current research.

“Females simply have a compensatory mechanism to prepare them for impending pain, which is mediated through activation of the endogenous opioid system,” said Martin.

This research was first published in eLife on 11 March 2022.

In their search for novel, effective analgesics, preclinical researchers often focus on highly standardized tests and procedures to determine how proteins and genes contribute to nociception. As an unintended consequence of this approach, less focus has often been placed on the influence that external factors have on pain perception and the development of chronic pain.

According to the “Imprecision Hypothesis,” associative learning may contribute to the development of chronic pain (Moseley and Vlaeyen, 2015). This process involves the repeated coupling of a noxious stimuli with a neutral cue or environment so that, over time, presentation of the neutral cue or environment alone can elicit the perception of pain or pain-related behaviors.

A serendipitous encounter during the COVID-19 pandemic provided Trask, Sadler, and their colleagues with an opportunity to explore how contextual learning contributes to pain-related behaviors.

“Over the pandemic, Kate [Sadler] moved in with me,” Trask recalled. “Given the social distancing [requirements], we ended up spending a lot of time together. As we are both scientists, we spent a lot of time talking about our research.

“Kate was telling me about the types of [pain] behaviors she observes in her research, and I thought most of the behaviors could be explained by learning theory. Like most people, Kate responded with, ‘What are you talking about?’”

“I had previously taught learning theory to one of Kate’s college classes, where I told [the students] about a conditioned compensatory response, which is an interesting finding from the 1980s that hasn’t received as much attention in recent years,” continued Trask.

“We designed an experiment based largely on [Shepard] Siegel’s conditioned compensatory response looking at contextual pain tolerance and ran from there. It grew in an organic but fun way.”

Siegel, a Canadian psychologist (McMaster University, Ontario, Canada), expanded on Pavlov’s historical conditioning work to demonstrate that the immediate environment – the context – could also elicit conditioned responses. His research involved treating rats with increasing doses of heroin in a distinct environment before administering a near-lethal dose in the same environment or a novel one (Siegel, 1977Siegel et al., 1982).

So Trask and Sadler set out to determine whether animals exhibit a conditioned compensatory response to painful stimuli, and if so, what the physiological basis of this response could be.

Across a series of experiments, mice were conditioned to associate two distinct contexts – a chamber with four plain black walls or a chamber with two plain black walls and two striped walls – with either the repeated intraperitoneal administration of a mild visceral pain stimulus (acetic acid) or saline over three days. On the final day (day 4), mice would receive an injection of acetic acid before being placed in both contexts and their pain behaviors – writhing and mechanical sensitivity (measured using von Frey filaments) – were observed.

In the initial experiment, male and female mice were administered increasing doses of acetic acid (ranging from 0.1% to 0.5%) over the first three “training days,” before receiving a 0.9% dose on the conditioning day (day 4) in both the familiar and novel contexts.

Male mice displayed similar levels of mechanical sensitivity in both the acetic acid- and saline-associated chambers on day 1 and day 4, suggesting associative learning did not enable environmental control of pain sensitivity in males. In contrast, female mice developed context-dependent analgesia – displaying greater mechanical sensitivity on day 4 when placed in the chamber associated with saline injections versus the acetic acid-associated chamber – despite receiving the same dose of acetic acid before being placed in each chamber.

“Similar to what Siegel saw in his classic papers where rats developed a tolerance mechanism to heroin – to the point where they can receive a lethal dose and survive – we can give [female] mice a high dose of acetic acid in a place where they’ve previously had pain and they don’t look like they’re in pain anymore,” explained Sadler.

In a subsequent experiment, mice were administered the 0.9% dose of acetic acid on all three training days in the acetic acid-associated chamber, as well as in both chambers on the testing day. This combination resulted in conditioned analgesia – specifically, decreased mechanical sensitivity – in both male and female mice.

What causes these conditioned responses?

Trask and Sadler switched from a “within-subjects” approach to a “between-subjects” approach to unpack the biological basis of the observed conditioned analgesia. Unlike the previous experiments, mice were only trained in one context (chamber), allowing for the isolation of the physiological changes occurring in each environment.

Data from male and female mice were not initially tested separately, as both displayed conditioned analgesia in the previous experiment. The previous high-dose administration pattern (0.9% acetic acid) was repeated across three training days, but this time, circulating corticosterone levels were examined immediately after withdrawing the mouse from the chamber. Corticosterone levels were similar between acetic acid- and saline-trained mice, meaning the observed behaviors were not forms of stress-related analgesia or hyperalgesia.

“This study also builds on the fear conditioning work undertaken by Michael Faneslow’s lab in the 1980s,” Trask highlighted. “[Study collaborator] Fred Helmstetter co-authored a lot of this work with Faneslow at the time, and they found the conditional analgesia observed in fear conditioning studies was dependent on the endogenous opioid system. So we thought it could underlie the conditioned analgesia we saw in our current study.”

To test this theory, the “three-day training, between-subject” paradigm was repeated. However, this time animals were also injected with naloxone – an opioid receptor antagonist – before they were placed in the testing context on the final day.

Despite these results, the authors were not convinced the compensatory analgesic response was truly context dependent, as all their experiments thus far had involved an acetic acid injection on the testing day (day 4). To determine whether it was a true response, the paradigm was altered so that saline was administered on the testing day.

The addition of naloxone did not lead to different results in male mice. But the conditioned analgesic response was removed in female mice, who instead displayed conditioned hypersensitivity. Taken together, these data suggest the endogenous opioid systems are not engaged by the context unless this context is paired with a painful experience.

“If you give the mice an injection of naloxone, but they’re not experiencing pain, you can actually induce pain,” Sadler summarized. “You’re essentially unmasking the ongoing pain that is already being dampened by their activated opioid systems.”

Trask and Sadler are excited by these findings and already have plans to continue this line of research.

“It’s a really unique project – bridging learning theory and pain neuroscience – and we’re definitely interested in continuing these studies,” Sadler concluded. “I’ve sent brain [slices] from these animals to be stained to start figuring out what brain regions may be activated in these specific environmental contexts so we can start teasing apart the circuits that might regulate the endogenous opioid control.”

“The sex differences are the one area where things don’t make as much sense,” said Trask. “[But] we’re still collecting some data now…. I feel we’ve got some good ideas about how this is going to work at a circuit level – it will be figuring out the finer details. It’s going to be exciting for the both of us to continue this work.”

The pair are also keen to explore how conditioned compensatory responses are affected in chronic pain.

“Thinking about this in the context of chronic pain is where this will be really interesting,” Sadler told PRF. “Our results are the opposite of what you might expect when you place female rodents into an environment like that…. One might logically think that females would feel less pain in environments where they have experienced pain before. But that is in direct contrast with the fact that there are more female chronic pain patients than male chronic pain patients. So does the context of chronic pain completely flip this system or process in females so they are now more susceptible or have higher levels of pain when they are placed into environments where they’ve experienced pain in the past?”

Martin agrees that continuing this line of research could yield huge benefits.

“Expanding on these findings to determine the site(s) of endogenous opioid-mediated control of pain would be a huge step forward in understanding the transition of acute to chronic pain and potentially resilience to pain,” Martin told PRF. “For example, what higher brain centers control this type of pain modulation, and are they similar or distinct to those regions considered integral for other types of associative learning, like fear conditioning?”

It will be fascinating to see what other important findings this chance pairing can identify in the coming years.

Lincoln Tracy is a researcher and freelance writer based in Melbourne, Australia. You can follow him on Twitter – @lincolntracy.