New Clinical Trial Shows No Benefit of High-Intensity Strength Training for Knee Osteoarthritis Pain – But Don’t Give Up on Exercise!

Researchers try to make sense of a negative result. 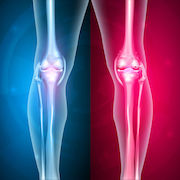 Researchers try to make sense of a negative result.

About 14 million Americans live with knee osteoarthritis (KOA), a disease of the joint in in which knee cartilage breaks down over time. This chronic condition is associated with a high level of discomfort and pain, and most people diagnosed with it will eventually experience significant disability as the knee deteriorates over time.

Current clinical guidelines state that people with KOA do strength training to help bolster the muscles surrounding the knee joint to help facilitate movement, maintain cartilage integrity, and reduce pain. But researchers did not know whether high-intensity training, which uses heavier weights and fewer repetitions, might offer more benefit than low-intensity training.

Now, with a new clinical trial that followed 377 individuals with KOA over an 18-month period, researchers from Wake Forest University, Winston-Salem, US, found no significant differences in pain or knee joint strength between high- and low-intensity exercise groups. Moreover, there was no benefit of high-intensity exercise over healthy lifestyle education that an attentional control group received, even though participants in the exercise groups did show increased knee strength from their efforts.

Deepak Kumar, a physical therapist who studies KOA interventions at Boston University School of Medicine, US, but was not involved with the new work, said that “this is a study that needed to be done.”

“This is very important work,” Kumar said. “It’s good to see that this study included a very rigorous control intervention that seemed to lead to a lifestyle behavior change, and when exercise was compared to that, there did not appear to be an additional benefit with regard to pain relief. This trial definitely moves the field forward and raises some important questions about the roles of exercise and self-management for pain improvements in KOA.”

Is high-intensity training better for pain?

A 2013 study by Stephen Messier, Wake Forest University, Winston-Salem, US, and first author of the current trial, demonstrated that a 10% weight loss induced by diet, along with moderate exercise, led to a 50% reduction in pain in overweight and obese people with KOA (Messier et al., 2013). While that trial offered some guidance to clinicians aiming to reduce their KOA patients' pain, Messier said he quickly realized that “not everyone can lose weight” and wondered if there might be another way to change the composition of the thigh muscles – more muscle, less fat – to ease pain.

“We are talking, primarily, about the thigh – the quadriceps and the hamstring muscles,” Messier told PRF. “We know that they are weaker in individuals with KOA. If we can strengthen those muscles, we thought they might act as a shock absorber and reduce the stress on the knee. We thought high-intensity strength training might provide a way to change the composition of the thigh so there is more muscle and less fat, which should also have an anti-inflammatory effect, leading to less overall pain.”

Individuals in the high-intensity strength training group met three times a week over 18 months to participate in training sessions that included six lower body exercises, including hip abduction, hip adduction, leg curl, leg extension, leg press, and seated calf raise, as well as upper body and core exercises. Staff interventionists assessed participants to identify the maximum amount they could lift, during one repetition, on a single leg for each lower body exercise. They then used this one repetition maximum (1RM) test to determine the weight used during training.

Then, participants were asked to perform three sets of 75% of their 1RM weight, with eight repetitions per set, for the first two weeks. As they progressed, the weight increased and the repetitions decreased: 80% of 1RM for eight repetitions during weeks three and four, 85% of 1RM with six repetitions during weeks five and six, and 90% of the 1RM with four repetitions for weeks seven and eight. During the next week, the 1RM was reassessed, and the participants trained using the same formulas for the next eight weeks. This blocked pattern continued for a total of 18 months.

The low-intensity group, in contrast, was asked to perform a higher number of repetitions at lower weights. While the training sessions lasted the same amount of time, the participants in this group did three sets of 15 repetitions at only 30%-40% of their 1RM. They followed the same block pattern as the high-intensity group, reassessing their 1RM number to refine their weight levels every eight weeks.

Finally, those in the attentional control group met biweekly for 60-minute group workshops for the first six months of the study, and then continued to meet monthly for the remaining year.

“These workshops gave the participants education on how to live a healthier lifestyle,” said Messier. “We told them that they should exercise and lose weight to help them better manage their KOA, but we didn’t push that over other healthy lifestyle recommendations. We just gave them information on what could help.”

At the end of the 18-month trial, the researchers were surprised to discover that there were no differences in pain scores between the high-intensity group compared to the low-intensity group or to the control group; all three groups showed about a 30% reduction in pain, as measured by the Western Ontario and McMaster Universities Osteoarthritis Index (WOMAC) questionnaire. Nor were there differences among groups on measures of maximum knee joint compressive forces experienced during walking. Participants in all three groups had increased muscle strength.

“After 18 months, the intervention did exactly what it was supposed to do – it increased muscle strength but, when we did a biomechanical analysis of the forces on the knee, it did not absorb any more shock the way we thought it would,” Messier said.

“It was a little shocking that you didn’t need to do the higher-intensity work in order to increase your strength, from a statistical standpoint," Messier continued. “And our control group showed that paying attention to people and educating them about a healthy lifestyle has some of the same effects. Even though we didn’t push exercise, their physical activity increased from baseline, which could partially explain our results. It has definitely given us a lot to think about.”

Researchers who spoke to PRF suggested the study’s negative results may be due to contextual effects – environmental factors that may influence an individual’s response to a treatment. Another possibility is regression to the mean, a statistical phenomenon in which an extreme result upon a first measurement moves closer to the average upon a second measurement.

“It’s possible that patients enroll in studies when they are in a bad phase of their disease,” according to Martin Englund, Lund University, Sweden, who studies osteoarthritis but was not involved with the trial. “Typically, pain fluctuates over time. If someone enrolled in the study at their peak of pain, just by waiting per se, they would improve, irrespective of any treatment. That could be happening here.”

Englund also said the trial was a “well-executed” study and found it “striking” that the exercise training was effective in strengthening the muscles but did not translate into a greater improvement in pain.

As far as exercise goes, Tuhina Neogi, a rheumatologist and epidemiologist at Boston University, US, who was also not involved with the trial, said the results do not suggest that people with KOA pain shouldn't exercise. Instead, she said, the findings suggest there are different ways that people living with KOA can reduce their pain.

“One interpretation of these results is that all of these modalities are beneficial – maybe there isn’t a hierarchy that one is, overall, better than another at first pass,” she said.

“So in terms of counseling patients with KOA,” she continued, “perhaps you don’t have to pick high-intensity over low-intensity training for first-line management, or even strength training over lifestyle education, to provide benefit to patients. Rather, you can work with a patient’s particular needs and abilities to help them choose the intervention or interventions that will help them best manage their condition.”