A unique population of peptidergic nociceptors regulates a variety of cell types in lymph nodes. 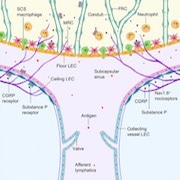 A unique population of peptidergic nociceptors regulates a variety of cell types in lymph nodes.

Isaac Chiu, who investigates the role of the nervous system in immunity at Harvard Medical School, called the new paper a “technical tour-de-force” and an “elegant study.”

The research appeared in Cell on January 21, 2021, while the Spotlight was published on March 1, 2021, in Trends in Immunology.

Lymph nodes are found throughout the body, and collect, filter, and monitor interstitial fluid (lymph). They are important sites for launching the adaptive immune response, allowing us to fight off infection.

Previous studies from the 1980s showed that lymph nodes are innervated by neurons that release norepinephrine or small peptide molecules that act as neurotransmitters, also known as noradrenergic or peptidergic neurons, respectively. (Felten et al., 1985Fink and Weihe, 1988). But until the new publication, there was no in-depth characterization of these cells. Potential interactions between these neurons and lymph node cells were also not well understood.

To characterize the sensory neurons that innervate lymph nodes, the authors first used immunohistochemistry to determine that two independent populations of neurons – sensory neurons and sympathetic neurons – were found in and surrounding the lymph nodes. These populations were independent of one another; removing or depleting one neuron type did not affect the other type.

Using retrograde labeling, the group also traced the sensory neurons that innervated the inguinal lymph node, located on the mouse's hind limb toward the groin, back to their cell bodies residing in the dorsal root ganglia (DRG) and to their entrance into the spinal cord. The researchers then isolated and performed single-cell RNA sequencing of neurons shown to innervate the lymph node, using neurons that innervated the skin as controls. They found that most of the neurons expressed the sodium channel and nociceptive marker Nav1.8, and the high-affinity receptor for nerve growth factor (NGF), TrkA, and calcitonin gene-related peptide (CGRP). The expression of these markers suggested that the neurons are peptidergic.

The group then looked to two single-cell RNA sequencing DRG atlases published previously (Usoskin et al., 2014Sharma et al., 2020). The researchers found that the lymph node-innervating sensory neurons they had isolated most resembled peptidergic neurons and specifically four peptidergic subtypes (called CGRP-ƞ, -ξ, -γ, and -ε). These results suggested that, although the neurons the team had collected were diverse, they displayed a robust peptidergic phenotype.

The investigators next examined the differential expression of genes between skin- and lymph node-innervating sensory neurons. This revealed differences in expression levels of many ion channels, synaptic proteins, and secreted and cell surface molecules. Further, the neurons innervating the lymph nodes overexpressed genes with inflammatory- or immune cell-interacting activities. This suggested an enhanced ability to monitor the inflammatory and immune state inside the lymph node.

“Sensory neurons that supply the lymph nodes appear to have a signature that's discrete from neurons elsewhere," von Andrian said.

The neurons also expressed multiple Toll-like receptors (TLRs), which are innate sensors of a proinflammatory environment. An injection of lipopolysaccharide (LPS), a TLR4 ligand, or Pam3CSK4, a ligand for TLR1 and TLR2, into the footpad caused an increase in the volume of sensory fibers innervating the lymph node, though there was no change in sensory fiber density. This finding was consistent with previous work that sensory innervation can go up at sites of inflammation. 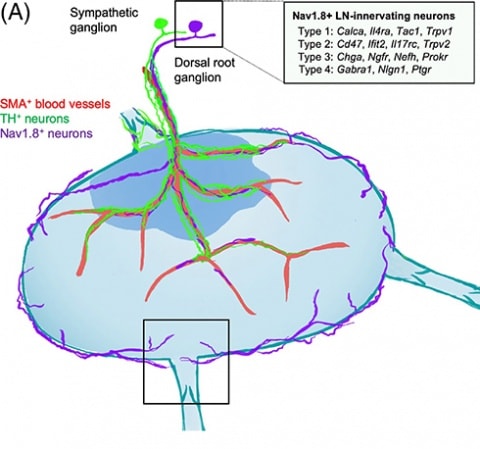 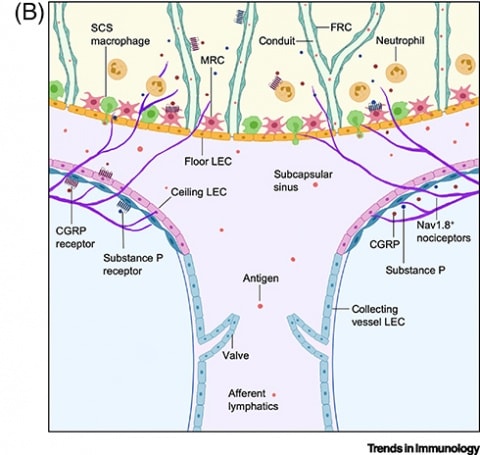 For the next set of experiments, which aimed to identify lymph node cells that the sensory neurons interacted with, the team began by processing inguinal lymph nodes for single-cell transcriptomic sequencing. Using a technique called immunomagnetic depletion, the investigators removed T and B cells from a set of samples to focus on rare cell types; the remaining cells were processed for sequencing.

This analysis revealed 24 distinct cell types from all the major populations of myeloid, lymphoid, and stromal cells known to reside in lymph nodes. An “interaction potential” was then determined computationally based on the number of ligand-receptor pairs between the lymph node cell type and the lymph node-innervating neuron.

Next, to understand how activation of the sensory neurons that innervate the lymph nodes could affect these various lymph node cell types, the authors used a mouse line in which Nav1.8+ sensory neurons expressed the light-sensitive protein channelrhodopsin. With this optogenetic approach, the group could activate sensory neurons innervating the inguinal lymph nodes with blue light. These lymph nodes were also processed for single-cell RNA sequencing and depleted of T and B cells.

Interestingly, the results indicated robust transcriptional changes in LEC 2, BECs, NESs, neutrophils, and natural killer cells. This suggested that the lymph node-innervating sensory neurons could modulate those cells. LEC 2 was the most affected cell type and displayed the highest interaction potential with the neurons. The magnitude of gene expression changes seen across many cell types correlated with the interaction potential the researchers had calculated.

Finally, some LEC 2 genes capable of interacting with the sensory neurons were downregulated after optogenetic stimulation. This pointed to a negative feedback loop that might maintain or restore homeostasis by keeping in check the impact of neuronal stimulation on LEC 2 when initiated; the suppression or downregulation of surrounding immune cells by activated neurons has been observed in previous studies (see PRF related news story).

Von Andrian and colleagues are now keen to understand how long-term stimulation of the lymph node-innervating fibers could affect immune responses such as lymphocyte trafficking. In the current study, they could only use optogenetic stimulation for three hours. More prolonged exposure to the light could produce inflammation and tissue damage, which would be confounding factors.

“Most immune responses of interest take several days to evolve. This approach doesn't lend itself to doing immunology the way we would like to do it,” von Andrian said. He sees a need for technological advances to allow for less invasive but long-term stimulation of the neurons.

The new work could lend some insight into the mechanisms of pain development during lymph node swelling upon infection. Here, Chiu wondered if there could be a feedback loop in which an active neuronal response could decrease or increase the swell of the lymph nodes.

Lots of other questions remain.

“Whether and how signaling from sensory or sympathetic nerves might coordinately act on both blood and lymphatic vasculature will be a key question for the future,” wrote the authors of the Spotlight. “Indeed, nociceptor depletion in mice has been correlated with changes in LN [lymph node] cellularity, suggesting a role for these sensory nerves in regulating antigen retention and flow through LNs…. Further investigations into disrupted signaling from specific nerve types to LNs might reveal how neuronal communication to stromal and immune cells is mediated. Future studies should also address whether input from lymph can trigger activation of sensory and sympathetic neurons in the converse direction of communication.”

As for the study authors, co-first author Huang said that their research “not only puts lymph nodes on the map as a site of neuroimmune communication but also brings the complexity of neuroimmune interactions to the forefront by showing that not all sensory neurons, not even the ones that innervate the same lymph node, are created equal and that different cell types can be targeted by sensory neurons differently, which might also vary by organ.

“In order to better understand the cellular and molecular mechanisms of neuroimmune interactions,” Huang continued, “it therefore pays to take a more unbiased approach, like what we have established in this work, to uncover the true diversity of the neuronal players and their interactions with the many immune players.”