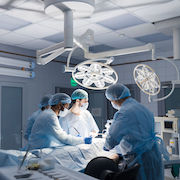 Surgical patients undergoing general anesthesia are usually thought to lack awareness of their environment and be unable to respond to external stimuli – how could it be otherwise when a person is “put to sleep” by the anesthesiologist? In fact, though it is rare, some patients do report that they have some awareness while under the knife, while it is not uncommon for others to respond to external stimuli though not to remember doing so. All of this must be a bad thing – or at least that has been the prevailing assumption. However, several studies have actually attempted to leverage intraoperative awareness for beneficial purposes, but with mixed effects.

Now, researchers led by Ernil Hansen, University Hospital Regensburg, Germany, show that for surgical patients under general anesthesia, playing an audiotape containing positive therapeutic suggestions reduces postoperative pain and opioid use. This approach, if confirmed in future studies, could help the more than 200 million people who have surgery each year, and fits well with the pain field’s current interest in finding non-pharmacological therapies for pain.

The study and editorial were published December 10, 2020, in The BMJ.

The first report of patients reacting to external signals and suggestions while under general anesthesia during surgery was made in 1962 by David Cheek, an American gynecologist and hypnotherapist (Cheek, 1962). However, the report was met with skepticism.

“Nobody would believe it,” Hansen told PRF. “But later, anesthesiologists studied this phenomenon and found that, yes, there is intraoperative awareness.”

Intraoperative awareness can be explicit or implicit. Explicit awareness – recalling specific events, such as exact phrases said by a surgeon – is rare, occurring in 0.2% of patients undergoing general anesthesia. Implicit awareness, where patients respond to external stimuli but do not experience any recall of doing so is more common, occurring in about 2% of patients. The current study would provide evidence that a considerable proportion of patients experience perceptions during general anesthesia.

Therapeutic communication – communication that focuses on advancing the physical and emotional well-being of a patient – has been an interest of Hansen’s for decades. “A colleague of mine, an anesthesiologist who led the pain clinic at the university hospital in Munich, first told me about it. Then, in 1984, he took me to the first congress on hypnosis, run by the German Milton Erickson Society for Clinical Hypnosis. I was fascinated.”

Hansen’s experience as a doctor also led him to this line of research. “[A]fter decades of working as a physician, I realized that most of the beneficial things I was able to do for my patients could be traced to a specific principle of talking with people in need,” Hansen wrote in an Opinion for The BMJ that accompanied the release of the study.

“If our basic psychological needs like relationships and belonging, self-esteem, control, and avoiding displeasure are neglected, and then combined with stressors like fear, abandonment, pain, and helplessness in various risk populations – refugees, rape or accident victims, combatants, or patients – there are terrible consequences, such as post-traumatic stress disorder,” he wrote. Because of this, Hansen believes the topics that must be addressed in these populations include company, contact, comfort, confidence, information, control, instructions, respect, safety, and healing. These principles were the basis of the text generated for the current study (see below).

Over the years, several studies have examined the effects of therapeutic suggestions under general anesthesia on a variety of outcomes. A 2016 systematic review and meta-analysis reported that intraoperative suggestions have the potential to reduce the need for medication and enhance recovery (Rosendahl et al., 2016).

“It turns out there are effects of therapeutic intraoperative suggestions on medication use and nausea, but no significant effect on pain,” explained Hansen. But, “the studies included in the meta-analysis were very heterogeneous and old; the most recent study was published in 2001. As an anesthesiologist, I knew there had been a lot of improvements in the field since then. So we decided to do a modern anesthesia study.”

Putting modern methods to the test

The new trial analyzed 385 patients (225 women) age 18 to 70 who underwent various elective surgeries lasting one to three hours under general anesthesia, from five tertiary care hospitals in Germany. These were patients who were at risk of postoperative pain and nausea.

Patients were randomized to an intervention (n = 191) or control group (n = 194). Following anesthetic induction and intubation, the anesthetist placed earphones in the patient’s ears and began playing an audio recording from an MP3 player.

Those in the intervention group were played an audiotape containing therapeutic suggestions played over background music. Hansen and Nina Zech, co-first author along with Hartmuth Nowak, developed and recorded the text based on hypnotherapeutic principles and covered topics such as competence and care of the surgical and anesthesiology team, pain regulation, and anxiety control.

The therapeutic suggestions and background music played for 20 minutes, followed by 10 minutes of silence. The audiotape was played continually during surgery, until the end of the operation, when a different audiotape was played to get patients ready to come out of anesthesia. Patients randomized to the control group were played an audiotape with no auditory output.

For the secondary outcome of postoperative pain, the intervention group showed an average reduction of 25% in their pain scores compared to the control group in the first 24 hours after surgery. The NNT to prevent one patient from having a pain score greater than or equal to 3 on a numerical rating scale was 5.3.

Compared to previous studies of different verbal interventions for postoperative pain relief, the effect sizes in the current trial were larger, which McIsaac and Boet say in their editorial could result from the tightly controlled conditions of the study, compared to more pragmatic trials, which take place under usual conditions where factors such as inclusion and recruitment criteria, follow-up procedures, and other factors are not as tightly controlled.

The underlying mechanisms by which words and music reduced opioid use and pain in the study remain unclear.

The results from the new research may encourage wider use of therapeutic suggestions to decrease opioid use, especially given the opioid crisis. In addition, interestingly, the authors say that their results suggest that surgical teams and anesthetists should be careful about their conversations during surgery and any background noise in the operating room; if positive words are helpful for patients, perhaps negative ones will be harmful.

Hansen is enthusiastic about future applications of intraoperative therapeutic suggestions to a wider group of patients. These suggestions could be used in other settings, such as patients in a coma, during resuscitation, or during intensive or palliative care.

“This [technique] is not limited to unconscious patients. We already use the same text for patients receiving regional or local anesthesia during their surgery,” he said.

“Although multicentre trials often bring a definitive answer to a research question,” wrote McIsaac and Boet in their editorial, “this trial is very much the beginning of an important line of inquiry that may change future practice.”

Lincoln Tracy, PhD, is a researcher and freelance writer based in Melbourne, Australia. Follow him on Twitter @lincolntracy.