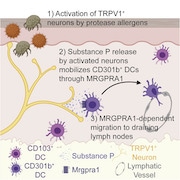 Add allergen detection and the allergic immune response to the growing list of biological functions made possible by interactions between the nervous system and the immune system, according to a new study from investigators led by immunologist Caroline Sokol, Harvard Medical School, Boston, US.

Sokol and colleagues now find that the allergen papain, a cysteine protease enzyme found in papaya fruit, directly activates TRPV1+ sensory neurons in the skin to cause itch and pain. These neurons release the neuropeptide Substance P, which signals to nearby dendritic cells, causing these immune cells to migrate to the lymph nodes and trigger an allergic immune response.

“This paper shows how the nervous system and the immune system can form a complex, system-wide response to allergen exposure in the skin. This interaction causes an immune response and itch sensation to protect the body against a specific allergen invasion,” said Mark Hoon, National Institutes of Health, Bethesda, US. “The paper also highlights that there is something unusual about cutaneous somatosensory neurons compared to most other types of sensory neurons, where in addition to driving sensations like itch, they can also act like endocrine cells to release factors into their local environment,” added Hoon, who studies the molecular and cellular basis of somatosensation but was not part of the study.

The study was published November 17, 2020, in Immunity, along with an accompanying Preview.

Sensory neurons: a way out of the immune dark ages

Two years ago, when Sokol started her research group, she began working on how allergens activate the innate immune system. She focused on dendritic cells (DCs), a type of innate immune cell. DCs reside in the skin, where they hunt for pathogens. Once activated by pathogens, these cells migrate to the draining lymph nodes to drive adaptive immunity by stimulating the differentiation of naïve T cells into T helper-2 (Th2) cells. But despite this understanding of the basic framework for DC detection of pathogens, a mystery remained as far as allergens were concerned.

“The problem was that we had no idea which cells sense allergens; we were in the dark ages here,” Sokol told PRF. “We knew dendritic cells were the primary sensors for viral or bacterial infections, but they don’t get directly activated by allergens. It started to hit me that we were looking at the wrong cell type.

“Around that same time,” Sokol continued, “my son got his first bee sting and developed this big itchy hive. I realized something that neurobiologists had known for ages – that these toxins and allergens could be directly activating sensory neurons to cause itch. That’s what drew me to the nervous system. I thought maybe sensory neurons are detecting allergens and somehow activating dendritic cells.” Here Sokol was referring to previous research from current study co-author Isaac Chiu (Chui et al., 2013PRF news story covering that prior work).

Sokol’s team began by investigating how mice responded behaviorally to papain. Intradermal injection of this allergen caused the animals to immediately scratch and wipe at the injected area, suggesting that sensory neurons had been recruited to drive itch and pain-like behavior, respectively. Interestingly, co-injection of papain with the local anesthetic and lidocaine derivative QX314, which enters neurons via TRPV1 and TRPA1 channels, blocked the scratching and wiping behavior. This suggested to the authors that TPRV1-expressing sensory neurons might be responsible for direct allergen sensing.

Additional evidence implicating sensory neurons in allergen detection came from experiments in which the researchers cultured dorsal root ganglion (DRG) neurons in vitro, and tested whether papain induced calcium currents, a marker of cell activation, in these neurons. Papain caused immediate and robust calcium influx, just seconds after administration. Further experiments showed that approximately 16% of the cultured DRG neurons responded to the allergen, and of these, 68% were TRPV1+. Together, the results showed that a small proportion of DRG neurons responded directly to papain.

The findings also pushed the authors down the trail of TRPV1+ neurons as the most important population of sensory neurons allowing for the direct detection of allergens and ensuing itch response. They used diphtheria toxin to ablate TRPV1+ neurons in the DRG in mice, which resulted in a loss of the itch response and a partial block of the pain response after papain injection.

Identifying a cellular and molecular pathway

“I found this CGRP result very interesting, but it was also slightly confusing that CGRP and Substance P are regulated in an opposite manner,” said Caroline Perner, co-first author on the paper along with Cameron Flayer and Xueping Zhu. Previous literatureprovides “strong evidence that both Substance P and CGRP have consequences on immune cell activation, but now this finding suggests that they could work antagonistically. We are now trying to find out why it might be important to inhibit CGRP release for the immune response.”

To examine the role of Substance P in promoting DC migration, the authors injected Substance P or CGRP into Kaede mice (mice that express a photoconvertible protein to track the movement of cells from the skin) and tracked DC migration. Substance P, but not CGRP, caused robust DC migration to the draining lymph nodes, mimicking the effect of papain. This indicated that Substance P was the signal linking sensory neuron activation to the allergic immune response. But other peptides might also be involved.

“One assumption here is that it’s just Substance P, but Tac1 [the gene that encodes Substance P] can encode other peptides as well as Substance P. These other factors could be important for driving the full allergic immune response,” Hoon told PRF.

A question remained: Did Substance P directly activate DCs? If so, DCs must express Substance P receptors. To find out, Sokol and colleagues turned to ImmGen, an immune gene expression database, and learned that Mrgpra1, a gene that encodes the Substance P receptorMRGPRA, was enriched in DCs. Indeed, in the authors’ own hands, Mrgpra1 was present in DCs that had migrated to the lymph nodes after papain exposure. 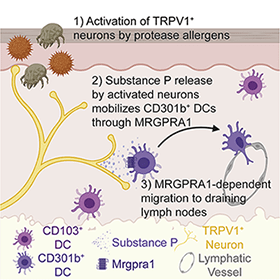 Furthermore, injection of MRGPRA1 agonist into the skin spurred DC migration into the lymph nodes, even in the absence of papain. This effect was lost in mice lacking Mrgpra1, showing that Substance P released from sensory neurons directly promotes DC migration via MRGPRA1.

Taking the next step

In a final experiment, Sokol wanted to know whether TRPV1+ sensory neurons were sufficient for the next step of the allergic immune response – differentiation of Th2 cells – in the lymph nodes, rather than only for DC migration. This indeed was the case, as ablation of TRPV1+ neurons with diphtheria toxin blocked the Th2 cell differentiation in the lymph nodes that papain normally causes.

However, in the absence of papain, while Substance P did cause DC migration to the lymph nodes, it failed to produce Th2 cell differentiation. Sokol highlighted the importance of this finding.

“We can force the dendritic cells to migrate just with Substance P, but this isn’t sufficient to cause a full allergic immune response unless the allergen itself is present. That means there must be other pathways that drive this immune response,” she told PRF.

The researchers also think that their findings have important clinical implications for allergic conditions like eczema (atopic dermatitis).

“There is this concept called atopic march where if you have eczema, you’re more likely to develop other allergies like asthma or peanut sensitization,” said co-first author Flayer. “A mainstay in the treatment of allergy is steroids, which are a sledgehammer to the immune system and don’t specifically target type-2 [adaptive] immunity. Our data suggest that we could specifically target neurons upstream of type-2 immunity to prevent atopic march and itch, leaving the rest of the immune system intact. Indeed, there is early clinical trial data about TRPV1 antagonists relieving eczema symptoms,” said Flayer (Lee et al., 2019).