Clues are emerging to suggest where and how the virus attacks the peripheral nervous system. 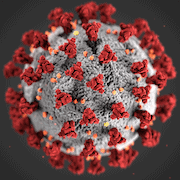 Clues are emerging to suggest where and how the virus attacks the peripheral nervous system.

By now it’s clear: COVID-19, the disease caused by the SARS-CoV-2 virus, includes symptoms that invoke the nervous system in myriad ways – from the acute symptoms of sore throat, cough, joint and muscle pain, and headache to the lasting fatigue and “brain fog” of long COVID, the persistence of symptoms in some people for weeks or months after infection. Now, two papers initially posted as preprints on bioRxiv but now published in PAIN are illuminating how SARS-CoV-2 might interact with peripheral sensory neurons.

In the first paper, published in the November 2020 issue of PAIN, Theodore (Ted) Price and colleagues at the University of Texas, Dallas, US, show that roughly a quarter of neurons from human dorsal root ganglia (DRG) contain angiotensin-converting enzyme 2 (ACE2), the protein widely believed to be the virus’ primary portal for entry to cells. The work shows that SARS-CoV-2 has the potential to infect human sensory neurons, but no direct evidence of that has yet been shown.

In the second study, published October 1 in PAIN, Rajesh Khanna and colleagues at the University of Arizona, Tucson, US, investigate an interaction between the Spike protein of SARS-CoV-2, which the virus uses to enter cells, and neuropilin 1 (NRP1). NRP1, a receptor for the pro-algesic vascular endothelial growth factor-A (VEGF-A), has also recently been implicated as a potential co-factor for viral entry (see Daly et al., 2020Cantuti-Castelvetri et al., 2020). Khanna’s team shows that Spike binds NRP1 and has a paradoxical analgesic effect, dampening nociceptor activity in vitro and blunting pain in a rat model of neuropathic pain.

“It’s beautiful cell biology,” Price said of the Khanna work. “It’s super interesting from the perspective of NRP1 being a potential pain target; no one has ever brought that up before, and it’s a cool mechanism. Now that NRP1 has been identified as a host-entry factor, this is especially important.”

An entry point to sensory neurons?

The hallmark symptoms of COVID-19 include sore throat, headache, cough, and muscle and joint pain, similar to many viral infections. But some patients also report neuropathic pain-like symptoms, and a growing number of people with long COVID are living with ongoing pain and fatigue. Together, the collection of virus-associated maladies struck Price as having something in common: They arise from nociceptor activity. So he decided to go looking for evidence that SARS-CoV-2 might infect nociceptors in humans.

To do that, said first author and postdoctoral fellow Stephanie Shiers, “We thought, let’s look at ACE2, the primary receptor the virus uses to enter and infect cells.” Although previous work had revealed signs of ACE2 expression in human DRG, it lacked the resolution to pinpoint how many or which cells might contain the receptor, because it used bulk rather than single-cell sequencing.

Here, Price, in collaboration with Patrick Dougherty, University of Texas MD Anderson Cancer Center, Houston, US, procured DRG tissue from organ donors or from cancer surgeries in which vertebrae were removed. They then used the RNAscope method of in situ hybridization, which allows single-cell resolution. The team found that roughly one-fifth to a quarter of DRG neurons contained messenger RNA (mRNA) for ACE2, and antibody staining also revealed ACE2 in DRG neurons. Many ACE2 neurons also contained mRNA for calcitonin gene-related peptide (CGRP), the purinergic ion channel P2X3, and for the voltage-gated sodium channel NaV1.8, suggesting the neurons made up a subpopulation of nociceptors.

Notably, ACE2 neurons also contained mRNA for the Mas-related G protein-coupled receptor D (MRGPRD) and for natriuretic polypeptide b (NPPB), a signaling protein implicated in itch. “We know from mice that those neurons should be innervating the skin and the outer layers of your hollow organs, like the lungs,” Price said. “It suggests those neurons could be susceptible to infection by the virus.”

Whether the amount of ACE2 Shiers detected in the human DRG neurons is enough to confer viral infection, or whether ACE2 is trafficked out to nerve endings, remains unclear. “There’s no way to test that right now,” Price said.

But neuronal infection is not required for the virus to do lasting damage to neurons, Price said. In another recent study (Ray et al., 2020), Price and colleagues used RNA sequencing to examine the “interactome” between cells from the lungs of COVID patients and healthy controls, and human DRG neurons. “We found lots of cytokine-cytokine receptor interaction points,” he said, which could allow for COVID-associated cytokines to bind and potentially harm neurons. Many were the same molecules associated with neuropathic pain, Price said.

In her commentary in PAIN, Oaklander pointed out that while C-fibers are likely to mediate multiple COVID-related symptoms, these could arise from the numerous vulnerabilities that nociceptors encounter, from circulating immune factors to elevated levels of the pro-inflammatory angiotensin to hypoxic damage.

Oaklander used an analogy to describe the potential for the virus to damage nerves without infection. “If you see a robber standing outside a bank with a drill, he doesn’t have to get inside before you trigger the alarm.”

Oaklander told PRF there is another possibility to consider: “Could the virus binding at ACE2 then serve as an epitope to trigger an immunologic attack on neurons?” There is precedent for that in other post-viral syndromes, she added, and “from an overview of publications so far on neuropathies arising after COVID-19, most look to be autoimmune. But you can’t prove it until you can do basic science and isolate auto-antibodies.”

Finally, Oaklander made a plea in her commentary and to PRF for clinician-researchers to begin collecting biopsies of C-fibers from patients with COVID-19, particularly those with neuropathic pain symptoms. Price agreed, saying, “It’s the logical next step; that’s where to start.” If Oaklander or other researchers set up a project to obtain such data, he added, “and if somebody wanted to do molecular profiling, we’re set up to do it. There’s nobody doing it yet.” Oaklander has now started seeing COVID patients with small-fiber neuropathy.

The second study, from Khanna and colleagues, was inspired by reports that NRP1 could potentiate viral entry to cells. “That got our wheels turning,” Khanna said. The group had already been studying VEGF-A, a molecule best known for its roles in angiogenesis and axon guidance. In addition, Khanna said, “VEGF has been known for 15 or 20 years to be important in pain.”

But, Khanna said, “the big realization came when, through the literature, we realized that one of the co-receptors for NRP1 was VEGFR2 [VEGF receptor 2]. Well, guess what? The physiological ligand of this receptor is VEGF-A, and that basically let the flood gates open for us.” Khanna’s team had been working with NRP1, a protein that had never before been implicated in nociceptive signaling. Once they realized it bound VEGF-A – and, apparently, SARS-CoV-2 – the researchers wanted to test the effects of the virus’ Spike protein at NRP1 in neurons.

First author Aubin Moutal first plated dissociated rat DRG neurons on micro-electrode arrays. When the researchers applied VEGF-A, the neurons increased their spontaneous firing, which was blocked by applying either the NRP1 inhibitor EG00229 or by the receptor-binding domain of the SARS-CoV-2 Spike protein.

To explain how VEGF-A increased neural activity, the researchers then measured ion currents from DRG neurons. VEGF-A application caused a near doubling in the amplitude of excitatory currents through both voltage-gated sodium and voltage-gated calcium channels; both increases were blocked by Spike protein. The biophysical properties of the channels, including activation and inactivation kinetics, appeared unchanged.

Recordings of spontaneous excitatory postsynaptic currents (sEPSCs) from spinal cord slices showed that their frequency increased by about three-and-a-half times with application of VEGF-A. In contrast, their amplitude was unchanged, suggesting that VEGF-A works at a presynaptic site. Spike or EG00229 attenuated the increase in sEPSCs by about half, but had no effect when applied on their own.

An effect on pain?

The researchers next wanted to determine whether VEGF-A caused pain-related behaviors, and what effect Spike had on them. They injected the paws of male and female rats with VEGF-A, which led to reduced mechanical withdrawal thresholds and reduced withdrawal times from a hot plate, confirming a pro-nociceptive role for VEGF-A in the animals. Co-application of Spike or EG00229 with VEGF-A somewhat reduced the allodynia and thermal hypersensitivity but had no effect when applied alone.

The findings implicate NRP1 as a potential novel target for neuropathic pain therapeutics. Small molecules and antibodies that block NRP1 at the same site as VEGF-A and Spike are under development as cancer drugs to inhibit angiogenesis (e.g., see Powell et al., 2018).

Virologist Giuseppe Balistreri, University of Helsinki, Finland, who authored the Science mouse study on NRP1 and SARS-CoV-2, said of the Khanna study, “In their experiments, the effect of the Spike on NRP is quite strong; the neurons were activated when they touched the Spike of the virus through NRP. And because NRP is a co-receptor of VEGF, and that’s involved in pain regulation, Spike binding sequestered away the pain, a fact they showed in the paper.”

In a more controversial and purely speculative hypothesis, Khanna suggests that Spike binding at NRP1 could potentially silence nociceptors early in a SARS-CoV-2 infection, perhaps even masking early symptoms of pain or cough and contributing to the virus’ now-infamous asymptomatic spread.

Khanna postulated, “What if, in the beginning stage of this disease, your pain is suppressed? What if you have pain relief such that you feel fine, but you’re walking around with virus on board?”

While Balistreri agrees that the idea is purely conjecture and untested, from his virologist perspective, he could not rule it out. “Maybe the virus has evolved a further advantage in that, if it decreases pain, that would allow you to not feel too sick too soon,” perhaps contributing to asymptomatic spread. “I agree they didn’t prove it,” Balistreri said, but in the midst of a global pandemic with so little known about the novel coronavirus, researchers should consider all possible angles. “If I’m wrong in saying this virus might have an analgesic effect,” the consequences are limited, he said. “But if I’m right, then someone with the expertise to intervene could be useful. If I’m right, that could help save or improve lives.”

Whether SARS-CoV-2 can dampen pain in humans remains to be tested, though, Balistreri said. “They used a piece of the virus, in a much bigger dose than you would have with a natural infection, tested in a lab system and in a rat, not a human.”

Whether or not NRP1 binding by the virus has any effect on COVID symptoms, Khanna and his team are pursuing the receptor’s potential as a therapeutic target for pain. In a different study, they screened half a million existing small molecules and natural products to identify six compounds that bound NRP1 in silico and interfered with VEGF-A binding and phosphorylation, a marker of ligand-receptor engagement. The work was posted as a bioRxiv preprint on September 23, 2020 (Perez-Miller et al., 2020).

“It’s not too deep a groove into which the compounds dock. They fit into it beautifully,” Khanna said. “The compounds bind in a manner almost indistinguishable from VEGF and Spike. So it’s beyond our wildest dreams” when it comes to drug development.

The two new studies provide the first look at how SARS-CoV-2 could interact directly with sensory neurons, or even infect them, if not definitively showing that they do so. But even if the virus is only a robber with a drill outside the bank, it appears capable of causing plenty of disruption to neurons, and plenty of resulting symptoms.