The Culture of Research: “A Shocking Portrait” Calls for Immediate Change

A Wellcome Trust study documents a plethora of widespread issues, including career insecurity, bullying and harassment, sexism and mental health issues. Pain investigators who spoke to PRF said these problems apply to the pain research environment too. 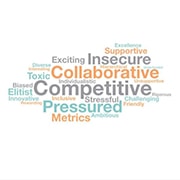 A Wellcome Trust study documents a plethora of widespread issues, including career insecurity, bullying and harassment, sexism and mental health issues. Pain investigators who spoke to PRF said these problems apply to the pain research environment too.

What is it like to be an academic researcher today, according to researchers themselves?

The Wellcome Trust, a huge funder of biomedical research based in London, UK, has now weighed in on this question by releasing “What Researchers Think About the Culture They Work In.” This is an ambitious 18-month project to gauge the current state of research culture as part of its Reimagine Research initiative – and the results aren’t pretty.

From unhealthy competition to bullying and harassment, from mental health issues to poor decisions by management, the report describes a publish-or-perish research environment that values the wrong things and is in need of immediate change.

“These results paint a shocking portrait of the research environment – and one we must all help change,” said Jeremy Farrar, director of Wellcome, in the executive summary of the new findings. “The pressures of working in research must be recognised and acted upon by all, from funders, to leaders of research and to heads of universities and institutions. As a funder, we understand that our own approach has played a role. We’re committed to changing this, to foster a creative, supportive, and inclusive research environment.”

While the project was not focused on the pain field per se, pain investigators told PRF that the results apply to pain research, too.

“Unfortunately, I don’t think there is anything special or unique about pain research that insulates us from these issues,” said Christine Chambers, a senior clinical psychologist and pediatric pain researcher at Dalhousie University, Halifax, Canada. “We face and need to address a lot of these same challenges in order to retain the kind of talented researchers who will make tomorrow’s important discoveries.”

Ben Bleasdale, a senior policy and advocacy advisor at Wellcome who collaborated on the study, said the organization was inspired to take on the new work after undergoing a “moment of reflection” after implementing new zero tolerance policies around bullying and harassment.

“We realized it was an important signal to send out to the sector – it made a difference,” he said. “But people don’t go into research to bully others. So we wondered if, perhaps, Wellcome, and the way we and other funders operated, was somehow creating a situation where it was easier to get ahead being unkind rather than kind. It was something we thought was important to investigate.”

So Wellcome commissioned Shift Learning, a market research agency, to help run a survey of more than 4,000 researchers, at all career levels and primarily based in academia/universities in the UK but also in other regions. This online survey of investigators in biomedical science, biological sciences, medicine, social science/psychology, and other fields built upon in-depth interviews with individual researchers as well as workshops focused on how to improve research culture.

The survey found that the vast majority of respondents agreed they were proud to work in the research community. But, that said, less than one-third felt secure in pursuing a research career. Forty-three percent reported experiencing bullying or harassment on the job, more than 50% had previously sought or were seeking professional help for depression or anxiety, and 78% reported that high levels of competition were leading to an overly aggressive work environment.

Among the many additional problems survey respondents pointed to were unwise decisions by senior management at their institutions; a lack of managerial training in those with managerial roles; an absence of balance in the many roles – research, teaching, administrative – investigators are expected to assume during their careers; pressure felt among younger researchers to produce particular results; and issues with others taking credit for a person’s own work.

In terms of what it all means for the future of the research enterprise, survey respondents said that the quality of research is at risk, with negative effects on society as well. Creativity and collaboration are also threatened. Perhaps most of all, the poor research culture means that many talented investigators will end up leaving the field.

How did we get here?

What accounts for these findings? According to Amanda Williams, a senior researcher and clinical psychologist who studies pain at University College London, UK, money is a key factor. She said things were not as bad when she started out nearly two decades ago.

“It sometimes seems if you can’t show immediate impact and quantify your research in terms of pounds or dollars, it’s devalued,” she said. “I feel like it was easier to get research grants earlier in my career. People could take a bit more risk in what they wanted to pursue and still hope to get money for more thoughtful or theoretical work. That doesn’t seem to be the case anymore.”

Williams said this can be demoralizing for many researchers, who feel they are working twice as hard to get half as much funding. This makes it more challenging for them to amass the high-profile publications demanded by academia’s publish-or-perish ethos, also pointed to as a key problem by the survey respondents.

“If someone is only valued by the number of high-impact papers they publish each year, if you have this kind of competition required to get ahead, the ones who are struggling to get there are going to feel bad about it, and may decide to move away from the kind of work they are really passionate about,” she said.

Michael Gold, a senior basic science pain researcher at the University of Pittsburgh, US, agreed. He added that scientists who pursue an innovative theoretical research track or provide some of the basic science work that might one day fuel medical discovery isn’t well supported by research institutions, either.

“There are a lot of issues surrounding what is incentivized in the research even beyond grants,” he said. “What’s more frustrating is that there is widespread agreement that this is a problem. We know this kind of work is important, yet funding agencies and chairs who are making hires continue to make their selections based on those same problematic criteria. Sometimes I feel it’s a bit like climate change: The problem just feels too big for anyone to tackle on their own, so we say it’s an issue in one breath and then continue doing the same thing we’ve always done with the next.”

Bleasdale said Wellcome is paying close attention to these concerns, as he believes they may be at the root of other issues uncovered by the study.

“These high levels of almost hyper-competition present in the system mean that collegiality has just been whittled down to the bare bones,” he said. “The senior researchers we spoke with talked about a time when they felt like their colleagues were on their side and you weren’t constantly competing with everyone around you just to survive. This could be one reason we do see reports of such aggressive working environments and long hours, and it has us thinking about what we could do to help restore that more collegial workplace.”

Chambers recalled that, early in her career, bullying and sexual harassment were something researchers whispered about in the washroom or by the water cooler, but never reported to their supervisors.

“Unfortunately, I think for many women in science, we accepted that it was just the way it was,” she said. “But with the #MeToo movement, the world has shifted and, instead of just accepting these things, everyone is appreciating that enough is enough, and it’s time to implement measures that address these matters in a more systematic way.”

Nadia Soliman, a PhD candidate in the pain field at Imperial College London, UK, said such policies need to promote diversity as well. Like Chambers, she sees more conversations happening and more policies being considered. But, she cautioned, that doesn’t mean much if the policies aren’t consistently enforced.

“In my opinion, there’s a large disconnect between a lot of good policies that are already in place and the freedom senior academics are given in how they run their projects and labs,” she said. “Too often the policies aren’t enforced, for many reasons ranging from ineffective communication to lack of ramifications. And that means that women and other minorities, who are already at a disadvantage, can’t benefit from the policies there to help them. That often results in them having to make a choice to leave.”

Soliman added that it would be inspiring to see more women and people of color in leadership positions in the research world. Williams wholeheartedly agreed.

“Seeing more diversity in who is doing plenary sessions at major conferences and who is taking on leadership roles in major institutions – this could make a big difference, I think,” she said. “Representation helps a great deal. Yet, too often, there aren’t clear policies on how to effectively do this, and so we slip back into the old thing of mostly white, mostly male, and mostly Western country selections.”

Gold said the Society for Neuroscience (SfN) is a good example of an organization that is putting strong diversity policies in place – and making sure they are actually applied.

“SfN has been very aggressive, on all fronts, about integrating panels and assisting women in taking on leadership roles,” he said. “It’s had real impact, so that we now see the kind of diversity that actually exists in science represented at these meetings and on working groups.”

With the new results in hand, Bleasdale said he and his colleagues at Wellcome will be hosting a series of town hall events to further engage with the research community. The goal is to better understand how to best address the issues the report uncovered.

“We are actively thinking about how to shift these negative experiences,” he said. “That said, there is no easy one-size-fits-all silver bullet solution we can roll out. That’s why we want to talk to people at the heart of the research process and help build a system that can accommodate different people, the different ways they work, the different contributions they make, and the different support they require to be at their best.”

Soliman said she would like to see more researchers, from students to well-established principal investigators, advocate for a more positive research culture to encourage policies that not only support good research but also the researchers themselves.

“We do have agency, and we should do what we can to improve the culture, within reason,” she said. “One place to start is for all of us to be more accountable, as a whole, to make sure we do more than just talk about change but see good policies put in place to address many of the barriers researchers currently face.”

Chambers said that best practices do exist, and it is within the research community’s power to investigate the kinds of policies that would best promote collegiality, equity, diversity, and inclusion in each research lab and institution. She added that she loves Wellcome’s idea of “reimagining research,” as it is becoming more and more apparent that, right now, success in science is only manageable for certain groups of people.

“Simply put, I think we need to hold people more accountable for their behaviors so we can work toward a kinder, gentler science environment,” she said. “Working towards that more collaborative, more inclusive world is going to be increasingly important, as the diversity and creativity it fosters is going to be what really drives innovation in the future.”

Image credit: Wellcome, What Researchers Think About The Culture They Work In.