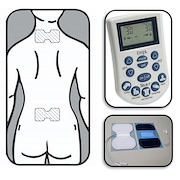 Transcutaneous electrical nerve stimulation (TENS) has been used to treat various forms of chronic pain for decades, yet studies investigating the benefits of this intervention for pain have failed to show unequivocal results. Now, a large, randomized, blinded, placebo-controlled trial shows that nearly half of study participants with fibromyalgia (FM) experienced at least a 30% decrease in pain during rest and movement, or a 20% decrease in fatigue, a debilitating symptom experienced by the vast majority of people with FM.

Claudia Sommer, a pain researcher and clinician at the University of Würzburg, Germany, who was not involved in the trial, called it “a well-done, randomized controlled study. I was happy to see that TENS has a positive result in treating this difficult type of pain.”

Kathleen Sluka, who has long studied TENS at the University of Iowa, Iowa City, US, led the trial together with rheumatologist Leslie Crofford, Vanderbilt University, Nashville, US. The results appeared online November 18, 2019, in Arthritis & Rheumatology.

TENS is a non-invasive, non-drug intervention in which electrical current is delivered through the skin. Previous reviews of studies of TENS for FM have shown mixed results, Sluka said, because “we didn’t know what the appropriate parameters were.” For example, studies varied in what frequency TENS they used, and for how long and how often (Johnson et al., 2017Sluka et al., 2013). But the past 20 years of research by Sluka and others have revealed important details about how TENS should be applied to achieve analgesia (Vance et al., 2014).

“Based on all these years of TENS research, we specifically designed this study to address all the weaknesses of all the previous studies,” Sluka said. That included selecting a pain condition likely to improve with TENS.

“The reason we chose to test it in fibromyalgia was that we know the underlying mechanisms of FM are associated with central excitability and loss of inhibition in the central nervous system,” Sluka said (Sluka and Clauw, 2016). “TENS specifically increases endogenous central inhibition through opioid and serotonin systems, and decreases central excitability, including central sensitization, which has been measured in animal studies. So we matched the treatment to the mechanism, which we think is really important.”

The trial included 301 women with a diagnosis of FM who were taking stable medication. Subjects were randomly assigned to one of three groups: active-TENS, no-TENS (treatment as usual including exercise), and placebo-TENS. TENS was applied to the low and mid-back at the highest tolerable intensity, at a mix of high and low frequencies.

“You have to have sufficient intensity to get analgesia; it needs to be as strong as possible without being painful. They didn’t know that in the older studies,” according to Sluka.

For the placebo-TENS arm, the investigators used a specialized TENS unit programmed to deliver a mild yet detectable current without therapeutic activity, which provided strong blinding of the placebo. Seventy percent of participants in the active-TENS group guessed they were getting active treatment, but whether they guessed or not did not impact the treatment’s effectiveness.

The researchers assessed subjects for pain and fatigue before any treatment on the first study visit, and again on the second visit a week later. On the second visit, subjects also underwent testing while receiving TENS, both at rest and during movement (the primary outcome of the study). Function and movement pain were tested using the Six-Minute Walk Test (6MWT), in which subjects walk as far as they can in six minutes, and the Five-Time-Sit-to-Stand test (5TSTS), which measures the time to go from sitting in a chair to standing five times.

Then, subjects in the active-TENS and placebo-TENS groups were sent home for one month with their respective TENS units and instructed to use them for at least two hours per day during physical activity, whatever form that might take. On a third visit, subjects were again assessed for pain and fatigue at rest before TENS, and during the 6MWT and 5TSTS while wearing the TENS unit.

Researchers performing testing were blinded to which TENS treatment the subjects were receiving, including the no-TENS group, because participants wore an inactive unit during testing.

Sluka said it was imperative to assess pain and fatigue while subjects were receiving TENS, much like testing a drug’s effects.

“It’s important that we are testing it while it’s in its active phase,” Sluka said, but previous studies had mostly measured outcomes days or even weeks after TENS treatment. “We wouldn’t do that with a drug ─ come back a month later and say, ‘How’s your pain?’ It’s the same idea: You only get pain relief from morphine when it’s on board.” Because studies in animals have shown that TENS works by activating opioid and other endogenous receptors, Sluka said the intervention is actually analogous to a pharmacological treatment.

Based on preclinical studies, Sommer said, “we would think that TENS should work marvelously, but until now it has not been shown. So this is a very good example that you need the right set-up ─ like this one using TENS with movement ─ to see the effect.”

The results are in

With this improved clinical trial design, it was time to put TENS to the test. Subjects receiving active-TENS saw a greater reduction in movement-evoked pain between the pre-TENS assessment on visit two and during TENS testing on visit three ─ an average reduction of 1.8 points on an 11-point scale ─ compared to those in placebo-TENS, who had a 0.8-point reduction, or no-TENS, where there was virtually no improvement. Results were similar for resting pain and fatigue.

In a final, unblinded phase, all participants were sent home with an active TENS unit and assessed a month later. All three groups improved significantly on resting and movement-evoked pain scores following the final active-TENS period compared to their third visit.

Sluka said that the responder rates for active-TENS were comparable to those for drugs approved for FM. “We see it works for about half the population with 30% relief. That’s substantial; nothing works for everyone.”

What accounts for the positive results of the current trial, especially in comparison to the mixed findings from previous work?

“I admire the design of the study,” Sommer said. “It’s a really long-term study, and the fact that they got so many participants allowed them, in the end, to get really robust data. This is the way more studies should be done ─ with this long-term commitment.”

It’s also possible that exercise contributed to the success of the TENS treatment. Paradoxically, gentle movement is the most effective treatment for FM (see, e.g., Sosa-Reina et al., 2017), even though movement can be a trigger for pain.

“A major problem for fibromyalgia patients is that they don’t move enough,” said Sommer. “They come into this downward spiral where movement induces pain, their fitness goes down, and then even minor movement induces pain. So this is quite clever to offer the therapy while patients are moving, and they have to move to get the therapy, which is an incentive. And then they have this positive experience that they can move and the pain does not get worse, because they can do something against it.” Sommer suggested that TENS might work best when integrated with physical therapy.

No TENS-related major adverse events occurred in the study; minor adverse reactions were pain or skin irritation at the stimulation site. With that low risk combined with the treatment’s newly demonstrated effectiveness, Sluka says, “Why not give it a shot? It’s inexpensive, with minimal side effects, so why not try it as first-line treatment?”

When considering recent systematic reviews of trials of TENS for FM, Sommer said that “the results were overall quite depressing, because it could not be shown that TENS really worked, so it couldn’t be recommended with high-quality evidence.” The new study provides that evidence, but Sommer said that some patients might find this intervention a tall order.

“You need very motivated patients, because they did quite a lot” of activity for the study, Sommer said. She suggested that follow-up studies might test whether TENS would be effective if used for less than two hours per day or every other day. In any event, she said, “TENS could have a really good position in the overall multidisciplinary treatment of fibromyalgia.”