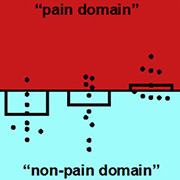 Pain is a complex experience that differs from person to person, which makes it challenging to measure objectively in humans. It’s even more difficult to do so in rodents, considering they are nonverbal and can’t provide self-reports like people can. Consequently, pain researchers have relied on behavioral assays that heavily depend on how the experimenter judges an animal’s behavior.

Now, new research led by Wenqin Luo, University of Pennsylvania, Philadelphia, US, establishes a “mouse pain scale” by analyzing behaviors on a sub-second level through use of high-speed videography, statistical modeling, and machine learning. Using this scale, the investigators were able to determine the likelihood that three von Frey filaments typically used in the field would produce low-pain-like, boundary pain-like, or high pain-like behavior—a real-world proof of principle of their new scale.

“In general I thought this study was pretty awesome because the authors were looking in greater detail at the withdrawal responses that people have not paid much attention to, even though researchers have been using these withdrawal assays for a really long time,” said Jeffrey Mogil, McGill University, Montreal, Canada, who was not involved with the research.

“I really appreciate the fact that they looked at strain and sex differences, as this is pretty rare,” he continued. “It is also really impressive that they went beyond just developing the method but also validated their findings with the von Frey and optogenetic experiments, which could have been separate publications on their own,” according to Mogil.

High-speed videography: taking a methodological page from the zebrafish book

When co-first author Ishmail Abdus-Saboor started his postdoc (he is now a faculty member at the University of Pennsylvania) in Wenqin Luo’s laboratory in 2014, he was new to the field of pain neuroscience. He started to investigate pain behavioral responses in rodents, but soon realized that simply looking at the withdrawal response to an evoked stimulus was not enough, as this approach lacks resolution—meaning it does not take into account the miniature-scale movements characteristic of that response. Meanwhile, other typical behavioral assays in mice have their own limitations.

The Luo lab has joint meetings with the lab of Michael Granato, also at the University of Pennsylvania, which was taking advantage of high-speed videography to investigate zebrafish motor behaviors. So an idea took shape to employ that technique, which can identify sub-second behavioral features, in mice to quantify pain-related behavior in a more objective manner.

As a first step, the authors used high-speed videography while applying four stimuli to the mouse hindpaw, ranging from innocuous (cotton swab or dynamic brush) to noxious (light pinprick or heavy pinprick). They performed these experiments in inbred C57 or outbred CD1 male and female mice.

“When I first started in the lab in 2015, I had extensive rat behavior experience as it related to the migraine field,” said Nathan Fried, co-first study author who is now a professor at Rutgers University, Camden, US. “So Ishmail and I sat down and classified any type of body movements we were able to observe in response to stimuli to the hindpaw. Afterwards, we tried to resolve it into something that would allow us to statistically differentiate the painful from the non-painful stimulus,” continued Fried.

The authors found that the mice showed different response times to the various stimuli, with the animals taking longer to respond to the innocuous stimuli as compared to the noxious stimuli. The researchers also saw that the cotton swab and dynamic brush almost exclusively evoked paw and head movements, whereas heavy pinprick also caused the animals to jump, shake their paw, or squint.

The paw and head movements were most closely related to the stimulus onset, and so the authors decided to focus on that, reasoning that such movements were most likely to reflect the sensation evoked by the stimulus. So the investigators next quantified the paw height (the maximum height of the paw after paw lifting) and the velocity of the withdrawal. Heavy pinprick, the more painful stimulus, evoked the greatest height and withdrawal velocity, whereas these measures were lowest with the cotton swab, in both sexes and genotypes.

Narrowing down to pain-like behaviors

But the authors found that three parameters—paw lift height, paw lift velocity, and pain score (the last a composite measurement of orbital tightening, jumping, paw shaking, and paw guarding)—tended to increase as the intensity of the stimulus increased. Thus, these three parameters were thought to account for the majority of the system’s variance and would be the most useful in determining a noxious versus innocuous stimulus. Importantly, those three parameters encompassed reflexive and affective components of pain.

Because the three parameters are measured in different dimensions, the authors next used a statistical procedure called principal component analysis (PCA) to determine what’s known as a principal component (PC) score. Here, a large set of variables is reduced to a smaller set of variables, resulting in the PC score. The group performed this analysis for each sex and genotype separately, and then together.

The PC scores were positively correlated with increasing stimulus intensity, which meant the PC score could be used to map a mouse’s pain state and pain intensity. The authors say that one could consider this a “mouse pain scale,” a single index where a score of 0 serves as a threshold separating the non-pain versus pain state, with positive values signifying greater pain.

The likelihood that a behavior is pain-like: machine learning to the rescue

To dig even further, the researchers used machine learning to ask if one could predict the probability that a particular withdrawal behavior was pain-like. For this purpose, the investigators used the cotton swab and heavy pinprick PC scores (non-pain-like and pain-like, respectively) to train a support vector machine (SVM), a machine learning algorithm, to classify behaviors as pain-like or non-pain like.

Together, these experiments show that the author’s machine learning approach fits in well with the pain field’s current knowledge that strain and sex play important roles in determining pain sensation, and is able to take those into account and produce reliable predictions. 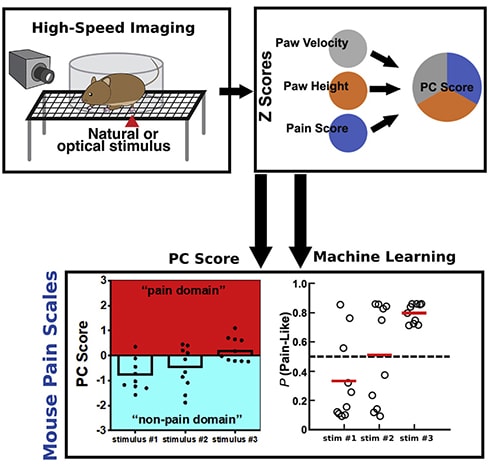 “The results are pretty scary,” Mogil told PRF, “because if they are to be taken seriously, then the 0.6 gram von Frey fiber is not painful, the 1.4 gram von Frey fiber is only borderline painful, and the average 50 percent withdrawal threshold, depending on strain and sex, is between 0.4 and 1.0 grams. Everybody treats these withdrawal thresholds as pain thresholds; however, this paper suggests that this is in fact not painful, and thus our baselines are not really baselines in the von Frey field, which seriously complicates the interpretation of an entire literature,” Mogil said.

Interestingly, the researchers say that the findings are in line with recent animal experiments in which the mechanosensitive ion channel Piezo2 was ablated.

“I was surprised how well this data matched data from recent Piezo2 studies, which suggested that the threshold between painful and non-painful touch is approximately 1.5 to 3.0 g,” Luo said (Murthy et al., 2018, and Szczot el al., 2018).

An optogenetic proof of principle

Optogenetic activation of TRPV1-expressing nociceptors produced a withdrawal reflex 100 percent of the time, with a positive PC score and a high probability of the behavior being pain-like. Consistent with these results, administration of an analgesic cocktail including meloxicam (an NSAID) and buprenorphine reversed both the PC score and pain-like probability without decreasing the percentage of withdrawals to the stimulus.

Meanwhile, although activation of Mrgprd non-peptidergic nociceptors led to a withdrawal reflex in 91 percent of mice, PC scores were negative, and the SVM predicted a low probability that these withdrawal responses were pain-like. The authors say that these results are consistent with previous optogenetic place preference studies, where no place aversion was observed after activation of Mrgprd fibers. They are also in line with human studies where baseline injection of an Mrgprd agonist elicits a tingling but not a painful sensation.

Looking at the Mrgprd fibers a bit further, the group saw that optogenetic activation in animals injected with the inflammatory compound complete Freund’s adjuvant (CFA) elicited a likelihood of a withdrawal response similar to that of controls. However, the PC score was now increased, as was the probability that the response was pain-like; this was reversed by the analgesic cocktail.

All in all, the new work shows the capability of the mouse pain scale to assess withdrawal behavior at a new level of detail, with potential benefits for translation.

“I hope that this will help increase the success rate of new pain treatments and get them to patients quicker, as it takes the predominant withdrawal behavior assays in the preclinical literature and improves them,” said Fried.

In terms of future research, the use of additional mouse strains, and even rats, will further the field’s assessment of pain-like and non-pain-like behavior in laboratory animals.

Challenges ahead include decreasing the costs of the method so that other researchers can put it to work, and to make it as easy to use as possible. Abdus-Saboor’s laboratory is now investigating ways to automate the scoring of features such as paw movement and facial grimace to achieve this and reduce human error.

Meanwhile, Fried’s laboratory is taking what he learned in the current study in mice into fruit flies, to improve the use of Drosophila as a model system for chronic pain research. Finally, Luo said she is using the method in her lab now to understand the role of low-threshold A-beta mechanoreceptors in chronic pain.

Francie Moehring, PhD, is a postdoctoral research fellow at the Medical College of Wisconsin, Milwaukee, US.