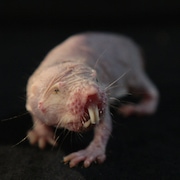 The naked mole rat—unsightly in appearance, unconventional in its habitat, and unusual in its physiology—has been a boon to pain researchers, who have spent the past decade investigating the animal’s insensitivity to certain forms of pain. Now, a new study extends these studies to other African rodent species related to the naked mole rat, and identifies four additional instances of pain insensitivity along with some novel underlying molecular causes.

An international collaboration led by Gary Lewin, Max Delbrück Center for Molecular Medicine, Berlin, Germany, working with African researchers at the University of Pretoria, Republic of South Africa, and scientists in Morogoro and Dar es Salaam, Tanzania, studied nine rodent species, including the naked mole rat, with diverse habitats ranging from the Horn of Africa to the Highveld of South Africa. They discovered that three of the species, apart from the naked mole rat, displayed pain insensitivity, two of which displayed no pain behavior in response to capsaicin or low pH and one (the Highveld mole rat) that was completely insensitive to allyl isothiocyanate (AITC), the substance that gives mustard and wasabi their pungent taste.

“By studying diverse species that have evolved in different environments, one can learn about adaptations in pain processing to these environments and hypothesize about why certain species evolve resistance to different noxious chemicals,” said Ewan St. John Smith, University of Cambridge, UK who studies pain processing in naked mole rats but was not involved in the new research. “This study nicely demonstrates what’s there to be found if you look for it, and in the same way that we can understand more about pain by studying rare genetic variations in humans, we can also discover a lot by understanding the basis of unusual pain behaviors in animals,” Smith told PRF.

The findings were published May 31 in Science.

Lewin has been at the forefront of studying naked mole rats and their insensitivity to various forms of pain for more than a decade (see related PRF stories here and here). The naked mole rat’s extreme habitat of crowded subterranean burrows, where hundreds of animals produce levels of carbon dioxide (CO2), particularly in nesting areas, that would be noxious to other rodents, is thought to explain its insensitivity to acid-induced pain. Such high levels of CO2 likely produce an acidic environment in the mole rats’ tissues, which in normal circumstances would be painful.

Co-first authors Ole Eigenbrod and Karlien Debus, along with colleagues, began by exposing the different species to each of three noxious substances: capsaicin, hydrochloric acid (HCl), and AITC, via hind paw injection. Then they compared pain-like behaviors such as paw licking or flinching to those of mice that served as a control.

Eigenbrod, a bioinformatician, then conducted a large RNA sequencing analysis using spinal cord and dorsal root ganglia samples from each of the species. Initial analyses indicated that all species had broadly similar expression of markers of sensory neurons; similar levels of messenger RNA transcripts for TRPV1, the ion channel that responds to capsaicin; as well as for TRPA1, which responds to AITC. This suggested that the pain insensitivities to capsaicin and AITC observed in the various species were not due to the absence of transcripts that encode ion channels activated by these noxious substances.

As TRPV1 expression in the capsaicin-insensitive Natal mole rat is not different from capsaicin-sensitive species such as the mouse, the researchers examined the functional capacity of the channel by overexpressing it in a human embryonic kidney 293 (HEK293) cell line and measuring the concentrations of capsaicin required to activate it. With Natal mole rat TRPV1, the concentration of capsaicin required to activate the channel, as well as the time course of activation, was not different compared to mouse TRPV1. This suggested that differences in TRPV1 channel function do not underlie capsaicin insensitivity in the Natal mole rat.

“We do not know why the Natal mole rat does not respond to capsaicin. Similar to the naked mole rat, it has functional TRPV1 receptors, and the neurons respond to capsaicin. However, we know from our previous work that in the naked mole rat it’s a central connectivity issue [an unusual pattern of synaptic connections involving capsaicin-sensitive neurons in the spinal cord] that underlies capsaicin insensitivity, but whether this is the case for the Natal mole rat, we just don’t know as of yet,” Lewin told PRF.

Variations in Nav1.7, a voltage-gated sodium channel, have previously been reported in the naked mole rat, whereby acidic protons block this channel, rendering the animal insensitive to acid-induced pain (Smith et al., 2011). The researchers observed the same Nav1.7 variation in the Cape mole rat in the present study, suggesting a similar cause of acid insensitivity in this species. However, the East African root rat did not have this Nav1.7 variation, suggesting another mechanism for acid insensitivity. Overall, what underlies acid insensitivity in rodents is likely to be complex and diverse.

“We have to bear in mind that acid, unlike capsaicin, modulates so many different ion channels and receptors, making it pretty complicated to work out exactly what is going on,” according to Smith.

Sensitivity to AITC is an ancient, evolutionarily conserved trait observed in all animals tested for it to date. Remarkably, the Highveld mole rat displayed a complete lack of sensitivity to AITC in the current study. TRPA1 is the ion channel responsible for the painful response to AITC, and the researchers were interested to see if this channel was functional in these animals. Using calcium imaging (a surrogate marker of cellular activity) in HEK293 cells engineered to overexpress TRPA1, they observed that the level of AITC required to activate Highveld mole rat TRPA1 was 10-fold higher than that required for mouse TRPA1.

The RNA sequencing data from the Highveld mole rat indicated that only one transcript was significantly upregulated compared to all the other species—one that encodes the sodium leak channel, NALCN. In the context of pain, little is known about NALCN but, as Lewin explained, “every neuron has both potassium and sodium leak channels which act in opposition to each other to help regulate membrane potential. So if one is dramatically upregulated compared to the other, it can skew normal action potential propagation.”

By expressing Highveld mole rat NALCN and TRPA1 in HEK293 cells, the researchers demonstrated that the cells had very depolarized resting membrane potentials, which would prevent action potential firing by promoting inactivation of voltage-gated sodium channels. All of this could dampen excitation downstream of TRPA1 activation by AITC in the Highveld mole rat. Further, the antihypertensive drug verapamil happens to block NALCN, and when the team administered it to Highveld mole rats prior to AITC, they observed robust pain behaviors in response to the latter, providing further evidence for the critical role of NALCN in this species’ insensitivity to AITC.

According to Lewin, “a process whereby we could have more trafficking of these NALCN channels to the cell membrane to shut down nociceptors would be a very effective way of alleviating pain.”

The new work shows the value of studying unusual animals and their environments, although in the case of mole rats this is not practical for every lab because of the difficulty in sourcing these animals.

“The really nice part about this study is that it starts with the behavioral experiments, and then we do candidate screening with methods producing large and rich datasets to identify promising targets, and then we eventually go back to the animals to validate these targets behaviorally and pharmacologically,” said Eigenbrod.