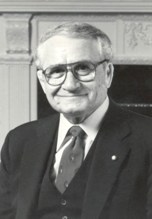 John and Emma Bonica both died this summer; they were inseparable for their 52 years of wonderful marriage. Their lives together produced a loving and caring family and permitted John to establish pain manage­ment and research as worthy endeavors. They are mourned not only by family and friends but also by pain clinicians, teachers and researchers throughout the world. John Bonica was the guiding hand behind the formation of the International Association for the Study of Pain. The facts of his life do not begin to reveal the impact that he had upon anesthesiology and the disciplines of pain research and management, but they are an interesting window into his life’s work.

He was born on the small island of Filicudi, near Sicily. John described a peaceful and happy early child­hood, but his family emigrated to the United States when he was eleven. Life was not easy for a boy who spoke no English when he arrived in New York City; it got even worse when his father died 4 years later. John became the principal wage earner for his family at a young age; he sold newspapers and produce and did odd jobs. He had a dream of becoming a physician. In high school he took up wrestling; when he graduated, he turned professional and worked his way through college and then medical school as a professional wrestler. John graduated from Marquette University School of Medicine in 1942 and shortly thereafter married Emma Baldetti, whom he had courted for 6 years. Emma had been born in New Haven, Connecticut, of a Venetian mother and Anconian father. She learned to speak not only English but also the rare and beautiful Venetian dialect. This was a wonderful mar­riage that produced three daughters and one son: John was devoted to all of them.

John did his internship and then residency in Anes­thesiology at St. Vincent’s Hospital in New York City and then entered the United States Army in 1944. He was sent to Madigan Army Hospital in Fort Lewis, Washington, and promptly became Chief of Anesthesi­ology. He supplemented his income by wrestling as “The Masked Marvel”, for the Army thought wrestling to be conduct unbecoming of an officer. He taught himself regional anesthesiologic techniques, provided surgical anesthesia, taught junior physicians, and be­came appalled at the pain and suffering endured by soldiers who had been wounded in war. His over­whelming concern about pain management began at this time. When his wife had a life-threatening experi­ence with open drop anesthesia for the birth of their first child, John developed a new mission – the intro­duction of regional anesthetic techniques for obstetri­cal anesthesia. Emma was one of the first women to have epidural anesthesia for the birth of their second child.

In 1947, John left the Army and became Chief of Anesthesia at nearby Tacoma General Hospital. There he started the first Anesthesia residency in the state of Washington and developed superb surgical and obstet­rical anesthesiology services. He wanted to develop pain management and organized a group of physicians who met regularly to talk about shared patients with chronic pain. At night, in addition to his full-time jobs as anesthesiologist, father and husband, he reviewed the world’s literature on pain treatment and his own clinical experiences and authored The Management of Pain, published in 1953. This was the first comprehen­sive textbook on pain treatment in any language. It defined the scope of his interests and set forth the challenges for the development of a new discipline. Emma described how he would work in his study in the early hours of the morning while his family slept.

In 1960, John became the Chairman of the Department of Anesthesiology at the University of Washing­ton in Seattle. He held this post until 1978 but as Professor Emeritus continued to work just as hard until his retirement from the faculty in 1992. He really did not stop working full time until just a few months before his death. During his tenure at the University of Washington, John established an Anesthesiology resi­dency and developed his department into one of the premier research, teaching and clinical programs in Anesthesiology anywhere in the world. Trainees came from many countries and throughout the United States. Clinical and basic research flourished, as this was the golden era of the National Institutes of Health. He successfully competed for a prestigious Anesthesia Re­search Center that was funded by the NIH from 1968 until 1978. John was one of a talented group of Chair­persons who catapulted the new University of Wash­ington School of Medicine into a leadership position in American research and medicine. Leadership roles in both American and international anesthesiology associ­ations were a part of his activities. John found the time to continue his clinical research activities, authored numerous books and monographs, hundreds of scien­tific papers, delivered thousands of lectures throughout the world; he also really cared about each and every person he met, whether as patient, student or col­league. He looked after his people.

One of the first things John did at the University of Washington, in collaboration with a nurse, Dorothy Crowley, and a neurosurgeon, Lowell E. White, Jr., was to found a multidisciplinary pain clinic. This group of academic health care providers and researchers met regularly to discuss problem patients with chronic pain and to devise effective treatment strategies. Its existence attracted young anesthesiologists interested in pain management to the University of Washington by the mid-1970s; this was the first formalized training program in pain management. He added research sci­entists to the pain center group. The University estab­lished the Multidisciplinary Pain Center in 1978, recog­nizing John’s accomplishments and wishing to provide a broad base for its support beyond a single depart­ment. Health care providers of all types collaborated in this Pain Center. The reason for our superb facility even at this time is John Bonica. He stepped down as Director of the Pain Center in 1983 and has been a hard act to follow!

John traveled tirelessly in the effort to make pain management a recognized part of health care and to make research on pain a priority item. He lobbied congressmen, cajoled the NIH, visited governmental health officers at home and waited until the time was right to make his biggest move – the establishment of an international organization devoted to pain research and treatment. The time came in 1973 when he person­ally developed the program, invited the delegates and hustled the funding for the famous International Sym­posium on Pain that was held in a former nunnery in Issaquah, a suburb of Seattle. What an exciting week that was! Good science, fascinating clinical insights and the realization that there were people out there who shared the dream. From this meeting came the Inter­national Association for the Study of Pain, the journal PAIN and the national chapters throughout the world. John was our second president, but he was our first, and foremost, force.

IASP was a different organization from its inception. John mandated that it be truly interdisciplinary. Not just a group of physician providers, it was to consist of nurses, dentists, physical and occupational therapists, psychologists, social workers, pharmacists and basic scientists. All professionals interested in re­ducing pain and suffering were invited to participate on an equal basis. His impact in the research arena can be measured to some degree by the fact that a recent Society for Neuroscience meeting had almost as many sessions devoted to pain as to vision. Our Association has been characterized by the cross-fertilization that has occurred between different disciplines and among clinicians and scientists. The proliferation of pain clin­ics and centers throughout the world attests to his impact on the practice of medicine.

The explosion of new science and clinical activities related to pain that began in the mid-1970s caused John to plan a revision of The Management of Pain. It took 5 years to get this book produced in spite of the addition of several colleagues as collaborators. John personally wrote many of the chapters, planned all of the illustrators and edited every word of this 2000 page textbook. Published in 1990, it is a magnificent summa­rization of most of what is known about pain. John has also written the authoritative textbook of obstetrical anesthesiology and hundreds of other key articles; his impact upon medicine has become immense.

Getting others to see the world his way was one of John’s skills. He was able to influence both government and private industry to support his efforts to put pain research and management on the map. The magnifi­cent Bristol-Myers Squibb Unrestricted Pain Research Grants and the Award for Distinguished Achievement in Pain Research were created with his guidance and consultation. Other drug and device manufacturer’s also made significant financial contributions to John’s projects. He gave tirelessly of himself in consultative roles to governments and to industry.

John’s contributions have been recognized through­out the world. He was the recipient of numerous awards, citations and honors, both national and profes­sional. Emma played a role in all of this, as their home was the site of countless dinner parties and meetings that enhanced John’s activities. Her devotion to John’s career and his mission was nothing short of saintly. The University of Washington established an endowed professorship honoring both Emma and John Bonica. IASP has established a fellowship honoring him. There are dozens of Bonica lectureships both in the USA and abroad. His lifelong efforts to reduce pain and suffering through scientific research and better health care delivery are well-known even outside of the anesthesiology and pain worlds.

What many do not know is that John suffered terribly from his own chronic pains. Too many years of wrestling led to arthritic changes in his spine and major joints; he had four spine operations and countless hip and shoulder procedures. He probably had more nerve blocks and trigger-point injections than anyone else on the planet. Sometimes he had to rely on medications to keep going. A trip to Hawaii or to his ancestral home in Filicudi allowed him to swim in the ocean; he always considered this a way of rejuvenating his body. He forced himself to remain active. He was physically strong, not just iron-willed. John contended with his ailments just as he challenged the lack of adequate pain management. Eventually, of course, his body failed him.

John and Emma have earned their peace. Those who pursue knowledge about pain or attempt to relieve pain and suffering in their patients should recognize that John Bonica had the vision and laid out the road that made our careers feasible. Those who travel this route will be forever indebted to him. John and Emma may be gone, but the force and the memories of this magnificent couple remain amongst us.