Aimed to raise understanding of acute pain among the general public and bring to light the challenges clinicians face when treating acute pain.

About this Global
Year Campaign

In the United States alone, nearly 100 million surgeries take place annually. More than 80% of these surgical patients report postoperative pain. Over 70% of emergency department visits are due to pain; acute headache alone accounts for 2.1 million of these visits. Despite substantial advances in pain research in recent decades, inadequate acute pain control is still more the rule than the exception. Numerous studies show that fewer than half of postoperative patients receive adequate pain relief. Patients arriving at emergency departments with significantly painful conditions fare no better, as emergency medicine physicians tend to underuse pain medications. Acute pain is also a common problem in family practice, sports medicine, and especially in internal medicine.

Though adequate acute pain treatment can improve patient quality of life and satisfaction with care, as well as enhance clinical resource management and reduce long-term costs of care, acute pain remains undertreated. The Global Year Against Acute Pain campaign aimed to raise understanding of acute pain among the general public and bring to light the challenges clinicians face when treating acute pain. 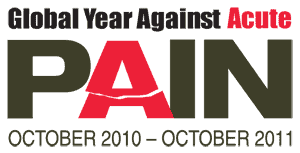 By providing free factsheets, publications, and more, we hope this campaign helps lead to better patient outcomes, and contribute towards IASP's vision of global pain relief.

The Australian and New Zealand College of Anaesthetists (ANZCA) has published a document with the most up-to-date science and practice on acute pain management. This world leading document, endorsed by the NHMRC, IASP, and many national and international bodies, provides the scientific evidence for the practice of acute pain management. Visit the ANZCA website to download Acute Pain Management: Scientific Evidence (3rd edition) 2010 as a PDF.

While you're there, download Managing Acute Pain - A Guide for Patients (2005), a booklet derived from the document Acute Pain Management: Scientific Evidence (Second Edition). This document aims to help health professionals work with patients to manage acute pain effectively and safely.

Other Organizations Dedicated to Pain Research, Management, and Relief

American Headache Society
The American Headache Society® (AHS) is a professional society of health care providers dedicated to the study and treatment of headache and face pain. Founded in 1959, AHS brings together physicians and other health providers from various fields and specialties to share concepts and developments about headache and related conditions.
www.americanheadachesociety.org

Help for Headaches
Help For Headaches is a London based non-profit organization and a registered Canadian charity that is committed to educational services for those suffering from and treating headaches.
www.headache-help.org

National Headache Foundation
The National Headache Foundation exists to enhance the healthcare of headache sufferers. It is a source of help to sufferers' families, physicians who treat headache sufferers, allied healthcare professionals and to the public. The NHF accomplishes its mission by providing educational and informational resources, supporting headache research and advocating for the understanding of headache as a legitimate neurobiological disease.
www.headaches.org

Pain Concern
Pain Concern provides information and support for pain sufferers, those who care for them and about them.
www.painconcern.org.uk

Physiotherapy Pain Association
The PPA was formed to bring together and provide information for Physiotherapists with the common interest of managing patients with both acute and long term pain.
www.ppa.csp.org.uk

World Health Organization
WHO is the directing and coordinating authority for health within the United Nations system. It is responsible for providing leadership on global health matters, shaping the health research agenda, setting norms and standards, articulating evidence-based policy options, providing technical support to countries and monitoring and assessing health trends.
www.who.int

Psychological Interventions for Acute and Chronic Pain in Children

Africa and the Middle East

On September 23, 2011, Dr. Ahmed Fawzi El Molla hosted a "Summit on Acute Pain Service" in cooperation with the Alexandria Society of Anesthesia. The day's program included presentations from pain management experts followed by hands-on sessions on patient-controlled anesthesia and ultrasonography.

The Iranian Pain Society created a poster to help spread awareness of the current campaign. 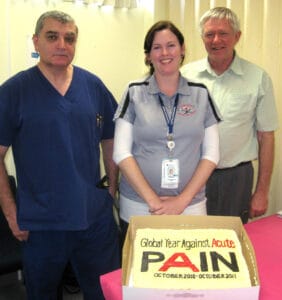 On June 17, 2011, members of the Acute Pain Service at Mackay Base Hospital in Mackay, Queensland, Australia, held a "Pain Launch" to raise awareness of their services and to promote the Global Year Against Acute Pain campaign. During the event, nursing leaders at the facility and members of the Anaesthetic Department discussed the importance of good pain management and encouraged simple measures such as regular pain assessment on all patients. Attendees received Pain Resource folders to assist acute pain management in their units/wards, and a cake displaying the Global Year campaign logo was enjoyed by all.

The Faculty of Pain Medicine (FPM) of the Australian and New Zealand College of Anaesthetists (ANZCA) distributed a press release announcing the 2010-2011 Global Year Against Acute Pain and their commitment to educating doctors about treating acute pain.

The Indian Society for the Study of Pain (ISSP, IASP Chapter), in conjunction with the Brufen Foundation, launched the Global Year Against Acute Pain on Tuesday, October 19, 2010, in New Delhi, India, with a press conference at the Indian Islamic Cultural Center. Approximately 35 journalists attended, with 5 representing television networks. Two lectures on acute pain were delivered, and a set of guidelines about backache were presented. Definite acute pain protocols will be launched in Chandigarh at the ISSP conference in February 2011. 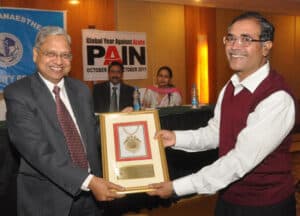 On November 20, 2010, the Jaipur City Branch of the Indian Society of Anaesthesia organized a meeting and lecture focused on acute pain management. Indian Society for the Study of Pain (IASP Chapter) President P.N. Jain delivered the keynote address. All speakers received a plaque commemorating the event.

Pictured right: Dr. P.N. Jain receiving his plaque for his participation in the event. Click on the photo to view a larger image.

On February 2, 2011, The Croatian Association for the Study of Pain hosted a mini-symposium on the topic of acute pain.

The Finnish Association for the Study of Pain hosted a cancer pain and acute pain management multidisciplinary educational event in Tampere, Finland, October 27-28, 2011.

On October 18, 2010, the French Chapter organized the Fifth National Day for Pain Prevention. On this day, the pain clinics in France were open to the public in each region; 86 towns participated in this event.

On September 20, 2011, the German chapter of IASP (Deutsche Gesellschaft zum Studium des Schmerzes e.V.) held a satellite meeting, "Acute Pain Management: Yes we can?" in conjunction with the EFIC meeting in Hamburg, Germany. It was an international meeting that gave an update on acute pain mechanisms, pharmacological treatment options, evidence based recommendations, guidelines, management of special acute pain situations and other aspects of acute pain. In addition, it was a forum to discuss clinical and scientific questions related to acute pain and to meet experts, friends and colleagues interested in the same topic.

The Professional Health Association (PHA) in Kosovo held a conference from September 9-11, 2011, in Prizren, Kosovo, for which the core topic was acute pain. Visit the PHA website for more information: www.pha-ks.com

The Spanish Society of Painperformed a study to determine the current status of pain treatment and diagnosis in the hospitals' emergency services. This scientific study was  accomplished in collaboration with the Spanish Society of Emergency. The results were presented at the World Day Against Pain event in Madrid on October 17, 2011.

The Spanish chapter of the IASP is also hosted a short film contest with the topic: Against Pain. For more information, visit the society website: www.sedolor.es

Latin America and the Caribbean

The Sociedade Brasileira de Estudo da Dor (SBED), the Brazilian chapter of IASP, created a poster in honor of the Global Year Against Acute Pain.

Letter from the President

Letter from the President

I am pleased to announce the 2010-2011 Global Year Against Acute Pain campaign. This year, the IASP-sponsored initiative will draw attention to the persistent problem of acute pain, the most commonly experienced pain (e.g. surgery, childbirth, trauma). Although acute pain is treatable with currently available medications and techniques, a large gap between evidence and practice results in widespread under-treatment.

I am calling on your voices to help address that gap by:

Throughout the campaign, which will run through late October 2011, IASP members and chapters will organize meetings, symposia, patient-education events, publications, and many other efforts exploring different aspects of acute pain. In addition, IASP and its chapters will sponsor media efforts highlighting some of the challenges posed by acute pain (such as differences between individuals, why acute pain sometimes persists, and how simple and inexpensive methods can be effective if used appropriately).

I encourage you to get involved in any such activities planned in your area. Whether you help to plan and organize an event, deliver a talk related to acute pain, or attend a meeting to show your support, your participation is essential to the success of the Global Year Against Acute Pain. Please contact your local IASP chapter, or the IASP office at IASPdesk@iasp-pain.org, for more information on scheduled activities in your area and other ways to get involved.

Be sure to visit these Global Year web pages regularly, where you will find a series of fact sheets focusing on many topics and issues surrounding acute pain—furnished in English, Arabic, Chinese, French, Spanish, and other languages. The fact sheets, campaign posters, logos, and other resources are available to all at no cost. In December, IASP will introduce a discussion forum on the topic of acute pain—a forum for all IASP members who want to participate in learning about research and treatment for acute pain. You can also register to receive Global Year Updates (via email) with the latest news and campaign resources.

With everyone’s support and active participation, we can do much to minimize the pain and suffering of those experiencing acute pain. IASP would also like learn of real success stories where chapters or hospitals have made special efforts and improved the management of acute pain. Let’s make this a great year!